Today is the anniversary of the formation of the Australian Republic Movement, established on 7 July 1991. The first national chair was the author Tom Keneally. The single goal of the organisation was for Australia to become a republic, writes history editor Dr Glenn Davies.

REPUBLICANISM EMERGED as an issue of major public debate during the 1990s, when the popular definition of “republic” was simply the removal of the British monarch as head of state and was viewed as the last step in Australia’s political development.

The Australian Republican Movement began over lunch at the residence of the former Premier of New South Wales, Neville Wran. In 1987, Wran had publicly stated his support for Australia becoming a republic and nominated 2001, the centenary of Australia’s federation, as an ideal date. He said that he expected moves towards a republic would gain ground during the 1990s. Wran was supported at the time by Prime Minister Bob Hawke. On 7 July 1991, a group of prominent citizens held a meeting in Sydney to launch a republican movement under the chairmanship of author Thomas Keneally, and included many eminent persons from the political left and cultural centre of Australian society.

The question of whether or not Australia should be a republic has been debated for longer than most people imagine. Australians have long discussed the idea of replacing the constitutional monarchy with a republican constitution even during the 19th century, before federation in 1901.

In early colonial NSW, the American rejection of British rule and the violence of the French Revolution were well known. Republicanism was often used as political language to challenge government authority and only hardened the resolve of those in power to savagely repress any supporters. In 1795, the “Scottish Martyrs” arrived. The many Irish convicts brought with them antipathy towards the British. Convict uprisings such as the 1804 Castle Hill rebellion were labeled republican. However, in most cases, the convicts were not looking for political change, they just wanted to return home. 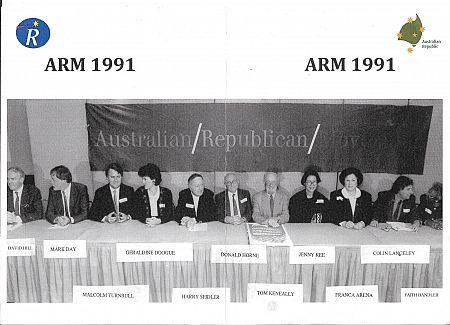 The period from 1840 to 1856 was one in which colonial grievances reached their height. In Sydney in 1850, the outspoken firebrand Reverend John Dunmore Lang, The People’s Advocate editor E.J. Hawksley and the young Henry Parkes campaigned through the Australian League for a republican form of government when the British Government wanted to reintroduce transportation of convicts. In the early 1850s, during the gold rushes, there was an influx of large numbers of migrants from Europe and the United States to Victoria, many of whom were sympathetic to republicanism. This caused British officials to fear the possibility of revolution. In 1854, the Eureka Stockade rebellion at the Ballarat goldfield was ultimately a republican desire for government by the people. However, the urgency vanished when responsible government was granted in 1856.

In the latter half of the 19th Century, republicanism became strongly anti-monarchical and nationalist in sentiment. The “inevitability” of an Australian republic became a common theme. In the late 1870s, the traditional Irish enmity towards British authority can be seen in the republican sentiments expressed in Ned Kelly’s Jerilderie Letter and, later, in Kelly gang member Joe Byrne’s Declaration of the Republic of North East Victoria.

During the 1880s, there were 15 republican organisations, and 20 newspapers or journals in cities and major country towns. This republicanism was often focused on struggles between capital and labour. From 1884, The Bulletin expounded a strong anti-monarchical attitude. In 1887, republicans twice defeated attempts at Sydney Town Hall to pass a loyal resolution congratulating Queen Victoria’s Jubilee, resulting in an open clash between thousands of demonstrators. Soon after, Sydney had a Republican Union and a republican journal led by Louisa and Henry Lawson, and George Black. It was in The Republican that Henry Lawson first published 'A Song of the Republic'.

In 1890 and 1891, the Australasian Republican Association on the north Queensland goldfield of Charters Towers had over 700 members, published a regular journal and established republican branches. The Australian Republican editor, F.C.B. Vosper, published an inflammatory editorial at the height of the 1891 Shearers’ Strike calling for revolution and the declaration of the republic. He was arrested and tried for seditious libel but eventually acquitted.

The Commonwealth of Australia was the title chosen for the new nation at the 1891 National Constitutional Convention. Although there was controversy over the republican ancestry of the term, it was the title accepted in 1901. Prior to the mid-1890s, republicans had insisted that national independence could only be achieved by Australia’s secession from the British Empire. However, by 1901, federation was seen as the first step on the road towards political independence.

An Australian republic: 150 years in the waiting https://t.co/gpakjIcGzH via @smh

In the 1960s, republican activity was restarted by authors Geoffrey Dutton and Donald Horne. At the same time, the student magazine, Oz, lampooned the monarchy. A decade on, the dismissal of Prime Minister Gough Whitlam by the appointed Governor-General on 11 November 1975 outraged many Australians. The 1975 Constitutional Crisis drew attention to Australia's Constitutional arrangements and, since those turbulent days, several notable Australians declared a commitment to an Australian republic. There were many Town Hall meetings and calls to "maintain the rage". During these years, the Australian Labor Party edged towards declaring itself for the republic. This it eventually did in 1982.

Republicans proposed 1988 for the establishment of an Australian republic. This was not to be.

In the 1990s, the popular definition of “republic” was simply the removal of the hereditary monarch. This was seen as the last step in Australia’s political development. In 1991, the Australian Republican Movement was established. In 1993, Prime Minister Paul Keating formed the Republic Advisory Committee, led by Malcom Turnbull, to prepare options on how to achieve a republic with minimal constitutional change. In June 1995, Keating announced his goal of a republic with an Australian Head of State.

The 1998 Constitutional Convention helped to strengthen the debate for a republic. While the republic was a major issue in the late 1990s, the debate caught up in an argument about the best selection method for the Head of State. It was on this crucial issue republicans divided. In the absence of a proper process to resolve those differences, Australians rejected the 6 November 1999 referendum 55 to 45%. No political leader has subsequently emerged who wants to find common ground amongst Australians and break the logjam. This is where it became frozen for more than a decade.

During 2012, the A.R.M. undertook a thorough review of why the republic issue had stalled. A new campaign was trialed in Tasmania in late 2012 and a new “listening” campaign was rolled out across the country in 2013 on university campuses, at multicultural festivals and other community events in an effort to engage all Australians in a conversation to find as much common ground as possible about who we are as a nation. The A.R.M. asked thousands of people, “Who do we want to be?” Overwhelmingly, people said, “free, fair, multicultural… and Australian”. It is in such a consensus response that lays the potential for Australian unity. This is a unity that can only be given expression by an Australian as our head of state and all of our national institutions in our own name.

A (hybrid)  model for an Australian republic that can unite republicans and win a referendum by Jones & PIckerting January 2018.   https://t.co/aNyNWvGvw4 via @ConversationEDU

At the end of 2013, UMR conducted a poll following Governor-General Quentin Bryce’s comment, in which she expressed her hope that:

“One day, one young [Australian] girl or boy may even grow up to be our nation’s first head of state.”

Those in agreement, 48%, far outnumbered those opposed, 32%. These results were in a similar range to most other polls that show strong support for a republic. So, even with the issue off the agenda for more than a decade, half of Australia supports becoming a republic, there are many undecided and the status quo has no capacity to achieve majority support on the yes/no question.

31 January 2014 was the 20th anniversary of the new citizenship oath, which replaced a mandatory pledge of loyalty to the Queen with these words:

"I pledge my loyalty to Australia and its people, whose democratic beliefs I share, whose rights and liberties I respect and whose laws I will uphold and obey."

In 2015, distinguished author, journalist and Australian rugby union international Peter FitzSimons was appointed head of Australia's Republic Movement. A passionate republican, FitzSimons is well known through his regular Sydney Morning Herald column, as well as his many books. As one of our foremost writers of Australian history, FitzSimons has captured some of the pivotal moments that have shaped our national identity.

The political landscape in Australia is definitely changing. The push for a republic has gone from strength to strength in recent years with support from a resurgent membership, the majority of federal parliamentarians, and Prime Minister Malcolm Turnbull and Federal Opposition Leader Bill Shorten.

Over the last few years, Australian media has become a cheer squad for “celebrity” monarchy, framing the republic debate as all about a family in Britain, when actually our great national cause is about the sovereignty of the Australian people. The monarchy is clearly no longer an institution that can unite Australians. It’s broken. The monarchy sits above our system of democratic government, but cannot represent us, our identity or our values as a nation.

Bill Shorten’s 29 July 2017 republican statements are in line with the timelines proposed by the Australian Republic Movement.

These include a plebiscite in 2020 that asks the people of Australia a very simple question:

"Should Australia have an Australian head of state?"

The A.R.M. is calling for a non-binding vote – a plebiscite – by 2020 on the question of whether Australians want one of their own in the job.

There is a momentum happening around Australia. With 2020 marking 250 years since Captain James Cook landed, surely it must be time for us to stand on our own two feet.

This is our great, unfinished project. 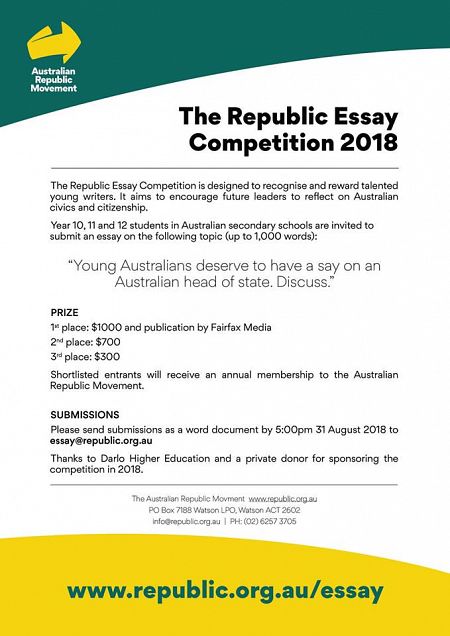