Tony Abbott swears Australia back to the past

There's been much controversy about PM Tony Abbott's backward looking ministry, with only one woman and no science minister included. Overlooked by many was that even the oath he swore took Australia backwards, says Dr Glenn Davies.

Responding to this, National Director of the Australian Republican Movement, David Morris, said in a statement:

Prime Minister Abbott today followed his conservative predecessor, Prime Minister Howard, by swearing allegiance to Queen Elizabeth II at the official swearing in of the new Government in Canberra.

'This is looking backwards when Australia should be confidently facing the future .... It’s no longer appropriate in today’s Australia to have divided loyalties. Back in the early twentieth century, Australians were still called “British subjects” and many still sang “God Save the Queen” but no more. Today our loyalty and our identity is Australian, not colonial.

'Australia should always come first for our elected representatives.

'Our nation’s values are democratic, as evidenced by the recent elections for both houses of Parliament. To have an institution sitting above our Parliament, over which a foreign family is born to rule, is out of date with our identity as an independent nation.'

It’s worth remembering that on 3 December 2007, one week after the election of the new Rudd Federal Labor government, a ‘very republican moment’ occurred when Kevin Rudd and his ministry swore an oath to

"...the Commonwealth of Australia, its land and its people."

The significance of this moment was the new Federal ministers swore an Oath under Section 62 of the Australian Constitution to the people of Australia rather to Queen Elizabeth II, a foreign monarch.

When Kevin Rudd was sworn in as the 26th Prime Minister of Australia, wearing R.M. Williams boots and a grin as wide as the verandah of his suburban Brisbane Queenslander, he declared:

“I, Kevin Michael Rudd, do swear that I will well and truly serve the Commonwealth of Australia, her land and her people, in the office of the Prime Minister, so help me God.”

Taking the office of Prime Minister (Executive Councillor) involves swearing an Oath of Allegiance or Affirmation. However, under Section 62 of the Constitution, the form of the oath of office is not prescribed for a minister but by the Governor-General on the advice of the Prime Minister.

Of course, the new Oath was given to the Governor-General on Rudd’s advice, yet he could not have technically given that advice until he became an Executive Councillor. No doubt, this advice was relayed earlier, perhaps through or with the approval of the caretaker, John Howard. In taking this Oath, Rudd acknowledged the republican ideal that ultimate political authority lays with ‘the land and the people’ of Australia rather than with the British monarch.

The Rudd Oath should not be confused with the Oath of Allegiance or Affirmation under Section 42 of the Constitution required to be made by a Member of Parliament or Senator before taking his or her seat.

Section 42 involves swearing or affirming to

'...be faithful and bear true allegiance to Her Majesty Queen Elizabeth the Second, Her heirs and successors according to law.'

This Oath was also used for ministers until the Keating Labor government removed reference to the Sovereign. However, with the election of the Howard Liberal government in 1996, the Oath to the Queen was restored but without any reference to 'Her heirs and successors'.

The real issue behind the question of the Oath of Allegiance or Affirmation concerns where political authority ultimately resides. Does it originate from the divine, from God or from ‘the land and the people’?

Should Australian political authority continue to be derived from the British monarch and, ultimately, God — or should it be acknowledged that popular sovereignty resides in ‘the land and the people’ of Australia? This is a fundamental question for the republican debate.

Republicanism does not acknowledge God as the ultimate source of authority in our society, rather it is ‘the land and the people’. 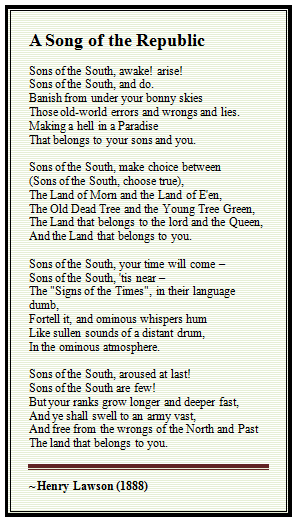 The ‘currency lads’ of the mid-nineteenth century would often use the toast ‘To the land, boys’.

Prime Minister Gillard followed the lead set by Rudd, however Abbott has chosen to go back to the past where a foreign family born to rule over Australians is considered acceptable and, indeed, the normal state of affairs.

It is time all Australians advocated for a fully and unambiguously independent Australia.