The ‘History Wars’ of the 1990 and 200s was fought over the re-writing of history to suit political visions. One history battle occurred when Paul Keating’s interpretation of Australian history was undermined by bringing into question the collected work and the national loyalty of the leading figure in the radical nationalist school of history, Manning Clark. Desmond Ball re-engaged this battle in The Weekend Australian, 28/29 May 2011 when he questioned Clark’s political allegiance and wrote “I believe academics have a responsibility to tell the absolute truth, no matter how unpalatable”. These revelations reopen wounds inflicted during the ‘History Wars’, writes history editor Glenn Davies.

The republican historian Mark McKenna’s recent biography of Manning Clark, An Eye for Eternity (2011) appears to have been the catalyst for others reflecting on Clark’s past. Clark’s republican leanings were evident from not only his public support at Sydney Town Hall meetings in the years after the Whitlam Dismissal in 1975, but also through his romanticism of Henry Lawson and the Labor tradition of the ‘legend of the 1890s’. In 2008, the republican Professor of English, Brian Matthews wrote in Manning Clark. A Life of how he was one of the most influential Australian intellectuals of the last half century. His political pronouncements were often highly provocative and his opinions and oracular prophecies infuriated conservatives and made him a controversial figure. Desmond Ball reveals in the Weekend Australian that shortly before Clark’s death in 1991, during a chance meeting at a colleague's funeral, Clark detailed the intimate links between his lifelong friend, Ian Milner, and the Soviet Union's KGB. Clark always denied any knowledge of Milner’s communist activity. In raising the question of what happens when historical truths are denied and historical records are used to deceive, Desmond Ball’s article has re-ignited the spectre of the ‘History Wars’ of the 1990s.

In the 1990s and 2000s, Australian public life had been preoccupied as never before with arguments about the past. Late in 1988, the bicentennial year, the republican historian John Hirst made the complaint that the new radical historians were using a ‘black spot’ treatment as justification for extrapolation, saying that for this

“…new generation of radical historians Australia’s past is nothing but bad.”

This positive/negative dichotomy was discussed by historian Geoffrey Blainey in his 1993 Latham Lecture. Blainey’s lecture constituted a reply to the new generation of critical historians. He stated that while the convict era was a “source of shame or unease ... Now the very opposite is widely preached” and labelled the two poles as the ‘Three Cheers’ view and the ‘Black Armband View’. In 2003, Peter Nicholson depicted prime ministers Paul Keating and John Howard ready to cross swords during the ‘History Wars’. Loaded into the cannons are two of Australia’s most eminent historians – Manning Clark and Geoffrey Blainey being used as ‘cannonballs’ in their fight over Australia’s historical record. The battle lines were being drawn in the coming ‘History Wars’ of the 1990s and 2000s.

The 1990s saw competing arguments on the extent of Australia’s republican past. During this decade a retrieved Australian republican history was established, resulting in a strong republican historical narrative. This narrative was used in politically partisan ways during the ‘History Wars’ of the 1990s and the first years of the twenty-first century. This was a period of intellectual debates about what an Australian republic should look like, with a focus on the Head of State.

In late February 1992, then prime minister Paul Keating argued that Australians had been betrayed in 1942 by British actions in attempting to redirect the 6th Division back to the European war theatre rather than to Australia’s defence as promised. This was after the uproar in Britain that had accompanied Keating’s alleged touching of Queen Elizabeth II during a Royal visit earlier that month. On the specific issue of British betrayal, Keating’s interpretation was assisted by David Day’s revisionist accounts of Anglo-Australian relations during World War II, set against a more general backdrop offered by Australian historian Manning Clark. When the federal Liberal Opposition attempted to use the public outcry in Britain to censure Keating, he replied that the Liberal Opposition

“...were relics of the past, xenophobes who remained British to their bootstraps despite that nation’s decision not to help Australia defend itself against the Japanese advance in 1942.”

The understanding of republicanism in Australian history since World War II thus became linked to recent political concerns. Keating used the same nationalistic arguments as the radical republicans of the 1880s and 1890s.

The renewed debate about Australia’s constitutional status and Paul Keating’s much more polite but similarly nationalistic speech in front of Queen Elizabeth II was responded to by the federal Liberal Opposition by indicating that in government they would be unlikely to take any serious actions to reverse the historical trend of marginalisation of Imperial connections. Keating’s response to the public outcry demonstrated what Australian historian Geoffrey Bolton identified as

“...a readiness uncommon in recent prime ministers to take note of recent trends in historiography and to use them in the service of promoting a particular myth of nationalism.”

Keating was using radical nationalist rhetoric as a political tool.

Throughout his life, the Australian historian Manning Clark had dismissed conservative politicians and those who admired them as “grovelers, straiteners and walnut hearts”. During his prime ministership, Paul Keating adopted Clark’s language as his own. Keating’s regard for Clark was reciprocated. However, conservative forces in Australia eventually took offence to what federal liberal John Howard called “the essentially negative view of our history”. The result was the publication of Peter Ryan’s essay on Manning Clark in Quadrant in 1993, two years after Clark’s death. In this essay, Ryan dropped what he referred to as the “long overdue axe” on “tall poppy” historian Manning Clark. Ryan argued that Australian history was never as black “as Clark so wickedly painted it”. In 1996, the Courier Mail would further question Clark’s motives and credentials as an historian. The rationale was: destroy Clark, destroy Keating, and destroy republicanism. In response, Humphrey McQueen argued in Suspect History (1997) that Clark’s critics were motivated by political and material self-interest.

The Australian historians John Hirst and Alan Atkinson participated in an intellectual debate in the mid-1990s over the role of the monarchy and the extent of republican elements within the Australian constitution, the Australian community, and Australia’s past. In The Muddle-Headed Republic (1993), Atkinson challenged the Australian Republican Movement’s “new style of republicanism. He charted clearly the origins of Australia’s monarchy, arguing that monarchy and royalty are two different things. In March 1994, John Hirst published the republican side of the debate in A Republican Manifesto. He stated “…there is one last public office which we musttake out of the British hands and put it into Australian”. As a member of theRepublic Advisory Committee, Australian Republican Movement convenor forVictoria, and an advocate of minimal republicanism, Hirst was taking a positionwithin practical politics on the republican issue. Theintellectual debate between Atkinson and Hirst was an example of the emergingpublic face of ‘The History Wars”. 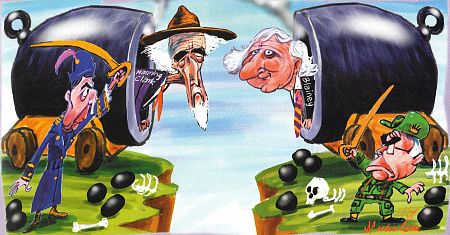 Australia appears to still be fascinated with our Cold War history. This can be seen through the public interest with the issues swirling around the political allegiance of one of Australia’s greatest historians, Manning Clark. Clark’s most enduring legacy is his magisterial six-volume History of Australia. In it he reshaped the now familiar story of Australia’s modern evolution: from the First Fleet’s arrival through to the emergence from the Great Depression and the imminence of a new world war. But behind his dramatic narrative is a flawed man. It is these flaws that allow him to explore the great flawed men of our own history: Phillip, Macquarie, Burke and Wills, Bligh, Wentworth, Henry Lawson. In diminishing Australian sources of republican argument, such as Clark’s historical body of work, the battle for Australia’s past continues.