Right across the country this Australia Day, the Australian Republic Movement is taking to the streets with the message loud and clear that Australia is well and truly ready to stand on its own two feet with its own Australian head of state, writes history editor Dr Glenn Davies.

AUSTRALIANS ARE PROUD of their country and what it means to be an Australian. Australia has emerged as a prosperous and independent nation in so many ways. Yet it still carries the embarrassment of having a head of state that fails to reflect the modern, diverse and independent country we’ve become.  This Australia Day the Australian Republic Movement (ARM)  is calling on all Australians to proudly declare to put our nation and its people first and support the campaign to have a head of state who can do the same.

Two years ago today,then Prime Minister Tony Abbott almost united the nation with his decision to mark Australia Day by his infamous “captain’s pick” knighthood of the Queen’s consort Prince Philip. Between waving away flies at a traditional barbecue, the nation was united in scratching its head in wonder and asking: what the ...?

On Australia Day last year, the nation’s premiers and chief ministers again united the nation, in calling for an Australian to be our head of state. This time around, there was no need to scratch heads or ask why. Indeed, it was a hard-to-argue proposition and time to ask why not? Why doesn’t this nation – apparently, the most egalitarian on the planet – allow one of its own to be head of state?

This Australia Day, the ARM is taking to the streets across Australia, including at Commonwealth Park in Canberra, Federation Square in Melbourne, Southbank in Brisbane, Circular Quay in Sydney, as well as in Perth, encouraging Australians to declare their commitment to Australia and its people above all others — something the British Queen, despite being Australia’s head of state, could never do.

The political landscape in Australia is definitely changing. The push for a republic has gone from strength to strength in recent years with support from a resurgent membership, the majority of federal parliamentarians, the Prime Minister Malcolm Turnbull and Opposition Leader Bill Shorten.

On Australia Day 2016, Australia's premiers and chief ministers made public declarations supporting an Australian head of state. The Prime Minister, Federal Opposition Leader, six premiers and the Chief Justice are now all declared republicans. The ARM has now confirmed most Federal MPs and senators want to ditch the monarchy.

The Guardian states that, in all, 81 out of 150 members of the House of Representatives, and 40 out of 76 members of the Senate have declared their support for an Australian republic. According to the ARM, the number may be even higher as 58 lower house MPs have not stated a position on the republic, with only 11 lower house MPs listed as committed monarchists. In the upper house, 21 senators were undeclared or undecided and only 15 favour the monarchy. This Australian Federal Parliament has a 53.5% majority of declared support for the creation of an Australian republic.

The ARM figures show the Greens are the most pro-republic, with 100% in support; followed by Labor (93%). Just 19 Coalition parliamentarians are openly in support of a republic (17%), although most, 65, are undecided or undeclared. If Labor MPs are bound to support the republic, support climbs to 86 in the lower house and 42 in the Senate, or a 56.6% republican majority.

In a new poll released by the ANU Australian Electoral Study, support for an Australian head of state has hit 53% (reflecting the position of the federal parliament) and outpointed the 51% result in a Newspoll earlier this year.

The new numbers and poll were revealed on the eve of Prime Minister Malcolm Turnbull's highly anticipated speech to the ARM's 25th anniversary dinner.

ARM national chair Peter FitzSimons said the dinner would “honour those who’ve got us to this point” and that Mr Turnbull was “at the forefront of our founding fathers and mothers”.

“The dinner is also a moment for the ARM to outline its vision for the future. A vision in which Australia takes the lead and completes the journey to full and final independence."

On Saturday, 17 December 2016 in the Great Hall at the University of Sydney, he outlined a road map toward an Australia head of state. If you haven't seen it, you can read the speech here.

"... tonight we are re-energised as never before." 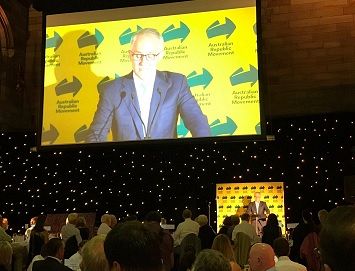 However, the PM also made it clear in his speech that this journey should not begin until the end of the Queen's reign.

With respect to Prime Minister Turnbull, we disagree.

Becoming a republic is about Us, the Australian people. We can only assert our independence by ushering in an Australian head of state on our own terms and at a time of our choosing.

Our challenge as republicans is to change Malcolm's mind.

Luckily, the PM himself told us how we can do this:

"... house by house, street by street, and suburb by suburb, we must make the case to our fellow citizens."

It’s a great time to be a republican in Australia. If there was any doubt, it is now clear that there is political consensus on the question of an Australian republic. Make no mistake, the ARM is back in business. With majority support in both houses of the Federal Parliament, Bill Shorten ready to go and the PM announcing his road map to an Australian head of state, it’s full steam ahead.

It’s super easy; all you need to do is go to declare.republic.org.au . 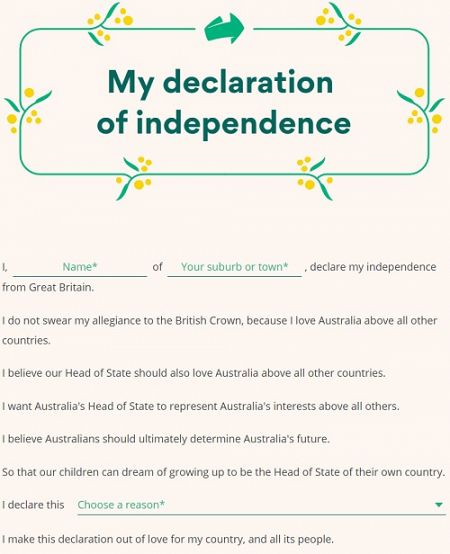 (Click on the image above to declare your independence)

So this Australia Day, before you tuck into your lamb chops (or vegetarian sausages), please take a moment to consider that Australia should have a head of state that is one of us.

Better still, once you've signed the pledge, mention it around the BBQ and see if you can't convince another five of your friends and family to do the same.

It appears the points of the Southern Cross are coming into alignment.

Just called on the Queen to lift secrecy on her 1975 corro with Gov-Gen John Kerr. Join me? #auspol https://t.co/ggxiXSngHh via @AusRepublic