Distinguished author, journalist and Australian rugby union international Peter FitzSimons has been appointed head of Australia's Republican Movement as it gears up for a high-profile campaign ahead of the next Federal election. History editor and ARM Queensland convenor Dr Glenn Davies reports.

Peter FitzSimons has captured through his prolific pen some of the pivotal moments that have shaped our national identity. From now on he will be employing his considerable talents to making history as well as recording it by leading the Australian Republican Movement in its quest for an Australian head of state.

Author and journalist Peter FitzSimons AO has been appointed the new chair of the Australian Republican Movement (ARM) as it overhauls its team and reboots plans for a high-profile campaign ahead of the next Federal election.

A passionate republican, FitzSimons is well-known through his regular Sydney Morning Herald column, as well as his many books. As one of our foremost writers of Australian history, FitzSimons has captured some of the pivotal moments that have shaped our national identity.

From his publisher, Random House:

'Peter is Australia's biggest-selling non-fiction author of the last ten years. Peter was named a Member of the Order of Australia for service to literature as a biographer, sports journalist and commentator, and to the community through contributions to conservation, disability care, social welfare and sporting organisations.'

He is also a regular TV commentator, a former Radio 2UE presenter and is also a former national representative rugby union player, playing seven test matches for the Wallabies.

Peter FitzSimons replaces former West Australian premier Professor Geoff Gallop as Chair of the Australian Republican Movement. FitzSimons said he will lead a renewed campaign for an Australian head of state. The ARM is calling for a non-binding vote – a plebiscite – by 2020 on the question of whether Australians want one of their own in the job.

Indeed, now is a great time to be a republican, said FitzSimons:

"The reaction to the knighting of Prince Philip earlier this year demonstrates how deeply republican sentiment runs in this country."

More recently, the Federal Labor Opposition leader Bill Shorten has signalled his intention to advance an Australian republic should he win office.

But regardless of who wins the next Federal election, FitzSimons believes Tony Abbott is likely to be Australia’s last monarchist prime minister. 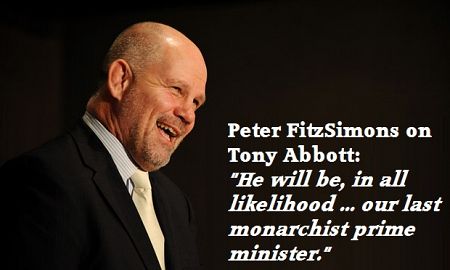 Whichever way you look at it, Australia’s final step toward independence is on the horizon.

This announcement caps off an exciting couple of months for the Australian Republican Movement, which has also included the appointment of new national director Tim Mayfield.

'Australians need to move past the royal family "cult of the celebrity".'

But we’ll need all the help we can get. Not even a former Wallaby like Peter FitzSimons can get this one over the line on his own. Instead, winning an Australian republic will take this country’s best team effort yet.

There is a momentum happening around Australia. This is our great unfinished project and FitzSimons and Mayfield have the passion and wherewithal to bring it off.

If you are in or around Brisbane this week, you can find out more about the Australian Republican Movement – as well as meet Queensland convenor Dr Glenn Davies and many other passionate republicans – at a discussion evening on Thursday 30 July at the Pineapple Hotel in Kangaroo Point from 6pm. For more details, please click here.