One of the solutions to the critical criminal overcrowding problem in British gaols in the late eighteenth century was a convict settlement on the Island of Lemain in the River Gambia. The unusual twist of the proposal was “the Establishment of a Colony of Felons under no Coercion or Government.” The River Gambia settlement was to be, in essence, a convict republic under the protection of the British Crown. Of course, it didn’t work, writes Glenn Davies. 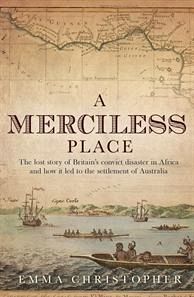 THE Transportation Act of 1718 provided England with a cheap method of getting rid of her convicted criminals. A simple, orderly and profitable trade in convicts was established under the Act.  Between 1718 and 1775 Britain shipped approximately 50,000 convicts - 1,000 a year - to her American colonies where they were sold to planters and worked alongside Negro slaves shipped there from Africa.

The War of American Independence 1775-1783 interrupted the convict trade. Britain lost the American war. The British authorities had trouble finding accommodation for felons who had previously been sent off to labour in the plantations. By the end of hostilities, approximately 10,000 criminals reprieved from death awaiting transportation, were festering and dying in gaols and on hulks - filthy floating prisons moored along the Thames River.  The situation worsened when Britain refused permission for convict-soldiers impressed into military service during the conflict to return to England. All could not be dealt with by housing them in old ships moored in the Thames. The Home Office was responsible for finding alternate destinations for an increasing army of criminals respited from death and commuted ‘for transportation’ during the conflict. Home Secretary Lord Sydney and permanent under-secretary Evan Nepean investigated the suitability of establishing prison settlements in Africa.

Between 1783 and 1786, the British Government was lobbied with conflicting ideas for the transportation of convicts. In response, from April to July 1785 the Beauchamp Select Committee considered evidence on the most desirable place for a convict settlement. The Committee entertained the proposal for “the establishment of a Colony of Felons under no Coercion or Government”. The convict settlement of Lemane Island, several hundred kilometres up the Gambia River, was initially given surprisingly serious consideration.

The language used by eighteenth century Englishmen relied heavily on classical republican principles. They viewed that ‘true’ republican government was based on a balance of the threefold order – Kings, Lords and Commons, the classical model of a republic which did not necessarily exclude monarchy – the separation of powers, civic virtue, and the resistance to arbitrary rule. This can be seen as reflected in Enclosure No.1 of the plans:


“...it seems rather to be the General Opinion, that they should be left entirely to themselves and before they leave the river, be directed to elect a Chief and at least four more as a Council, out of their own Body, and to invest such Chief with powers to appoint any subordinate officers that might be necessary for the Regulation of their affairs, and to have Charge of the Provisions and Property provided for their Use, and also to try and punish any of them for Crimes.”

The “Body” were the convict community. This begs the question of how the convicts were expected to undertake their election. Interestingly, the British Government were advocating the institution of an executive branch, the “Chief”, legislative branch, the “Council of four”, and judicial branch, “subordinate officers” appointed to try and punish any of them for “Crimes”. Such a separation of powers had possible republican overtones. The historian Alan Atkinson believed the ‘convict republic’ the British Government was advocating was not to be completely sovereign. It was believed that a check needed to be maintained to ensure that the penal colony did not spread from its designated island.

When Evan Nepean was examined by the Beauchamp Select Committee he was questioned whether there was to be any person in the convict colony to act as an “Agent or Commissary” to the British Government. His response was, “They were to be visited occasionally by the Captain of the Guardship.” The degree of independence in this self-governing colony would depend on the Captain.


“The Commander of the armed Ship should have full Power over the whole of the Settlement to visit them from time to time and give any instructions to the Chief of the Convicts that he may think necessary for the better regulations of the Settlement.”

Although the trappings of a convict republic were proposed there was still a tie to their gaolers. Indeed, the captain of the British vessel stationed at the mouth of the River Gambia was to have veto over the elected convict government. Enclosure No. 1 stated:


“The African slave trader Robert Heatley offered to establish the convict settlement and take command of the guard ship on the provision that he received 700 pounds a year in compensation as an equal sum of money to that which he would lose in human trade.”


“...when they [convicts] shall be settled under such Regulations as may be prescribed for them, he [Heatley] proposes to withdraw to a more convenient Part of the River near or at Yanimerow, the Principal Port of Trade in the Gambia.”

Indeed, in Enclosure No.4, Heatley gave the proposed convict government validity beyond a mere anarchic rabble when he referred to the convict colony as an “Infant State”. Although the British Government envisaged a convict settlement that would be almost entirely self-governing, the Beauchamp Select Committee interviewed James Matra to ascertain his view on the viability of a self-governing convict colony. During his evidence, in which he proposed a settlement in New South Wales, Matra volunteered to be the “Conductor and Governor” of the proposed colony. Under examination Matra was asked:


“Will you undertake the management and government of such a settlement of convicts without any military or naval force?”

His response was a definite negative. Matra continued in evidence that he would require two hundred marines and a stationary guardship to administer five hundred convicts. As to discipline, Matra stated that he believed “martial law and prompt justice” were so essential to maintaining order that without them it would be impossible to govern.

The first British colony in Australia was, of course, the penal settlement established at Sydney Cove on 26 January 1788. The bulk of the inhabitants at the outset were either convicts or soldiers, and each of those groups was obliged to do as it was told. There was no popularly representative body established and the Governor was constituted as the sole authority. However it was not long before republican sentiment was to emerge in the new convict settlement.
REPUBLIC AUSTRALIAN HISTORY American War of Independence Australian convicts Glenn Davies
Recent articles by Glenn Davies