Face of the Republic is back

It’s been twenty years since Paul Keating announced the establishment of the Republic Advisory Committee on 28 April 1993 and appointed Malcolm Turnbull as its chair. Turnbull is back campaigning again for an Australian republic and on 10 May 2013 will speak at an ARM dinner, writes history editor Dr Glenn Davies. 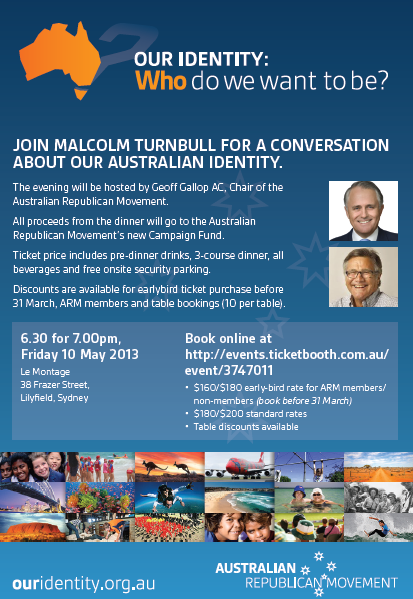 Even though Malcolm Turnbull has played no active role in the Australian Republican Movement since the 1999 republican referendum defeat, for many Australians he is still the face of the call for an Australian as Head of State. It is his name that many ordinary Australians first mention when the republican argument is brought up. On 10 May 2013, Turnbull will have star billing at an ARM fund-raising dinner at Lilyfield, Sydney, where diners will witness a ''conversation about our Australian identity'' between him and Geoff Gallop, the current chairman of ARM and a former Labor premier of Western Australia.

Throughout most of the 1990s Turnbull led and funded the Australian Republican Movement. However, after the 1999 republican referendum defeat and his resignation as ARM national chairman, Turnbull has kept a low profile on the republican issue. In 2004, he was elected as the Liberal Federal Member for Wentworth. It has been one of the curious matchings of recent federal politics that on the Federal Liberal front bench is Turnbull and one of his main opponents, the former head of Australians for Constitutional Monarchy, Tony Abbott.

One can only assume that since he was first elected, Turnbull has been required to never acknowledge publicly his republican support in order to appear a loyal member of the Abbott team. However since he delivered the 2012 ‘George Winterton Lecture’ at the University of Western Australia in September 2012 titled “Republic Virtues: Truth, Leadership and Responsibility”, Turnbull appears to have decided to make his republican position public again, and in so doing differentiate himself from Abbott in the Battle for Ideas. Predictably, the Australian’s for Constitutional Monarchy national convener David Flint immediately went on the attack breathlessly wanting to know


Why has Malcolm Turnbull decided to demonstrate to the world that the frontbench is divided on the fundamental question of a politicians' republic'?

The answer is obvious. The movement for an Australian republic is again on the rise. Malcolm Turnbull can see that the ARM’s grassroots national campaign is hitting a chord across Australia and he wants to be a part of it.

On 13 March 1993, Paul Keating won “the sweetest victory of all” when he was elected as Prime Minister of Australia with a mandate to pursue his program for an Australian republic.

In his Engagement. Australia faces the Asia-Pacific (2000) Keating described how he


...put the republic on the political agenda by proposing the constitutional change in the policy speech for the 1993 election, For a party seeking so fundamental a change, this was the only and proper thing to do. It allowed the community to consider the subject before casting its vote.

In the policy speech, after his election win he promised to set up a bipartisan committee to examine the complex constitutional issues involved and for it to report to the government.

On 28 April 1993, at the annual dinner of the Evatt Foundation, Keating announced the establishment of a nine-member Republic Advisory Committee:


...a broadly-based committee of eminent Australians, including representatives of the States, to develop a discussion paper which considers the options for a Federal Republic of Australia ... it would be the intention that as a result of this committee’s deliberations and the public discussion that would follow, the Australian people would be in a position to decide by referendum later in the decade whether Australia should become a republic by the year 2001.

The terms of reference of the Republic Advisory Committee were to to examine the constitutional and legal issues that would arise were Australia to become a republic. The Committee was asked to consider issues such as:


The nine-member bipartisan Republican Advisory Committee was appointed in May 1993 and consulted widely around Australia. The RAC was chaired by Malcolm Turnbull and included Nick Greiner and Naomi Dougal, who were prominent members of the Liberal Party, as well as constitutional experts such as Professor George Winterton and Dr John Hirst. Between May and October 1993 the RAC toured around town halls and community centres throughout Australia listening to the views of ordinary Australians.

One hundred years before the Republic Advisory Committee began stumping around the country Edmund Barton was holding meetings throughout New South Wales and with border Victorians to keep alive the idea of Federation. By the end of May 1893 there were 15 branches of the Federation League in the valley of the Murray. Quick & Garran recorded the Australian Federation League pledged,


...to advance the cause of Australian Federation by an organisation of citizens owning no class distinction or party influence, and using its best energies to assist Parliamentary action, from whatever source proceeding, calculated to further the common aim of Australian patriotism. 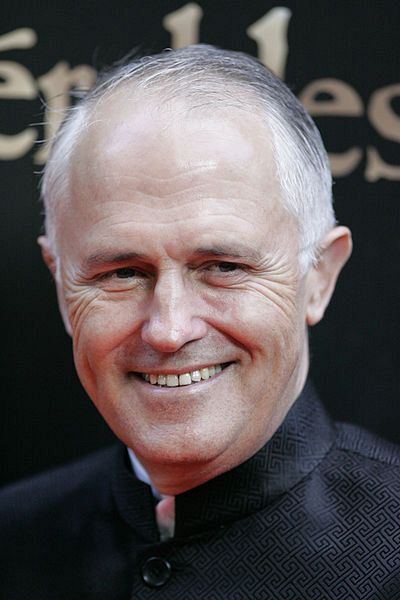 Barton’s focus was on federation of the Australian colonies and succeeded in making the federation movement appear popular. The Federal Leagues were to occupy the representative place of “the people” in the federation debates.

The ARM's 2013 strategy, is to build support for a republic from the grassroots by talking about national identity, rather than focusing on how to select the head of state. The current campaign has been touring around the country as did the Republican Advisory Committee in 1993, as well as Edmund Barton in 1892 and 1893 when he was trying to keep alive the idea of Federation in the days after the 1891 National federal Convention. Edmund Barton’s actions in keeping alive the federation movement eventually saw him elected as the first Prime Minister of Australia.

Perhaps Malcolm Turnbull’s actions in helping to keep alive the republican movement will see him become the first President of the Republic of Australia.