IA looks back over a year of climate-driven calamities and political scandals.

AS WE COME to the end of a tumultuous year characterised by catastrophic bushfires, wild storms and an international pandemic, many will be happy to forget 2020.

Certainly, many of us are still shell shocked. However, it may be timely to remember the key political events and how they have impacted our lives.

In January, many Australian families were devastated by bushfires, which swept across the nation, claiming 33 Australians, and where smoke inhalation extinguished a further 450 lives. While Prime Minister Scott Morrison’s response of flitting off to Hawaii has been the subject of much frivolity and is now almost a cliché, we need to keep asking ourselves, Is this an acceptable response from any leader?

As the year nears its end, we have now discovered that despite the pacifying noises of funding and reparations made by the Morrison Government to smooth over people’s anger, in many cases, these promises have not eventuated. 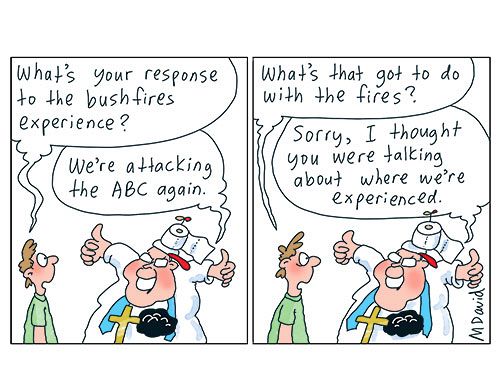 Morrison Government throws another Royal Commission on the fire

Will the findings of the Bushfire RC create much-needed change, or is the Morrison Government just "polly waffling" until the next disaster strikes?

The sports rorts saga in February epitomised the entitlement of the Morrison Government, as it was found to have pumped money into marginal seats as an election tool, indicating how far it is prepared to go for a win. While Bridget McKenzie lost her spot in the Cabinet, she did not resign from Parliament or her leadership of the Nationals in the Senate. And, while rorts in the sporting world may have been discontinued as a result, rorts in other areas are alive and well.

Just this week, this favouring of mates is evinced by (among other examples) the allocation of $10 million in bushfire recovery funding to Visy, owned by one of the world's richest men, while many affected towns still struggle for assistance.

In March, the plague arrived on a cruise ship, well-rested after sailing the seas, courtesy of the Morrison/Berejiklian governments. Neither has taken the blame and no one has been held accountable for permitting 2,800 people to disembark and go about their merry way spreading the virus across Australia.

The pandemic triggered a nonchalant (some say negligent) response from Morrison as he commanded Australians to"get out from under the doona". “Schools are safe,” said Morrison, slipping into his trademark autocratic style. “I can’t be more clear than that”.

His response missed the mark as far as the public consensus was concerned and so, the PM set up the National Cabinet to soothe the mood. This was a canny move by Morrison as it kept the Opposition’s inconvenient criticism out of public view and also ensured that should it all go wrong, it would be the fault of the premiers. As the premiers largely gave COVID suitable weight, however, Morrison was able to claim credit for managing the virus.

Thus, April was all about raising confidence in the Federal Government’s handling of the virus. A snazzy new tracing app suddenly materialised and was incessantly promoted on every medium.

The pandemic became the raison d'être for all Federal Government business but not sufficiently important for Labor state governments to implement any mitigation strategies that restricted any other business — the magical tracing app would solve everything.

Unfortunately, six million downloads later and a cost of $2.5 million to develop, plus $7 million in advertising expenditure, it only managed to trace 17 people.

Searching for a suitable distraction, NSW Liberal Premier Gladys Berejiklian became the Coalition’s pet premier – somehow later setting “the gold standard” for the COVID response – while Victorian Labor Premier Dan Andrews became the scapegoat for all that ailed Australia in May.

The Ruby Princess debacle and other states (including NSW) sub-contracting hotel quarantine notwithstanding, the Coalition’s PR machine went into overdrive, railing against Andrews at every opportunity, and COVI-19 was termed the "Victorian virus”.

Maybe it was Andrews’ cool non-pulsed responses, such as the following, that incensed them further:

“I’m not particularly worried about Mr Tehan … Ultimately … fighting amongst ourselves is not what is needed. Fighting this virus is what is most important.”

Nonetheless, the catcalls and irrational rants continued as the compliant mainstream media once again played along.

In international news, the horrific murder of George Floyd in the U.S. highlighted institutional racism and gave rise to the worldwide Black Lives Matter movement.

June brought “branch stacking” – apparently only of relevance when involving the Labor Party.

Abbott managed a Queen’s Birthday gong for his “service” to the Indigenous community. (No, not a joke.)

And Labor and the Greens finally called for a royal commission into the unconscionable Robodebt scheme as Morrison and co insisted they were “fixing the problem”.

While adamant we had to learn to live with the virus, the PM nonetheless closed Parliament indefinitely in July. The rest of Australia was expected to work remotely but not our Federal politicians, of course.

Right-wing vitriol against Dan Andrews continued, but now Queensland Premier Anastacia Palasczuk started to cop it for her handling of the coronavirus, as well. It was time to open up! cried the PM — for everyone except the public service.

By August, particularly noisy business leaders and self-centred consumers joined the right-wing "Dictator Dan" crusade in Victoria, refusing to follow COVID restrictions. They were egged on by many in the media, who had by now started a competition in idiotic questioning of the Premier. And anyone who dared criticise this imbalance in reporting was labelled part of the “Feral Twitterati”.

August was also the month the extent of the Government’s negligence of the aged care sector became apparent. The sector remains a disgraceful testament to the Morrison Government's ineptitude.

September brought news of Liberal Party branch stacking. But nothing happened about it, obviously. (See June above.)

This was the month Energy Minister Angus Taylor came up with the “ground-breaking” fossil fuel-led "roadmap" to nowhere – a regurgitation of past plans to continue worshipping at the altar of coal.

Infrastructure Minister Alan Tudge was also found to have acted unlawfully by a Federal Court Judge for keeping an Afghan man languishing in immigration detention, despite being granted a temporary protection visa, because Tudge “did not like the tribunal’s decision”.

There were no consequences for Tudge.

And in this month, we discovered Communications Minister Paul Fletcher liked to tip billionaire friends of the Coalition – to the tune of $27 million – in the Western Sydney Airport land deal fiasco.

In a welcome move in October, former Prime Minister Kevin Rudd joined a cacophony of voices that oppose the Murdoch-led oligarchy, as frequently highlighted in IA.

It was revealed in October that Gladys’ boyfriend, Daryl Maguire was involved in corrupt dealings while they were romantically involved. And while she was Premier. And even though she had sacked him pending investigation, she denied any knowledge. Gladys pleaded innocence due to having a female brain, incapable of logical thought whilst consumed with love for a man.

Palaszczuk's Labor Government made history by easily winning a third term, despite a long and sustained negative campaign against her, similar in severity to the one against Andrews.

November saw a $1.2 billion settlement for victims of the Federal Government’s Robodebt scam.

Tudge and Attorney-General Christian Porter revived the “bonk ban" conversation as the subjects of sexual harassment claims, for which Tudge apologised but Porter continues to fight on.

The United States went to the polls and most of the sane world breathed a collective sigh of relief that Trump had finally been defeated, though it remains to be seen if he will actually leave the White House voluntarily.

IA reported that recommendations from the Bushfire Royal Commission were being ignored by the Morrison Government in December.

Morrison outdid himself in avoidance techniques by refusing to answer why Tony Abbott and Alexander Downer got to travel overseas, on the public purse, while stranded Australians were unable to return home. But former PM Rudd did so too! accused the PM – only Rudd hadn't – which means Morrison misled the Parliament in the process. And got away with it.

The PM has also managed to incur China's wrath once again, this time affecting his beloved coal industry.

Finally (so far) this month, Morrison was conspicuously left out of international climate talks — a fitting response by the international community for a climate change denying, coal-loving leader.

Many in the mainstream media will have us believe that Australia under the Morrison Government has ended the year on a high note. For the rest of us, apart from Trump's loss and the premiers' vigilance on COVID restrictions – for which the Federal Government can hardly take credit – there wasn't much to be joyous about in 2020.

We will party on New Year's Eve like it's 1999 and welcome 2021 with fervour. The cynical among us may also look forward to 2022, and the chance for a new government.

The United Nations has defended its decision to leave Scott Morrison off the speaking list for this weekend’s Climate Ambition Summit. Why you ask? Well, it’s absolutely definitely not got anything to do with the absence of any climate ambition. Probably.#TheProjectTV pic.twitter.com/KMbDJ9nmxY

This editorial was originally published as part of the Independent Australia weekly newsletter. These editorials are usually only available to subscribers and may be read online in the IA& members-only area.