Alan Tudge, Richard Colbeck and Paul Fletcher are the latest Morrison Cabinet ministers to be mired in scandal, but no one is responsible for anything in this Coalition Government, writes managing editor Michelle Pini.

BACK in November last year, we pondered whether Coalition MP Angus Taylor – then the subject of a criminal investigation – would be afforded the luxury of continuing as a cabinet minister if he were a Federal Labor cabinet minister.

ALL IN THE FAMILY

Now, almost a year since, it is abundantly obvious that nothing has changed. If anything, the Morrison Government’s standards continue to dive headfirst into an ever-increasing well of irresponsibility, more reminiscent of mafia families than democratically elected governments.

Meanwhile, Labor parliamentarians, such as those in Victoria’s Andrews Government, are scrutinised to the point of harassment. This, too, has not changed.

Rachel "given those findings ..."

We are certainly not advocating for an easy ride for Labor politicians such as that enjoyed by the current Federal Government.

However, if just a small percentage of the vigour expended by the media in the pursuit of the Victorian Premier was directed to the Prime Minister, perhaps someone would be held responsible for Federal Government misdeeds, occasionally, at least.

In a staggering development this week, Immigration Minister Alan Tudge – best known for his involvement in the criminal Robodebt scheme – has once again, according to a Federal Court Judge, “acted unlawfully”.

In handing down his finding, Justice Geoffrey Flick said Mr Tudge acted as if he was "above the law", and that he had "intentionally and without lawful authority been responsible for depriving a person of his liberty". This was in reference to Tudge’s insistence on keeping an Afghan man languishing in immigration detention for five days, despite being granted a temporary protection visa, because he “did not like the tribunal’s decision”.

“In the absence of explanation, the Minister has engaged in conduct which can only be described as criminal."

But you would be wrong. 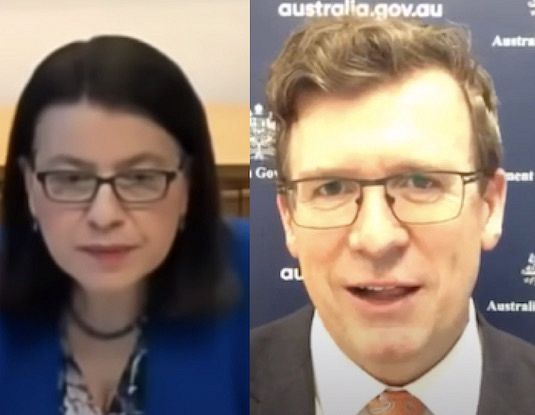 We need the mainstream media to hold the Morrison Federal Government to the same standards they seem able to apply to the Andrews State Government.

Not only has Tudge not faced the resignation music, or suitable penance of any kind, he has merrily continued on — his actions even getting the seal of approval of Australia's chief law officer, the Attorney-General.

"…Obviously, some robust statements were made with respect to the court, but the Minister clearly rejects those conclusions."

Oh well, obviously! Seeing Tudge rejects the judgement — unlike any other person accused of criminal conduct, ever. And seeing it’s not the first time, we can just ignore it all, as the media does.

Astoundingly, the fact that Tudge engaged in criminal behaviour has all but disappeared from the narrow view that passes as our Fourth Estate.

In the never-ending revolving door of government misconduct, hardly an eyebrow is raised, even a Federal Court judgement is apparently now open to debate. And apart from a perfunctory article or two, no pressing curiosity has materialised from the usual media suspects on this particular instance of criminal conduct — certainly not the frenzy surrounding the Andrews Government.

Adding to the list of tolerated dead wood within the Morrison Cabinet, there is now little doubt that Aged Care Minister Richard Colbeck is incompetent.

Last month, the Aged Care Minister was censured for his ignorance regarding the number of nursing home coronavirus deaths during a parliamentary inquiry.

This month, Colbeck was again censured by the Senate for failing to take responsibility for COVID-19 in the aged care sector.

So far, there have been no less than 663 coronavirus deaths linked to aged care institutions.

“… Every week 100 older Australians were being raped, assaulted and killed in aged care facilities.”

It's clear that the Morrison Government has monumentally failed our most vulnerable senior citizens.

Will Colbeck resign? Of course not. He is part of the “family”.

Government Senate Leader Mathias Cormann instead made this predictable statement:

"We stand with our colleague, Senator Colbeck, who is doing a very good job, in a very challenging area, in a very difficult context.”

Today would be an excellent day for Aged Care Minister Richard Colbeck to resign. He's been disastrous in the his role from day dot, isn't across the Royal Commission, and has utterly failed in his duties to prepare aged care facilities for COVID outbreaks. #auspol #agedcarerc https://t.co/aNUDbS36qS

When Technology Minister Paul Fletcher was Urban Infrastructure Minister, his department just happened to purchase a 12-hectare plot of land at ten times its actual value of $3 million, prompting the Auditor-General to pronounce the deal "unethical".

The plot, intended for an extension to Western Sydney Airport, was purchased from Leppington Pastoral Company, owned by billionaire brothers Ron and Tony Perich — who also just happen to be major Coalition donors.

Only one valuation was provided at the time, by a company suggested by the vendor, naturally. Further, the airport extension is not due to be built for another three decades.

But what’s an extra $27 million for wealthy mates to this Government?

Besides, as Fletcher said, sure, he was the Minister in charge but it’s hardly his fault:

"I did not have that information in front of me, and I was not the decision-maker… Would it have certainly raised further questions? I'm sure it would have done."

We’re fairly sure it wouldn’t have done.

After all, why bother with questions or due diligence in regard to taxpayer money when no one is ever responsible for anything in this Morrison Government?

Occasionally, a valiant effort is made to get to the truth. The ABC attempted to interview both Richard Colbeck and Health Minister Greg Hunt over the aged care disgrace 14 times, but they were simply not available for comment. Probably too many more pressing family commitments.

So even when the Fourth Estate does push for answers, this Morrison Government takes the “hands in the air” approach more commonly associated with footballers or, just goes into hiding until it all blows over — which it usually does.

It is abundantly clear that the Federal Government is no longer interested in the rule of law, choosing to pursue its own self-serving interests and those of its wealthy donors with callous disregard.

It is equally obvious that the media mob are, for the most part, willing to turn a blind eye.

Like the sliding autocracies of our English speaking counterparts in Johnson's Britain and Trump's broken United States, could it be that we are starting to witness the end times for democracy?