Just when you thought it wasn’t possible for the Morrison Government to be more arrogantly out of touch or openly hypocritical, along comes Josh Frydenberg.

Self-proclaimed “best” at managing the economy and previously apoplectic about the Labor’s Government’s "debt and deficit disaster", the Coalition Government, has, in its seven years in power, managed to treble Australia’s debt and deficit.

Not about to let a silly old pandemic and an unrivalled debt and deficit disaster of his own making get him down, however, Treasurer Josh Frydenberg has hardly mentioned this "detail", taking instead a nostalgic stroll to a simpler, more obviously neoliberal time.

In a valiant move, which has, hopefully, reminded us all why neoliberalism is an abysmal and diabolical death cult that only delivers gains for the rich, the Treasurer recalled a time when the economics of self-interest was de rigueur.

It was during this heady time for his heroes, those much-loved dividers and conquerors, Thatcher and Reagan – when privatisation and union busting ruled, and the world had not yet noticed that the "trickle-down" wasn’t trickling – that Josh was “inspired”, apparently.

Ahh, former UK Prime Minister Margaret Thatcher, nicknamed the Iron Lady, not only for her heartless policies that punished all but the super-wealthy but for declaring that there is“no such thing as society” and everyone should just fend for themselves, inspired our Josh.

And another inspiration for Josh is former U.S. President Ronald Reagan, the symbol for right-wing economic stealth, who likewise surged ahead with massive tax cuts for big business and privatisation of public services, plunging all but the mega-rich into abject poverty.

Such excellent precursors for “herd immunity”.

"Thatcher and Reagan are figures of hate for the Left because they were so successful.”

.@JoshFrydenberg on taking inspiration from Thatcher and Reagan:

"Thatcher and Reagan are figures of hate for the left because they were so successful. One got two terms, which was the maximum that you can get in the US. Margaret Thatcher got 11.5 years." #Insiders #auspol pic.twitter.com/BNBTRd9Cid

This should tell us all we need to know about the motivation behind the economic policies of the Morrison Government.

Of course, there have been oh-so-many signs before now. The “lifters and leaners”, the “unfunded empathy”, the worshipping of coal and the ongoing obsession with tax cuts and surpluses, to name a few.

We may do well to reminisce, instead, about that culmination of the neoliberal policies pioneered by Frydenberg’s heroes: the Global Financial Crisis (GFC). During that particular international disaster, we had a Labor Government, which was hounded mercilessly by the Coalition – including our Josh – for its debt and deficit.

No matter that Australia, led by Labor, managed to sail through the GFC relatively unscathed and was heralded internationally as the world’s best economy. Labor’s debt and deficit "disaster" was at “levels Australia has never seen before”, according to Frydenberg. "And so say all of us", went the mainstream media playbook.

Now that the Coalition has trebled Labor’s debt and deficit, though, that’s okay. After all, how are all those corporations going to get their tax cuts otherwise?

The truth is that debt and deficit (as has frequently been proven) was obviously never the insurmountable problem that the Coalition and the mainstream media made it out to be. Certainly, Labor managed the previous debt and deficit quite nicely, according to the rest of the world — the majority of which experienced debilitating recession, instead.

Since the Morrison Government and the Treasurer entrusted with our money, however, have ignored their own debt and deficit disaster, as well as spiralling unemployment, this was only ever a conservative talking point with which to bang Labor over the head. The Coalition, after taking debt to unforeseen heights is now using the coronavirus as an excuse to ignore any and all manner of problems, and to forge ahead with their prior agenda: making the rich even richer.

On debt and deficit, the Liberal Party are without shame in their decade-long campaign of bald-faced lies to delegitimise the Labor Government. And all made possible by Murdoch’s lies. #MorrisonsGiantDebtCon pic.twitter.com/r5tK8NFSWE

This is the only explanation for the Morrison Government’s recent actions.

Why else, if debt and deficit no longer matter to this Government, would it be scaling down support for small business, workers and the unemployed, and making access to relief measures harder to access?

COVID-19 is so debilitating a problem, we’re told, that Frydenberg has to delay the delivery of the 2020 Budget and the Intergenerational Report. Public services have ground to a halt because of this, too. Why, then, are senators Marise Payne and Linda Reynolds flying off to the States, and the Prime Minister jet-setting about on the campaign trail in Queensland?

Why are Reynolds and Payne, as well as Nicole Kidman and Dannii Minogue, exempted from quarantine regulations?

After cutting childcare supplements, increasing university fees and generally turning a blind eye to escalating joblessness, Frydenberg’s answer for the economic downturn has been to suggest we all have more babies. Never mind that we have no jobs with which to feed our babies and can’t afford to have them minded — even if we do find work.

If the coronavirus is such a big problem that Parliament must be cancelled, why is the Government urging everyone else to go to work?

If debt and deficit are an issue no more, why is the Government reintroducing reporting requirements for the unemployed?

If the coronavirus means travel is restricted and businesses remain closed, why are the unemployed expected to look for non-existent jobs, despite being unable to travel, penalised further for being unemployed by having their income halved and their concerns met with recorded messages, “due to COVID-19”, from public service organisations?

Finally, why is Frydenberg reanimating economic ideologies – dead and buried along with Thatcher and Reagan – to shovel money to the rich and bury the poor? 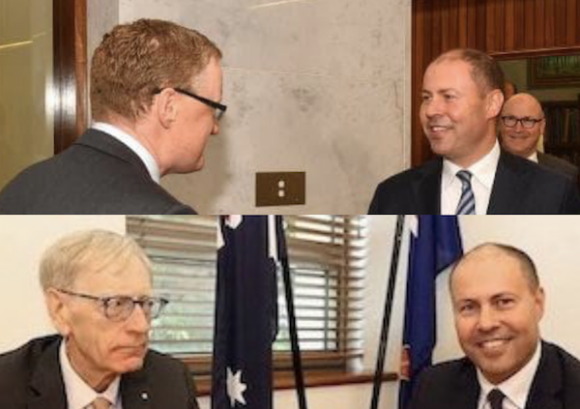 In a daring new plan for Australia’s economy, Treasurer Josh Frydenberg has embarked on an ingenious approach: begging.