Concerned about lack of government accountability as Parliament shuts down — again? Well, that’s because of COVID-19. And also, Daniel Andrews, naturally.

Feeling anxious about how you’ll make ends meet once JobSeeker is slashed? It can’t be helped because … COVID-19!

Worried about Australia’s economy? Well, we’re in a pandemic!

Starting to feel as though you’re a character in Orwell’s 1984 every time you turn on the news?

Australians may be forgiven for believing that the litany of problems not being addressed by the Coalition Government is due to the pandemic. After all, according to most media reports, Morrison is doing a fantastic job, Dan Andrews is to blame for Victoria’s coronavirus cases and, what was the Ruby Princess again?

The dominant media narrative continues to praise the Prime Minister. It reinforces the misconception that he singlehandedly “saved” Australia from the worst of the pandemic. This is despite, as we have discussed before, the facts proving the opposite.

The sad truth is that the majority of "news reports" are now simply talking points repeated verbatim from Morison Government media statements.

In the rare instances when the inconsistencies of Morrison’s claims are questioned by the occasional brazen journo, it’s usually a half-hearted effort at best, met with denial, contempt or outright refusal of reply.

On Tuesday (21 July) Leigh Sales interviewed Morrison on ABC’s 7.30 and the PM managed to either ignore or apply his usual marketing-speak to most questions. To her credit, Sales queried a few contentious issues. She hardly went for the jugular. Nonetheless, Sales was still labelled “disgusting,” a “very cranky interviewer” and a “bully”. Former Victorian Liberal Premier Jeff Kennett went as far as to say she was disrespectful and had 'bad manners'.

Of course. Because why should a journalist be permitted to do their job and ask questions — of the Prime Minister, no less?! Didn’t Sales get the media statement?

Mostly, however, Morrison and his ministers – who are mainly in hiding – don’t even need to deny anything. This is because the mainstream media cartel presents nonsense as fact.

The item begins with, "The situation in Melbourne has forced the closure of Federal Parliament".

“It’s not just to assist the ACT community,” says Jennifer Bechwati, before swiftly focusing attention onto Victoria as the plague state:

“If you think about it, you’ve got dozens of MPs and their staff from Victoria, a virus hotspot, coming here, to this building.”

Bechwati moves on to spell out how the virus spreads – for those of us who might be too dumb to understand – that “it takes just one infected person”, before concluding with:

“So, that’s the reason why the decision was made.”

Who can argue with such dazzling logic?

Finance Minister Mathias Cormann – who had already announced his resignation from politics, if not this particular conversation – was then trotted out to give us his unequivocal justification for the closure, which was that "affected states" couldn’t be excluded and so, well, the end.

Opposition Leader Anthony Albanese was allowed a 30-second post-script opportunity to say something about the contradiction between the PM calling upon states and businesses to open up and “what is happening here with the shutting down of our national Parliament”.

But Bechwati was a step ahead, by golly, informing “those wondering” and clearly intellectually challenged viewers:

“…a virtual parliament can’t happen here because the House Speaker and Senate President are from Victoria.”

And she wasn’t done yet — there was a talking point on that media statement Bechwati must have forgotten. Treasurer Josh Frydenberg – who also hails from Victoria – had been granted a special"travel exemption" to travel to Canberra, to present the mini-budget because this (as opposed to a functioning democracy) was “critical”. But, Bechwati concluded, looking satisfied, “he’ll need to adhere to strict social distancing measures”.

The only thing missing from this 7News “report” was a banner calling for contributions to the Liberal Party.

Now, perhaps we need a longer, special-ed tutorial from Bechwati, but the following questions did spring to mind:

Morrison is clearly not satisfied with running away for recreational purposes and leaving the country to deal with any old major crisis, such as when most of the country was burning down or, now, during this pandemic.

Only the shutting down of Parliament will ensure the avoidance of further pesky questions.

This Morrison Government is operating without checks and balances. It is using the pandemic to justify any and all self-serving legislation, without scrutiny. It is hiding behind a National Cabinet that does not include the Opposition. It has effectively employed the mainstream media as its publicity machine. And now, it has shut down Parliament and what's left of our democracy. 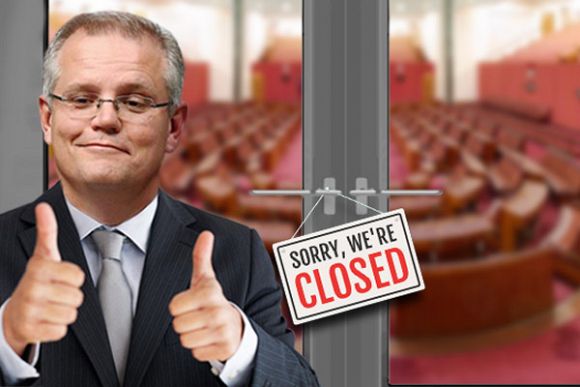