A new global economic leader has emerged this year, while Australia has fallen even further from the top position it once held. IA’s econometrics specialist Alan Austin reveals the winners and losers for 2018.

ICELAND IS FINALLY benefiting from its draconian responses to the 2007 global financial crash of allowing mass bankruptcies and jailing corrupt executives. It has just generated the world’s best-performed economy.

Iceland skiied ahead of the pack this year with low unemployment – just 1.7% – exceptional economic growth, high economic freedom and the world’s highest median wealth at US$203,847 per adult. (Median wealth reflects fair distribution of the prosperity as well the quantum.)

Most impressively, Iceland has reduced its debt dramatically from 94.7% of gross domestic product (GDP) in 2011 to 42.3% last year. It is on track to have this below 24% by year end.

Singapore came a close second this year, after ranking first last year and second the year before. Hong Kong remained in third place for the second year in a row. These three led the world by a fair margin.

These are national income per person, GDP growth, median wealth per adult, jobs, inflation, tax levels, government debt and economic freedom. This simple formula can easily be replicated by anyone who has the internet, spreadsheet software and is excited by econometrics:

The raw data comes from tables published by the World Bank, Credit Suisse, Heritage Foundation, the CIA Factbook, the International Monetary Fund (IMF) and tradingeconomics.com. This is the world’s only multi-variable index of overall economic performance. 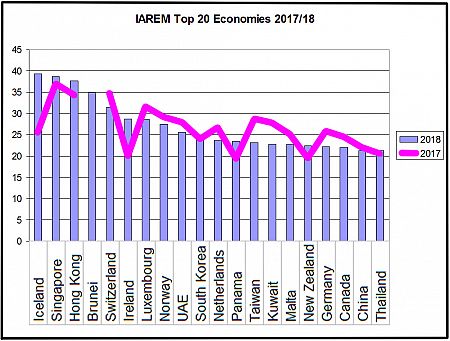 In the top ten this year are Iceland, Brunei, Ireland and South Korea. Out are Taiwan, Kuwait, Japan and the Netherlands.

The next ten are:

The third ten are:

Arriving in the top 30 this year for the first time, or after an absence, are Brunei, India, Bahrain and Lithuania. Out are Japan, Belgium, Denmark and Finland.

Top 30 economies in the world ranked in order by IAREM score: 2018 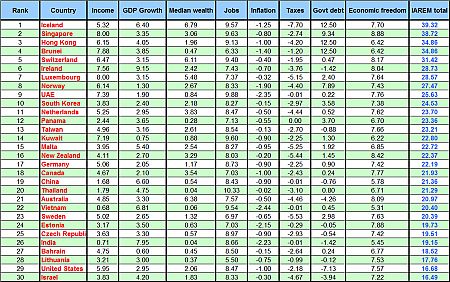 Economies which rose most impressively through the ranks this year, besides Iceland, include New Zealand, Ireland, Panama, Vietnam and India.

New Zealand advanced on most variables with the jobless down to 4.5%, economic freedom the highest in the Western world and government debt steadily reducing.

Iceland has emerged only recently as a successful economy after centuries of relative poverty. Its economy modernised after World War II and boomed in the 1990s and early 2000s as local banks, newly privatised, offered international financial services at absurd rates and rapidly expanded their assets.

The crash of late 2007 then impacted Iceland disastrously. The government could not rescue the banks so let them collapse. This led to a period of extreme hardship for most Íslendingars, with widespread job losses, a seriously devalued currency, rampant inflation, large-scale emigration and tough decisions to be taken by subsequent left-right coalition governments.

Economies to have fallen furthest on the IAREM this year include Israel, the USA, the United Kingdom, Belgium and Japan. None of these managed to take advantage of the continuing boom in global trade, investment, jobs and corporate profits.

Australia’s debt continues to surge – alone in the OECD with Mexico and the USA – and median wealth fell from US$197,532 per adult last year to $191,453. Inflation and economic freedom both slipped marginally.

Reasons for Australia’s demise as a leading economy have been well-canvassed in the alternative media. The pro-Coalition mainstream media, however, has been silent on the inexorable fall down virtually all global measures.

This is the sixth year Independent Australia has published the IAREM, and 2018 is the twelfth year for which rankings have now been compiled. The top economies over that period have been:

Just one final fun fact from Iceland. The prime minister’s office is an old stone building in Reykjavík known as Stjórnarráðshúsið. This was originally built in the 1700s as a prison. Perhaps this concentrates the mind of legislators today.

2. Government debt is now drawn from the World Bank’s data ‘Net lending/net borrowing (% of GDP)’. Discontinuation of the previous database necessitated this change.

4. The author and publisher welcome interaction. Readers are urged to join the chat below and at the IAREM Facebook page. Further data will be readily supplied.

Once a sleepy backwater, #Iceland embraced the credit boom with gusto. Then came the crunch. Ten years on, the economy is back on its feet and its prospects look good https://t.co/TY3yf8EG1S pic.twitter.com/F32bKUo7dk

In 1969 Australia was still one of the world's top 10 world economies.
Then we started privatising everything, so now most of the wealth generated in Australia goes to foreign owned companies and we are broke and going further into debt.
Our own politicians screwed us.