AUSTRALIA IS A CONSPICUOUS LOSER in the latest list of the world’s best-performed economies. In 2014, Australia fell from the coveted top spot to third, behind Singapore and the United Arab Emirates.

Several other countries tumbled terribly too. Some, such as the United Kingdom, on the eve of a close-fought national election, improved impressively.

Australia’s decline is not just because Singapore surged ahead. Australia’s overall score of 29.25 was below the top 2013 score of 30.23. This reflects declining economic freedom and slower growth in gross domestic product (GDP) during the first year of the incoming Coalition Government.

The IAREM score – the Independent Australia ranking on economic management – is derived from eight readily accessible data sets which reflect the economic outcomes most prized by citizens, governments, businesses and workers.

It is a linear equation, using basic arithmetic and algebra. Hence it is readily replicable by readers with internet access and spreadsheet software.

The eight variables are income per person, growth rate of GDP, median wealth, jobs, inflation, taxation, net government debt and economic freedom. Most variables are numbers between -10 and +13.

Details of data sources and calculations used to derive the eight variables are published here.

The IAREM scores reveal progress or regress for each economy year on year. And they enable comparisons of economic performance between all countries in any given year.

This is the only published ranking of economies using all critical measures of economic performance. It supplements the various credit ratings, Cato’s and Heritage’s economic freedom rankings, the world’s fastest growing economies chart, most liveable city tables, the UN’s human development index, the global competitiveness report, the international corruption index and the cheerful happiness index.

Panama is the surprise here, with a stunning rise attributable to extraordinary GDP growth, high employment and improving economic freedom. 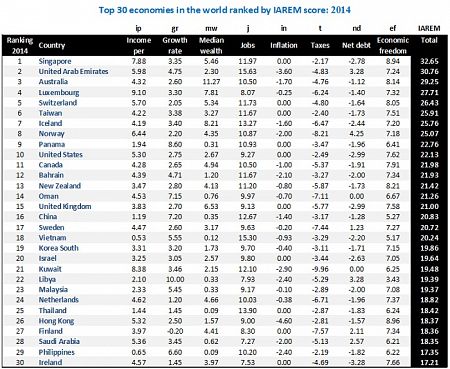 Rounding out the top forty

The scores reveal that 2014 was a difficult year for the majority of the world’s economies, but particularly for the larger nations.

Of the 19 largest economies comprising the G20 (along with the European Union), only eight improved in 2014. They were the USA, the UK, South Korea, Saudi Arabia, Indonesia, India, Italy (just barely) and South Africa.

Several major economies fared disastrously. France fell in the rankings from 29th in 2013 to 39th. Germany tumbled from 22nd down to 34th. Japan fared even worse, plummeting from 13th to 36th, with GDP growth falling, inflation increasing and taxation rising.

The strongest 2014 improvements were all in South-East Asia. Thailand rose from 47th place to 25th. The Philippines jumped from 48th to 29th. Malaysia rose from 41st to 23rd. And Vietnam broke into the top 20, up from 38th to a remarkable 18th. 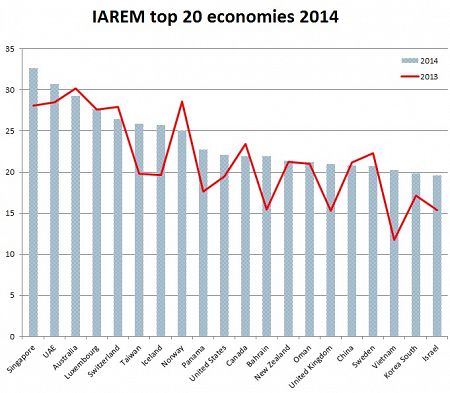 It is now possible to examine the components of the economies which improved and those which deteriorated. A cursory analysis suggests that global economic growth improved in 2014 and inflation eased. In contrast, income per person, median wealth, employment, government debt and economic freedom all worsened, overall.

It is also feasible to see if correlations are observed between particular government policies and the rise or fall of economies where they were applied.

It was apparent through the global financial crisis, for example, that economies which implemented the fastest and largest stimulus spending responses were those with the best-performed economies.

It will now be possible to track policies such as privatisation of public assets, investment in infrastructure, quantitative easing, taxation levels, minimum wages and overall wage levels.

And for those fascinated by the relative performance of Socialist, Labor, Liberal, Libertarian, Conservative and other political parties, the rises and falls following changes of government – as in France, the UK, Australia, Greece and elsewhere – can readily be measured.

1. All major developed and emerging economies were evaluated, 68 in all. Excluded were poor developing countries, the tiny island states and kingdoms where valid comparisons are not feasible: Liechtenstein, Macao, Monaco, San Marino, Vatican City and Qatar.

2. The only change to the methodology from that applied in 2007 and 2013 is that the raw data for taxation was drawn from the CIA Factbook rather than the World Bank. The CIA has a complete country list with more current data. The divisor was changed to 7 to maintain comparability across time.

3. See also footnotes in the first article in this series regarding methodology.

4. The author welcomes interaction. Readers are invited to contribute to the discussion below and at the IAREM Facebook page. Further data will be readily supplied.

It's clear the Coalition has been scaremongering: Australia tops the IAREM: World’s best economy http://t.co/PruuBMu4UE @IndependentAus