Many believe that by about 2011, after the GFC devastated much of the developed world, Australia had the world’s best performed economy.

Commentators within Australia’s media and the Opposition political parties, however, continued to denigrate it with terms such as 'the cupboard is bare' and 'debt spiralling out of control' and 'a budget emergency'.

Which is true? How can we tell? Does it matter?

These are relevant questions for those who wish to compare and contrast such economic philosophies as government intervention verses unfettered market forces, or high wages verses low wages, or high taxes versus low taxes. Or for those who just want to know if evidence shows one party is better at economic management.

It is perhaps remarkable that there is no index which measures economic wellbeing overall.

But no ranking for economic management. Until now.

The challenge is to find internationally accepted measures which are reliable, comparable across nations and through time, which can be combined in such a way as to come up with a ranking that is fair and accurate.

Fortunately, there are eight readily accessible sets of data which reflect the economic outcomes most prized by citizens, governments, businesses and workers.

So here is the IAREM score: the Independent Australia ranking on economic management.

It is a linear equation, requiring fairly simple arithmetic with just a smidgeon of algebra.

1. Income: How much money people earn

After ticking the box for the latest year, 2012, click ‘download’ at top right to get the spreadsheet.

2. Growth: The rate the economy is expanding

Growth rate – gr in the formula – is found at tradingeconomics.com under GDP annual growth rate.

Take the average of the last two years to minimise statistical blips — advisable because this measure is somewhat volatile. This yields a variable for each country between -6 and +10.

3. Wealth: What people own

Median wealth – mw – measures the mid-point of the distribution of riches in the adult population. Statisticians consider this a sound indicator as it is not unduly affected by exceptionally high or low values. It serves here to reflect not just wealth, but also equitable distribution of wealth.

Raw figures range from below 1,000 to just above 200,000. So dividing by 20,000 derives variables for each country between zero and 11. (Just move the decimal point four places to the left then divide by 2.)

Australia leads the world on median wealth, followed by Luxembourg, Belgium and France.

Data on this and the next two variables are all found at the World Bank database, and can be downloaded easily together.

The critical measure of jobs provided – j in this formula – is found under Employment to population ratio, 15+, total.

This requires a slightly complex calculation, because most of the raw data are bunched between 50 and 70. Apply the raw score minus 30, then divide by 3. This yields a number between +3 and +13 for most nations and heightens the otherwise marginal differences between high and low employment economies. This reflects its critical importance as a measure of sound management. 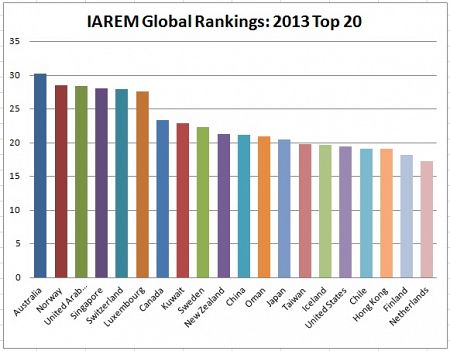 Negative numbers – Japan and Switzerland – are entered as zero to avoid awarding ‘bonus points’ for the worrisome incidence of deflation. (Supplementary data, as required, from tradingeconomics.)

Figures for Tax revenue (% of GDP) – t – are also located at the World Bank database.

These are percentages between 10 and 50 for the majority. To derive a manageable variable, divide by 5. Mostly low numbers, this variable will not influence the outcome dramatically. This is intentional as high taxation is arguably not always undesirable.

Nevertheless, this is entered as a negative to reflect the general view that lower taxes are preferable.

(There are some gaps in this chart and the data for Kuwait at time of writing is incorrect. So supplementary data is taken from the CIA and the IMF.)

Net debt to GDP – nd – is found in the world economic outlook database published by the International Monetary Fund (IMF). Follow the prompts to General government net debt, percentage of GDP, for 2013.

These numbers range widely so, again, a formula achieves manageable numbers. Divide the actual number by 10, then, ignoring the minus sign, take the square root of this number. That will yield our nd, which we add in the formula if there is money in the bank, or subtract if there is net money owing.

These are low numbers between -5 and +5, reflecting the reality that high net debt is not necessarily disadvantageous. (Where the IMF has gaps, these can be filled via the CIA Factbook or elsewhere.)

Scores are between 60 and 90. So dividing by 10 achieves a variable – ef – spread between 4 and 9. The higher the better, so these are added in our formula.

This is a strategic measure because it reflects aspects of economic management not otherwise accounted for. These include freedom of trade, freedom from corruption, government spending and labour market flexibility. Details here.

Now, insert these eight variables for all nations, in the formula:

This will yield a score between zero and +31 for most major economies thus enabling ranking in order of economic outcomes overall.

Of course, these are not the only variables we could have chosen. We could have added, for example, bonus points for A or AA or AAA credit ratings. There are others. Refer note 2, below. But these eight do enable tables to be compiled ranking all nations today and also at any time in the recent past. 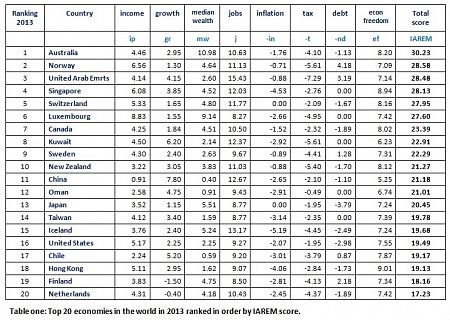 The surprise here is that traditional powerhouses Germany, Japan, the USA and the UK are absent. They scored well on wealth and income, but poorly on growth, employment and debt.

The next ten were:

Still no sign of Germany, Denmark, France or the UK. And the surprise appearance of Chile almost matching the US.

Making the top forty were Denmark, Ireland, Lithuania, Estonia, Malta, Gabon, Mexico, Vietnam, Czech Republic and Brazil.
If there are impressively high rankings of several developing economies, equally surprising is the failure of some once-great nations to make the top 40 — including Spain, Italy, Portugal, Hungary and Greece.

Comparisons with earlier periods can now be made. A chart for 1996 will show where Australia ranked when Peter Costello took the abacus from Paul Keating. A 2007 chart will show the ranking when Costello handed it to Wayne Swan — to be revealed next week.

We can then see how the rankings shift in years to come.

Will this be the Asian century, as widely predicted?

And in Europe? Currently the United Kingdom ranks 27th in the world and France 29th, both having suffered through the GFC. In 2011, the UK changed to a Conservative government after many years of Labour. Soon after, France did the opposite, changing to a Socialist government after years of conservative UMP rule.

Which will recover faster – if either – and zoom up the table? The IAREM score should give an indication.

Will last year’s change of government in Australia see a continuing surge, or a slump?

And will patterns in the rises and falls of national economies become evident? Will low-wage nations, for example, perform better than high-wage economies? Or vice versa?

If – as this series of essays attempts to show – Australia was one of just a few nations which applied particular strategies when the GFC hit which clearly worked, then that is useful for both theoretical economists and federal treasury departments to know. 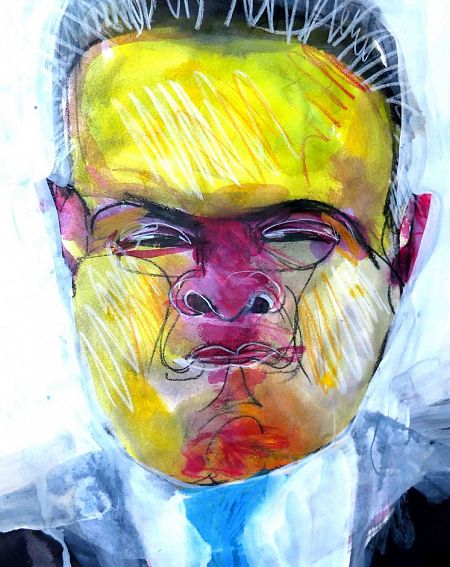 1. All developed and emerging economies were evaluated, excluding only poor developing countries and kingdoms where valid comparisons are not feasible: Liechtenstein, Macao, Monaco, San Marino, Vatican City, Qatar and the small island states.

2. Many other economic measures were considered for this formula. Arguments are certainly possible – and indeed welcome – on why some of the eight were weighted as they were, or even included at all.

The challenge was to find relevant measures which cover all nations, with historic time series, released at least annually and in a timely manner.

The CIA factbook ranks 233 countries on 25 economic measures – but does not offer historic data. The Macquarie global infrastructure index covers only 48 countries, excluding 13 in the IAREM top 30.

3. When replicating these calculations, minor discrepancies will sometimes be encountered. This is because the World Bank, IMF and other databases are updated routinely. So figures change marginally from time to time. These should not impact the rankings materially.

4. Where 2013 figures were not yet provided, the latest available were used, which it is assumed will not affect rankings significantly.

5. The only figure for which no data is available is China’s net government debt. Not even China knows this, it seems. After checking exhaustively – including here, here, here and here – the best estimate is 11% of GDP.

6. The author welcomes interaction. Readers are urged to contribute to the discussion below. Further data will be readily supplied.

The world’s best economy — Part two: Winners and losers through the GFC

This will show dramatic booms and busts, and identify both the most and the least successful economies.

What were the specific policies which rocketed some economies to the top? And what strategies failed dismally? 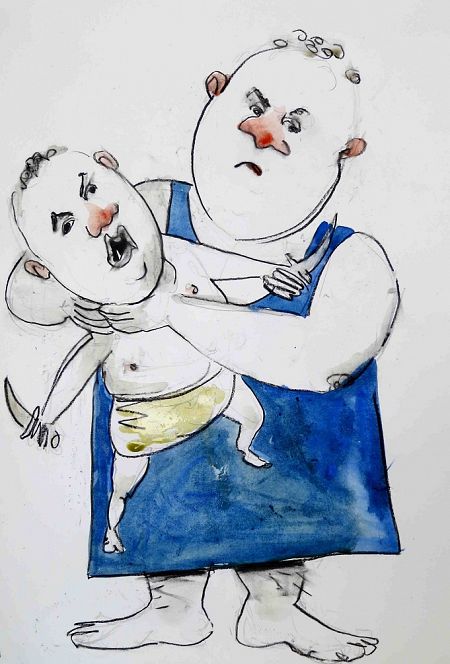