From world’s best economy in 2013, Australia fell to third last year in the IAREM global rankings. And now down to ninth. IA’s econometrics specialist Alan Austin reveals the winners and losers for 2015.

THE SURF'S definitely up. But Australia just can’t catch a wave.

In 2014, Australia fell from world’s best-performed economy on the IAREM ranking to third, behind Singapore and the United Arab Emirates. Australia had held top spot from 2009 to 2013, after managing the global financial crisis (GFC) better than most.

Australia’s IAREM score fell this year from 29.25 to 26.73. There was a marginal lift in income but declines in gross domestic product (GDP) growth and median wealth and a rise in government debt.

Most countries achieved higher IAREM scores in 2015, confirming that recovery from the GFC is continuing worldwide. Of last year’s top 30 economies, 17 had significantly higher scores this year. Seven were lower and six about the same.

Norway advanced from ranking eighth last year to an impressive third with higher income and median wealth and much more money in the coffers — or negative debt.

Clearly, the most spectacular move was New Zealand’s advance from 13th to fifth on the strength of greater median wealth, lower inflation and lower debt. Malcolm Turnbull’s plaudits for his Kiwi counterpart are well-founded.

South American economies enjoying la fiesta económica include Paraguay, Peru, Guatemala, and Bolivia. Chile, Argentina and Colombia suffered, however. So there is no obvious regional boom.

The Independent Australia ranking on economic management (IAREM) is a simple linear equation, using basic arithmetic and algebra. It is easily verifiable by readers with internet access and spreadsheet software:

The data comes from tables published annually showing the progress citizens, governments, businesses and workers most want to see. Variables are normally numbers between –5 and +13, resulting in a score between zero and 30 for the majority of countries.

IAREM scores enable comparisons of every economy, year on year and between all countries in any given year. This is the only published ranking of economies using all eight critical measures of performance. It supplements the various credit ratings, Cato’s and Heritage’s economic freedom rankings, the world’s fastest growing economies chart, most liveable city tables, the UN’s human development index, the global competitiveness report and the international corruption index. 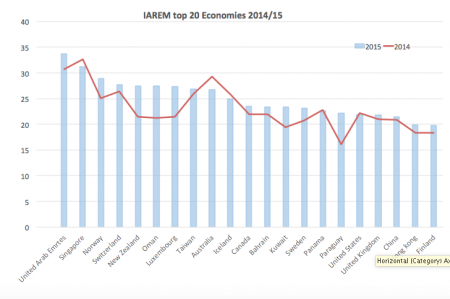 The top ten IAREM outcomes for 2015 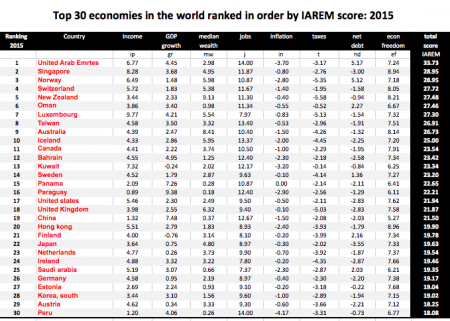 Countries of interest in 2015

Former Canadian Prime Minister Stephen Harper could consider himself a bit hard done by. His Conservative Party lost the October federal election after a campaign focussed largely on the economy. In fact, Canada’s score increased significantly over the year from 21.98 to 23.54, retaining a creditable 11th world ranking.

The USA’s economy continues to struggle as the nation enters an election year. Ranking fell from tenth to 17th, with lower GDP growth and median wealth. All other indicators were steady, resulting in the IAREM score declining only a fraction of a point. Like Australia – and Iceland, Panama and Luxembourg – the U.S. was just overtaken by other economies surfing the current benign waves just that much better.

We shall see if it’s still cranking in 2016 and who is able to get the best rides.

1. All major developed and emerging economies were evaluated, 75 in all. Excluded were poor developing countries, the tiny island states and kingdoms where valid comparisons are not feasible: Liechtenstein, Macao, Monaco, Vatican City and Qatar.

2. The only change to the methodology from that applied in 2007, 2013 and 2014 is that inflation data was drawn from tradingeconomics.com rather than the World Bank in order to use the most recent figures.

3. See also footnotes in the first article in this series regarding methodology.

4. The author welcomes interaction. Readers are invited to join the discussion below and at the IAREM facebook page. Further data will be readily supplied.