From world’s best economy in 2013, Australia has tumbled each year in the IAREM global rankings, dropping to 13th in 2016 and now down to 18th. IA’s econometrics specialist Alan Austin reveals the winners and losers for 2017.

And, as we have come to expect, it’s commiserations to Australia and to … no, only to Australia.

We now have five consecutive years of IAREM rankings. Plus the 2007 base year, just before the global financial crisis (GFC) whacked all developed countries. So we can track the progress of all economies through the current strong recovery period.

There are predictable winners and losers this year, and some surprises.

These are income, growth in gross domestic product (GDP), median wealth per person, jobs, inflation, tax levels, net debt and economic freedom. It is a simple formula, easily replicated by anyone with the internet, spreadsheet software and an interest in econometrics:

This is the world’s only multi-variable index of overall economic performance. 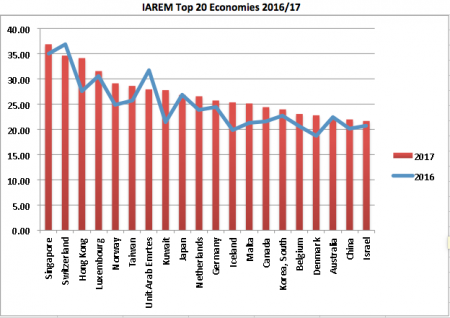 Top economies according to the 2017 IAREM outcomes (with 2016 scores in brackets) are:

Only Germany is missing this year, replaced by Kuwait, which has moved up impressively from 21st in 2014 to 15th last year and to eighth now. That is on the strength of healthier employment, inflation and economic freedom.

The next ten, travelling relatively well, are:

The third ten are:

Landing in the top 30 this year are Finland, Vietnam, Panama and Estonia. Out are Bahrain, the United Kingdom, Saudi Arabia and Malaysia.

Top 30 economies in the world ranked in order by IAREM score: 2016 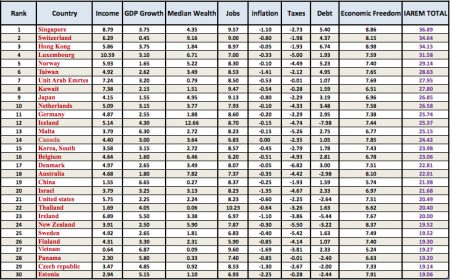 Tiny Malta advanced to 13th place, up from 16th last year and a lowly 54th the year before. Malta is an example of a small economy taking full advantage of the current global trade and profits boom.

Russia surged into the top 40 this year, up from 61st last year and 68th the year before. That is on the basis of containing inflation, improved GDP growth and higher median wealth and economic freedom.

Other impressive rises this year include Norway, Iceland and Thailand.

Several countries not so long ago considered poor, developing nations are advancing under current conditions. China, Thailand, Vietnam, Malaysia and the Philippines are in the top 40. Singapore, Hong Kong and Taiwan are in the top ten.

Japan slipped slightly this year to ninth place, from sixth last year. That’s still an impressive rise from 36th in 2014. Similarly, South Korea has zoomed up the charts from 28th in 2015 to 15th now.

China has remained at about the same rank for four years, at 16th, 19th, 20th and now 19th again. This may seem odd given the indications that China is becoming the world’s economic powerhouse. What is probably happening here is that China’s economy is indeed improving relative to the rest of the world – but so is the accuracy of its statistical measures. Earlier numbers may have been exaggerated somewhat.

No other country in the world has collapsed as badly.

The two variables which deteriorated over the last year were GDP growth and government debt. The others either improved slightly or stayed about the same. The reason Australia slipped again in the rankings is not so much that its performance retreated, but comparable countries advanced.

Australia is clearly one of very few economies missing out on the strong global recovery following the GFC.

On the positive side, analysis of Australia’s policy changes since 2013, will inform the world on precisely what governments should not do.

2. A minor change was made this year to calculating net debt by changing the divisor from 3 to 2.5. This enables a fairer contribution of government debt to the formula — recognising that high debt is not necessarily undesirable. This does not impact rankings unduly.

3. A minor change was made to the inflation calculation to reflect the reality that most countries now regard a small positive inflation rate as optimum. The base point was changed from zero to 1.5%. Again, this does not change rankings materially.

4. The author and publisher welcome interaction. Readers are invited to join the discussion below and at the IAREM Facebook page. Further data will be readily supplied.

Jobs and growth? Both collapsing under Turnbull, Morrison and Cashhttps://t.co/StWKM6YHDJ