Tax cuts, and other zombie notions practised by the Coalition

False economic doctrines that refuse to die apply in Australia as much as the U.S., with equal impact, writes Alan Austin.

COUNTLESS AUSTRALIAN voters steadfastly believe ideas which are not just wrong but the glaring opposite of what is plainly true. This is one reason Australians are currently stuck with a Government incapable of serving the people in most critical areas.

Australia is not alone in this but arguably suffers from it to a greater extent than most other developed nations, with the possible exception of the United States.

'The ultimate zombie ... [is that] tax cuts pay for themselves — a claim that has been proved wrong again and again over the past 40 years.’

‘a belief or doctrine that has repeatedly been proved false, but refuses to die; instead, it just keeps shambling along, eating people’s brains.’

How zombies ate the G.O.P.’s soul. Everyone with honor, principles and integrity has left the party.https://t.co/jjQzMi2HwC pic.twitter.com/BFYaWcd3xx

Krugman instanced as ‘the ultimate zombie in American politics’ the assertion that ‘... tax cuts pay for themselves — a claim that has been proved wrong again and again over the past 40 years.’

He said there are other zombies,

'like climate change denial, that play an almost equally large role in our political discourse.’

Significantly, Krugman claimed that ‘all of the really important zombies these days are on the Right. Indeed, they have taken over the Republican Party.’

Much the same is true in Australia. Virtually all the brain-eating misconceptions serve to support the Coalition and undermine Labor. Let’s consider some examples, just in the realm of Federal economics.

We can start with Krugman’s first example, which is just as undead in Australia as in the U.S. — the issue of tax cuts.

1. Tax cuts pay for themselves

Before the 2013 Election, then Opposition Leader Tony Abbott told voters that among his “important commitments” were:

“personal tax cuts without a carbon tax ... They will boost participation and productivity. They will produce a stronger economy and more prosperous citizens.”

Despite all the evidence that this was voodoo economics at its most primitive and superstitious, the voters made Abbott prime minister. Both Abbott and the tax cuts proved disastrous.

2. Taxes are lower under Coalition governments

This is one of the most invasive zombies to emerge from the cemetery of political thought that is the Liberal Party. In last year’s Budget speech, Treasurer Josh Frydenberg said his Government was delivering “a stronger and more competitive economy, with lower taxes and more jobs.”

The data shows the opposite is true. Labor is Australia’s party of lower taxes. 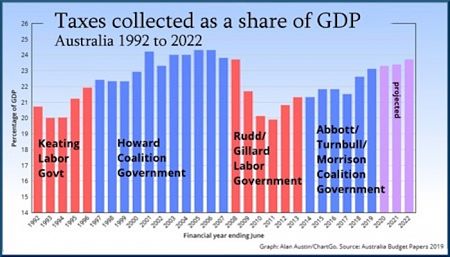 3. The Coalition inherited a $48.5 billion deficit from Labor

In his Budget speech, Frydenberg claimed his Government had achieved “a $55 billion turnaround from the deficit we inherited six years ago”. On a recent ABC Insiders program, he repeated that the Coalition inherited “a $48.5 billion deficit.”

These assertions are grotesquely infected shufflers. The last Federal Budget which Labor framed and completed was in 2012-13. That was a deficit of just $18.9 billion, close to the lowest in the developed world that year. It was the Abbott Government which delivered the horrendous deficit of $48.5 billion in June 2014 — nine months after Labor lost office.

Twice in his Budget speech Frydenberg referred to “Labor’s debt”. He does this routinely to ensure this idea remains in a lethargic coma forever.

As we saw here earlier this month, of all debt in current dollars since 1854, the Coalition has added more than half. 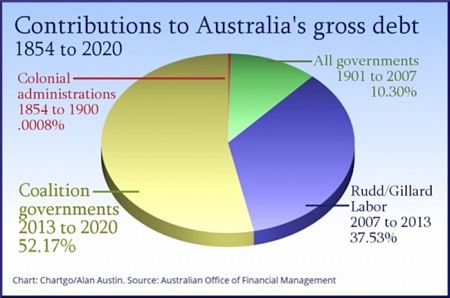 Last Friday, Australia’s gross debt was $570 billion, an increase since the Coalition took office of $298.3 billion. Calculated as current dollars of debt added per year by prime minister, the highest has been Abbott with $58.5 billion, followed by Turnbull with $48.9 billion and Rudd (including both stints) in third place with $36.8 billion.

Rudd, it ought be noted in contrast to Abbott and Turnbull, had to contend with the worst global recession in 80 years.

Frydenberg routinely claims “the economy has been very resilient through pretty tough circumstances ...”.

The living dead walk again. The global economy has boomed over the last several years. No OECD member country is now in recession. The trade war between the U.S. and its trading partners has benefitted Australia as much as any country. Demand and prices for Australia’s exports remain extraordinarily high.

6. The current budget is now back in surplus

"Tonight, I announce that the Budget is back in the black," said Treasurer Frydenberg last April. According to January’s monthly report from the Finance Department, the Budget at 31 December was still in deficit by $15.17 billion.

7. The Coalition is better at managing the economy

This is the most cannibalistic undead notion of them all. Because it is not just the case that Labor is slightly better at managing the economy in a close-run contest. The actual facts and figures show that Australia’s Labor governments from 1983 to 1996 and from 2007 to 2013 were among the best in the developed world. In 2012 and 2013, Australia’s economy was the best the world had ever seen. Coalition administrations before, between and after these, all generated economic outcomes well down the global tables. Australia’s current ranking is a shameful 28th.

8. The mainstream media’s role is to report economic outcomes truthfully

Can these reanimated corpses be cured?

Unfortunately, there is no magic incantation or psychoactive serum available to cure or destroy these zombies. As moviegoers know, they are hard to kill.

We do know, however, that these walking dead are given the semblance of life by the Coalition parties and the mainstream media, led by Murdoch’s News Corp.

Joining boycotts of all toxic publications and advancing the live and wholesome alternative media will at least slow the undead notions wandering the land to torment the living.

I have been reading @JohnQuiggin's excellent book, Zombie Economics: How Dead Ideas Still Walk Among Us https://t.co/dfvXmbcgtt
and thinking that it would be great to write a parallel text on Zombie Psychology. The hardest task might be keeping it down to a readable length. pic.twitter.com/xv0aX5VmwN