Morrison Government breaks debt records in December — along with promises

Australia’s government debt and the interest on that debt keep rising, despite Coalition denials. Alan Austin updates the record.

This was revealed by Treasury and the Finance Department last Friday – just two days after Prime Minister Scott Morrison told the National Press Club that “going into 2020 the fundamentals of our economy are strong and in good shape”.

That speech was delivered just six weeks after Frydenberg announced to the world that “the Government is living within its means, paying down Labor's debt".

Treasury and Finance refute these ministerial mendacities, comprehensively. Friday’s documents are the weekly debt update from the Australian Office of Financial Management, a branch of Treasury, and the monthly Finance Department statement, which updates most budget numbers.

The craven hypocrisy of the Morrison Government is exceeded only by that of the mainstream media, which steadfastly refuses to report any of the miserable milestones reached last Friday.

The Coalition has now added 52% of all Australia’s debt accumulated since 1854.

The media cannot claim that they do not see these announcements. The Australian Financial Review ran a brief news item on the Finance Department’s statement which noted the spending increase since the MYEFO, lower tax revenue than forecast and the threat to the sacred promised deficit.

But it ignored the main news staring the AFR’s economics correspondent in the face. If this statement had been issued while Labor was in office, these would likely have been the screaming headlines:

Those are indeed the points to emerge from Friday’s documents. These results bolster the evidence that this is the least competent administration in Australia’s post-war history – if not its entire history – and one of the two worst governments in the developed world today.

The dismal debt and deficit data

Gross debt plumbed the new depth of $568.1 billion last Friday. That is $33.7 billion deeper than when Frydenberg bragged in his April Budget speech about “climbing the mountain” and reaching “our goal of eliminating Commonwealth net debt by 2030 or sooner".

It is up a staggering $296.4 billion since the Coalition came to office with the solemn promise to reduce what it decried as Labor’s "debt timebomb".

Of all gross debt added by all governments since 1854, the Coalition has now added 52.17%. See pie chart, just below. 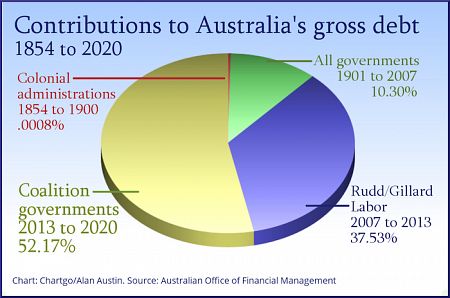 But here are the things to note. The green wedge in this chart included the Great Depression, World War I and World War II. The blue segment included the devastating global financial crisis (GFC) which necessitated vast borrowings in every developed economy in order to keep them out of severe depression.

But the yellow segment, under Coalition management, coincided with the strongest global boom in trade, jobs, profits and government revenue since World War II. That period, 2013 to 2020, is when all well-managed economies have drastically reduced government borrowings.

Israel is the first of the 36 wealthy OECD countries to record its debt position for 2019. The others will follow in months to come. 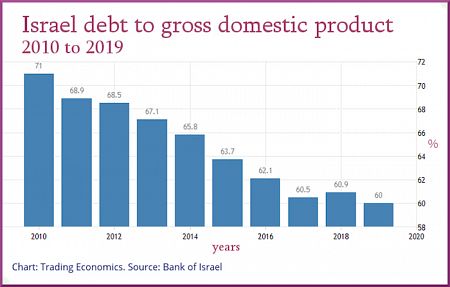 Israel is one of more than 40 economies worldwide and 16 OECD members now in or close to budget balance or surplus*. Most of these should show a continuation of the pattern evident up to 2018 in, for example, Ireland: 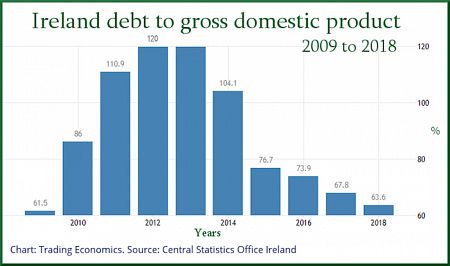 When we get the 2019 data for all 36 OECD countries we will be able to update the comparative chart showing Australia’s ranking on debt expansion. Will Australia still be second worst, as it has been up to 2018? Or will it have fallen behind Chile to become worst? We shall soon see. 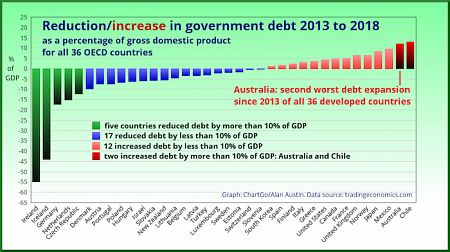 Interest on the debt

Australian voters with good memories will recall former Treasurer Joe Hockey before the 2013 Election bewailing that Australians were paying “$35 million a day in interest. That’s $13 billion a year.”

That was indeed the interest bill then. What Hockey neglected to add was that Treasury and Finance set out the basis for this scenario in the 2013 'Pre-Election Economic and Fiscal Outlook'. if Labor’s policies continued, the interest bill would increase to about $41 million a day in 2016, then reduce to $36 million in 2018, down to $27 million in 2020 and decline further from there.

Hockey and his hapless successors then changed virtually all Labor’s settings and the interest paid in December hit $1,566 million, which was $50.5 million per day. Given revenue is still falling behind forecasts and spending is increasing, further interest hikes are likely.

The role of the media in falsifying the record is destructive, contemptible and ongoing.

Federal debt was the critical issue the media used to destroy the last Labor Government. One example is an article in The Australian in which senior economics “writers” Judith Sloan and Henry Ergas condemned former Prime Minister Kevin Rudd as ‘uninterested in economics, contemptuous of process, the most recent incarnation of "whatever it takes" man in a party tainted by corruption and cronyism’. Strong words. Based on what?

‘... in the 935 days between becoming prime minister on December 3, 2007, and Julia Gillard's coup of June 24, 2010, Rudd left Australians with at least $153 billion in unfunded fiscal burdens while wasting $100bn of the community's resources.’

Yes, looks bad. But remember Rudd was responding to the worst recession in 80 years. Virtually all independent commentators believe he did so better than any other national leader. At the end of his tenure, Australia had the world’s best-performed economy. By a street.

Compare that with the latest 935 days under the Coalition. Net debt has increased by $118.4 billion. Gross debt is up $130.1 billion. The interest bill is $50 million per day. All this during the greatest worldwide economic recovery in living memory. Australia’s economy now ranks 28th in the world.

So what do Sloan and Ergas have to say about the current inept administration? Not a peep. Move along, please. Nothing to see here.

Australia is in a whole world of economic bother. And it is @LiberalAus who put us there. These figures don't take into account the disastrous bushfires happening now either. #auspol #NotLaborsFaulthttps://t.co/7IsozdmAgo