Worst three years in retail ever: Thank you, Coalition Government

THERE WAS NO Christmas joy for Australia’s impoverished shopkeepers in December. Retail sales figures confirm the Coalition has cursed the retailers with the worst sales slump since records began.

Shop owners, their workers and the retailers’ peak bodies were fervently hoping pre-Christmas sales would boost total revenue for the year 2019 at least above the dismal total for 2018. Didn’t happen.

For the third consecutive year, total sales declined from the previous year after adjusting for inflation and population increases. Australia has now been in a per-capita retail recession for three straight years. This is the first time this has happened since the Australian Bureau of Statistics (ABS) began keeping sales data in 1983. Thank you, Treasurer Josh Frydenberg. Thank you, Prime Minister and former Treasurer Scott Morrison. Thank you, Coalition Government.

Retailers no longer with us due to receivership or bankruptcy in 2019 include Shoes of Prey, Ed Harry,  Forever 21, Skins, Napoleon Perdis, Karen Millen, Benny Burger, Muscle Coach, Criniti’s restaurant chain, Co-op Bookshop, Bardot, Harris Scarfe, and Dimmeys — which had been with us since 1853.

Worst retail trade period on record. Why? 'Because Australian citizens no longer have the discretionary spending power they have long enjoyed' What a surprise. Not. -Retailers also thrown on the Coalition’s scrapheap https://t.co/tBqU0w4umC @IndependentAus

A common misconception is that the retail slump in Australia, the U.S. and elsewhere is due to shops being forced out of business by booming online sales. Not true. ABS sales figures include online sales through Amazon, The Iconic, eBay and others.
Popular furniture and homewares company Zanui collapsed in October, leaving many angry customers out of pocket. Zanui was an online outlet.

The sad and sorry stats

The ABS data released last week shows total retail sales came to $27.8 billion in December. That was $151 million below November’s total. Sales for the full year were $329.6 billion, an increase of just $8.8 billion over the 2018 tally of $320.8 billion. That is a percentage increase of just 2.74, below the rise needed to keep pace with inflation, which was 1.8%, and population growth, currently 1.6%.  [Figures are from ABS file 8501.0 Retail Trade, Australia, Table 1, seasonally adjusted.] 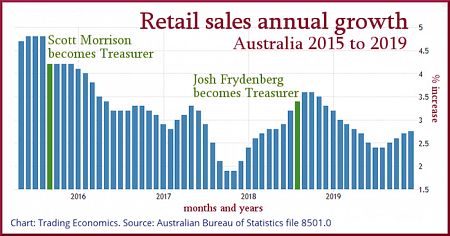 Some sectors performed satisfactorily, including food up 3.6%, pharmaceuticals and cosmetics up 5.4% and footwear and personal accessories up 5.2%. People still wear shoes, it seems. And eat.

There was no significant increase in spending on electrical and electronic goods or on hardware, building and garden supplies. Restaurants and cafes increased by 2.9%, which is just 1.1% after inflation.

The ABS stated in its December update that:

'... some retail businesses reported negative impacts to retail turnover from bushfires in New South Wales in the December month, especially in Food retailing and Cafes, restaurants and takeaway food services’.

It said further impacts may be expected in other states and territories in the January statistics, due in early March.

This does not offer any excuse for the annual figures, however. It may well be that overall turnover was boosted by extra sales of bottled water and other emergency goods and replacement of items destroyed. We cannot be sure either way.

Real reasons for the retail recession

As explained by various observers at IA here, here and here, and in several other alternative media outlets, the policies of shifting wealth and income to the rich via reducing wages, lowering pensions,  tax cuts and failing to collect company taxes have severely reduced the incomes of countless Australian shoppers.

The rule applies generally — increasing spending power at the bottom end of the wealth and income percentiles leads to stronger retail sales and positive flow-on from there to the rest of the economy.

Retail peak bodies have themselves to blame

The Australian Retailers Association (ARA) has failed completely to diagnose the problem facing its members. It appears to have embraced fully the agenda of the Coalition parties, the multi-national corporations and the foreign-owned media.

In its budget submission last year, the first five of the ARA’s 35 recommendations related to taxation. The third actually calls for lower tax rates — the very opposite of what is needed to fix the current retail malaise. Tax rates are the last thing of concern to shopkeepers desperate to break even. Taxes are not a cost to business operations. They only arise when all revenue has been banked, all expenses have been paid and profit has been generated. Countless retailers are far from this happy situation and will never get there until the economy gets disposable income into the pockets of the majority of Australian shoppers.

Strong and stable economy my arse!

Australia is not the only developed economy with retailers struggling and many going broke. The United States is experiencing what commentators refer to as a “retail apocalypse”. Thousands of retail foreclosures are costing investors billions of dollars and impacting economic growth and jobs.

In contrast, Ireland has implemented a progressive tax system, which shares wealth and income more fairly and gives low-income people some spending money after paying the rent, power bills and basic food. Ireland’s retail sector enjoyed a lift of 5.8% in total sales in December over the year before. Since emerging from recession in 2014, Ireland’s retail sales have grown by 5.6% annually. Australia’s growth over that period has been a dismal 3.6%.

What makes Australia so bizarre is that most indicators of wealth and income generation are at record highs — export values, the trade surplus, the current account surplus, corporate profits, executive salaries and stock exchange indices. Global conditions today are better than ever before for a prosperous local economy. It is a profound tragedy that the Coalition is incapable of taking advantage of this. And it is an abomination that the craven mainstream media refuses to expose this.

The one bright spot in the December figures was the $30 million increase in alcohol sales in December over the year before. Now that makes perfect sense.