A decade ago, as the world battled the global financial crisis, Australia’s economy zoomed to the top of the international table. Alan Austin was there and taking notes.

IT TOOK 108 years since Federation, the worst global recession in 80 years and gutsy decisions but Australia did it: world’s best-performed economy in April 2009.

Australia’s growth rate in gross domestic product (GDP) topped the developed world for the first time in the 2009 March quarter. Virtually all economists worldwide – certainly, in Australia – had expected the economy to contract, probably quite deeply.

"What is happening internationally is absolutely diabolical ... Nothing Australia can do will stop recession here because it's recession everywhere.”

But Australia’s economy grew by 1.1% that quarter, generating an annual GDP growth rate of 1.5%. This was the highest of all 36 member countries of the Organisation for Economic Cooperation and Development (OECD).

Only two other countries experienced annual growth that quarter – Poland by 0.4% and Norway by 1.1%. All other economies contracted, many of them disastrously in terms of job losses, business failures and suicides.

Which OECD Nation delivered the WORLD'S best Economy during the GFC? pic.twitter.com/hhdEoqGAwA

Australia’s jobless rate for the first four months of 2009 averaged 5.36%. Over that period, new jobs exceeded 5,500 — an extraordinary result compared with elsewhere.

Australia’s ranking on jobs in the OECD, according to the World Bank DataBank, was 9th in 2009. Current ranking, in contrast, is 19th.

Hours worked per adult per month

This key indicator remained strong and steady through 2009, never falling below 86.2, despite the turmoil. In contrast, this fell below 85 four times during the dismal Abbott and Turnbull years.

Gross domestic product per capita in 2009 was US$51,690 (AU$72,097) — the fifth highest in the world, behind Luxembourg, Denmark, Norway and Switzerland. That was up from tenth place just three years earlier, having overtaken the Netherlands, Sweden, Ireland, the United Arab Emirates and the USA.

Australia was one of only two OECD countries which kept interest rates within the optimum band of 2.6% to 4.8% through the GFC. The other was Mexico.

Interest rates fell below one per cent in the USA, Canada, Sweden, Denmark, Singapore and the United Kingdom. Others copped high interest rates, including Iceland, Argentina, Brazil and Vietnam which all soared above ten per cent.

In 2009, Australia topped the OECD for the first time on economic freedom, according to Heritage Foundation’s rigorous analysis. Australia rose from fifth place in 2006 to second in 2007 and 2008, then to top spot in 2009 — where it stayed until 2015.

Value of the Aussie dollar

From below 64 U.S. cents in January 2009, the Australian dollar recovered to 80 cents by the end of April. It continued to appreciate from there – thus enhancing the wealth of all Australians – to end 2009 at 88 U.S. cents. It continued to rise thereafter, reaching US$1.10 in July 2011. 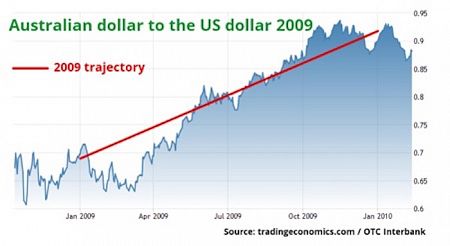 Two datasets reveal debt levels relative to the rest of the developed world. Trading Economics shows Australia third lowest in 2009, behind only Chile and Estonia. The IMF data, which calculates the debt differently, ranks Australia third behind Estonia and Luxembourg.

From ranking ninth in the world in 2007 on the Independent Australia Ranking on Economic Management (IAREM), Australia rose in 2008 to third place, behind Luxembourg and Kuwait.

It then surged to top spot in 2009, ahead of Norway, Luxembourg, Singapore, the United Arab Emirates, Finland and Switzerland.

The IAREM is a composite index which ranks all world economies on the eight key outcomes most citizens require of economic management.

This ascendancy was no accident. As outlined here and here, critical decisions were taken which were perceived as extremely risky at the time. Heavy political costs were born when the Rudd Government copped the condemnation of the craven Coalition Opposition and large swathes of the malicious mass media.

As chronicled here in 2016, the verdict of independent observers abroad has been overwhelmingly positive.

Those accolades keep coming, including from Stephen Bell and Paul ‘t Hart in the Netherlands:

Success, luck or failure? By any standard, the GFC was a remarkable episode in Australian public policy. The sheer scale of the crisis response moves that were made continues to impress ... These were audacious moves, outright ‘policy gambles’ under conditions of radical uncertainty. The key question, of course, is: does all this end up to being a ‘great policy success’ – a triumph of willed non-occurrence of negative events?