Despite a record three years of surging exports, Australia’s economy is the stand-out failure in the developed world. Alan Austin reports.

OVER THE LAST three years, global demand for Australia’s exports has reached levels undreamed of by earlier administrations. The world spent more than $470 billion buying Australia’s goods and services in the last financial year. That’s 16.5% higher than the year before. It is 53.3% higher than in Labor’s last year.

Australia should now be rolling in unprecedented wealth and income. The economy should now be the most successful ever — relative to earlier periods in Australia’s history and relative to the rest of the world. But it isn’t.

It isn’t, because the export contracts were not made with the people of Australia or their representatives. Sales were made by the big multinational corporations which the Morrison Government allows to dig up or plough up and ship out Australia’s produce — with little or no return to Australia.

As a consequence, Australia is now an also-ran on about half the key indicators of economic success. It has tumbled to near the bottom ranking on another one third. And is now coming dead last on the rest.

Here, for example, is the chart showing generosity in benefits for workers between jobs. Australia is last among the 36 developed members of the Organisation for Economic Cooperation and Development (OECD).

The trade data in detail

Most categories of exports identified by the Australian Bureau of Statistics (file 5368, table 12a) show extraordinary recent surges.

Mineral fuels and lubricants sent offshore increased in value 30.3% in the last year and by an astonishing 124% over the last three years. That was the highest ever recorded.

The value of natural and other gases exported in the last three years comes to a thumping $105.5 billion. That is more than during the entire 18 years of the Howard, Rudd and Gillard governments. So the Coalition’s economy should really be having a gas of a time.

What matters most, of course, is the quantum of exports overall. Goods exported increased by 18.4% in the last year and by an extraordinary 53.0% over the last three years. That was the second greatest rise in history, shaded – only just – by the minerals boom of the late Howard years.

Exports are surging almost across the board. The ABS recorded all-time records in more than 50 categories for the year to June.

This is well illustrated by the export values chart published by tradingeconomics.com. This reveals the dramatic increase in demand from abroad over the last three years:

Hence it is no surprise that through the current global boom, Australia’s export growth has led the developed world. From the data on export volumes at tradingeconomics.com, we can calculate the growth in exports over the last three years, from June or July in 2016 to the same month in 2019.

Among the 36 wealthy OECD members, Iceland has the lowest growth at just 2.2%. The average is a healthy 22.9%. Australia is way out in front with an extraordinary 55.8% increase. 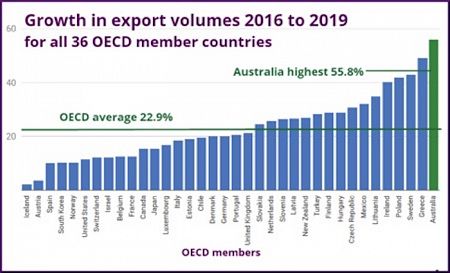 What is actually happening

This truly has been a period of remarkable exploitation of Australia’s valuable resources — but for virtually no gain to most Australians.

The Government has allowed the big multinational corporations to export these commodities without requiring a fair share of the wealth generated to be retained in Australia. There is no longer a minerals resource rent tax (MRRT). There is no effective energy policy. There is no cohesive agriculture policy. There is no plan to manage the sale to foreign governments of cattle and sheep properties, ports, airports or scarce water resources. Tax avoidance and evasion are now rife.

There is no indication this regime even understands social justice, let alone is committed to pursuing it.

China now owns 10 times the amount of Australian land it did last year https://t.co/HmSMI1Gwda via @smh

Unsurprisingly, the economics writers for the daily newspapers and specialist business press have barely breathed a word about trade volumes and values and the nation’s massive loss of wealth. They do not want to disturb the cosy relationship with the current administration — which gives them cash handouts as well as advertising income.

What should be happening

Company tax revenues should now be steadily increasing instead of stagnating. Corporate tax relative to profits in the last financial year was actually the second-lowest since 2011.

Pensioners should now be able to live in greater comfort and freedom from financial stress than ever before. Benefits should be at an all-time high relative to average earnings, instead of declining steadily. 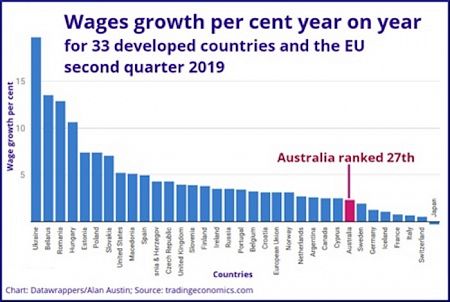 Australia’s median wealth should be highest in the world, as it was from 2010 to 2013, instead of slipping backwards. Infrastructure investment should be advancing rapidly rather than receding.

Australia should be at the head of the pack of 40 or so countries now in budget surplus, instead of one of the laggards still in deficit. Australia’s net worth should now be at an all-time high, instead of the current all-time low.

Could be. Should be. But will never be under this administration. Such is Australia’s doom.

The government has no plan for our economy.

They think that the slowest growth since the GFC is something to spin.

Worse their surplus is based on targeting the most vulnerable in our society through robo-debt and underfunding the NDIS.

This is not a record to be proud of. pic.twitter.com/ES8uobRqkp

20 December 2021, 7:00am The latest report to Parliament on the state of the economy by Coalition ministers ...

13 December 2021, 7:00am The case for a review of Insiders and sacking its producers, presenter and most ...
Join the conversation
comments powered by Disqus
News updates