Questions have been raised over Prime Minister Malcolm Turnbull’s political judgement, after one of his new ministers, Mal Brough, last night allegedly lied about his involvement in the “Ashbygate” scandal, before then angrily bullying a female ABC radio presenter.

Brough, once a minister in the Howard Government, appeared to blatantly lie in response to a question about whether he had arranged for Slipper staffer James Ashby to copy the then Speaker's confidential work diary — something Brough had openly admitted to Channel Nine’s 60 Minutes last year. 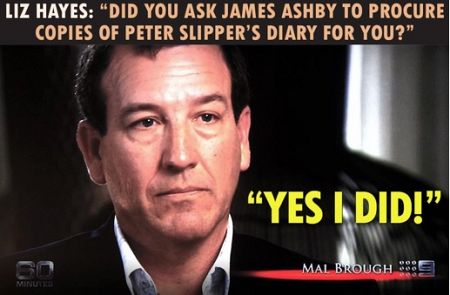 After an amicable start, Alberici raised Brough’s involvement in the plot against Peter Slipper in the latter stages of the interview.

Brough: “No, that's not correct. I mean, I know that that's what's been reported, but that is not exactly the right description of what occurred. But what I can tell you is that I stand by every action that I've taken...”

Alberici: “What part of what I just said then was not accurate?”

Brough: “Well all of these matters have been canvassed and dealt with by the courts, not that I was ever involved ...”

Alberici: “But you've previously admitted that you asked for the procurement of those diaries. You've admitted on the public record.”

Brough: “When you ask me a question, I'm trying to give you a straight answer…”

However, in a 60 Minutes exposé aired on 7 September last year, Mr Brough openly admitted to procuring James Ashby to take unauthorised copies of the official diary of the then Speaker of the House of Representatives:

Liz Hayes:  “Did you ask James Ashby to procure copies of Peter Slipper’s diary for you?”

Shadow Parliamentary Secretary to the Shadow Attorney-General Graham Perrett wrote to the CDPP at the time, asking for both Ashby and Brough to be prosecuted over this admission.

In a press release issued today, Perrett made the following statement:

Special Minister of State is a particularly important portfolio having responsibility for key integrity agencies such as the Commonwealth Ombudsman, the Australian National Audit Office, the Australian Electoral Commission and administration of the parliamentary entitlements framework.

Mr Brough’s involvement in [the] Ashby Affair raises serious questions about whether he is fit for this important office.

The revived minister also appears to have lied about a Federal Court judgement that stated Brough was involved in a “combination” to bring down Peter Slipper, saying Justice Rares’ judgement had been “overturned” on appeal.

However, this is incorrect. Rares’ ruling had not been “overturned”, but rather set aside, with an appeal being granted against Rares’ judgement of an “abuse of process” by Ashby and his lawyers, Harmers. You can find out more details about this HERE and HERE.

Brough furiously demanded Alberici read out the ruling by the Federal Court. Alberici did not have it on hand and so Brough again attacked her angrily, demanding she read it out the following night. (It should be noted that Brough has reportededly had difficulties controlling his rage on a number of occasions in the past.)

Malcolm Farr recalls Brough's tanty at a Press/Pollies cricket match. Nasty piece of work then. He still is #auspol http://t.co/gLJatCCCAG

The minister was presumably referring to the following two paragraphs from the majority judgement (one of the three judges did dissent from this ruling):

We are satisfied that the evidence before the primary judge did not warrant the adverse finding said to constitute and abuse of the Court’s processes on the two bases found and did not warrant the rejection by his Honour of the sworn and unchallenged evidence of each of Ashby and Harmer.

This meant the Court had granted leave for the full case to be heard again from the beginning — something the appellant, Ashby, chose never to pursue.

This was no sort of vindication for anyone involved, particularly not Brough, since it left open the likelihood of Rares’ findings against him being supported should the case ever been heard again.

More importantly, a later judgement by Justice Flick overturned the costs order against Slipper, saying Ashby had denied Slipper justice by not pursuing the appeal.

Had the matter proceeded to hearing, it would inevitably have been the case that the competing factual accounts would have been vigorously contested.

This left Ashby needing to pay all his own costs — a significant, and costly, defeat.

Flick’s ruling an Ashbygate gamechanger http://t.co/k0sw3lSohi @IndependentAus A long way from over.

It also means that Brough’s statement that the matter had been fully dealt with by the court was misleading and, arguably, another lie.

Questions must be raised about Malcolm Turnbull’s political judgement in appointing as special minister of state − with power over the electoral system and the Federal Ombudsman, amongst other key responsibilities – someone who is tarnished by his involvement in sordid political intrigue, has anger management issues and, even more importantly, has an incredibly cavalier attitude towards the truth.

Graham Perrett says the position of Special Minister of State is too important to go to a person of such questionable integrity:

The Australian people expect Mr Turnbull’s new government to be equipped with people appropriately appointed to carry out their responsibilities. The Special Minister of State position is too important to be used as a reward for treachery.

It should also be remembered that Independent Australia has proven beyond any shadow of a doubt that Brough has lied about his involvement in Ashbygate on numerous previous occasions.

There is also significant questions about the manner in which Brough brought about the Northern Territory Intervention as Indigenous affairs minister during the Howard Government years, which suggest he was involved in a calculated deception also, curiously, involving Lateline.

As we reported on IA:

In 2006, when Mal Brough was Minister for Indigenous Affairs in the Howard Government, he went on Lateline on May 16th and made the brazen claim that paedophilia was rife in Aboriginal communities and that

“Everybody in those communities knows who runs the paedophile rings.”

Consequently, the accusation caused a stir and Brough was challenged to provide evidence to back up the statement — which he never did. Five weeks later, after Lateline apparently receiving many calls and tip offs that supported Brough’s claim, they pursued the story further and landed an exclusive interview with a former “youth worker” who witnessed such crimes in an Aboriginal community. Later it was found out the so-called “youth worker”, whose name and identity was concealed in the interview, was actually Gregory Andrews, a senior bureaucrat in then Minister Brough’s own Department.

Emergency Intervention: Is Turnbull About To Bring Back Brough; Declare War On Black Oz? http://t.co/rbBjk0bB3i pic.twitter.com/MCvbKMPGil

And with Independent Australia and Ross Jones’ three year investigation into Ashbygate being released in book form next month, with Mal Brough having a starring role, Malcolm Turnbull’s honeymoon as new PM could suffer an early hiccup.

You can follow David Donovan on Twitter @davrosz. The Ashbygate book mentioned in this piece is due out in print and e-book form in the very near future. If you would like to pre-order this book, please email us here.