Mal Brough has consistently said any allegation he knew of James Ashby’s affidavit before it was lodged was ‘nonsense’ and a ‘conspiracy theory’. The Ashbygate Trust can prove he lies.

MR SIDESHOW, member for Fairfax, has offered to drop his action against the member for Fisher, Mr Brough, who had accused Mr Sideshow of lying when he said Mr Brough put the bite on him to fund James Ashby’s legal fees.

"My wife said it was in the best interest of the electorate that Mal and I work together to bring about some good things for the Sunshine Coast.”

Pity, as the matter would’ve bought a lot of nasty stuff to the surface.

It’s also a pity the Ashbygate lawyers have just advised the Trust that, while there’s a slim chance of a successful private criminal action against Mr Brough, it wouldn’t be a shoe-in and the consequences of failure ‒ i.e. costs ‒ are too horrible to contemplate.

What to do with Mal Brough?

The AFP have shown themselves to be ashtrays on the motorbike of justice, the Federal Court has taken over 6 months to consider Ashby’s leave to appeal and is still cogitating, now Mal has access to the levers of power. Slipper is in no position to fight a war.

Our options are starting to narrow, but there is still that good old standby, truth,  held firm by its twin, evidence.

They make a good team.

We invite Mr Brough to rebut any of the allegations we are about to raise, including that he deliberately lied to the electorate and that, as a consequence, his election was fraudulent. We will advise readers, and our lawyers, immediately we hear from Mr Brough. Don’t let your dinner go cold.

Captain Brough’s army record will not be public until about 2020, but we hope he was in something like the catering corps and not intelligence. 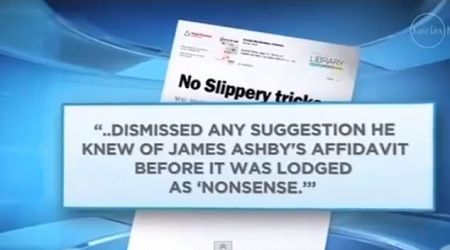 An article by Michael McKenna in The Australian of Saturday 5 May 2012 set the early tone for Mal’s attempt at Black Ops. The intrepid reporter and his trusty photographer trekked to Mal’s Sunshine Coast home on 4 May 2012 and snared an exclusive with Mal and his wife, Sue.

OK. Sprung. Get the admission out of the way. Now, grab the handle of the snow machine and PULL….

‘Mr Brough said Mr Ashby had sought him out for help on the advice of local party official Valerie Bradford.’

Untrue. Mrs Bradford referred Ashby to Brough on 29 March 2012, six days after the pair had met on 23 March — the eve of the Queensland election, the day before the Slippers went overseas ‒ when the cat’s away…

The truth: Ashby and Brough had arranged their meeting all by themselves; Val Bradford was merely an unwitting patsy, there to provide cover for their story.

Val Bradford is a spritely 70-something who happily drives around the Sunshine Coast with a Mal Brough sticker on the back of her car. She didn’t want to go to the meeting with The Australian at Mal’s Alexandra Headland home, so Mal drove the half hour or so to Val’s and asked her to call a number he had on a piece of paper. The call was answered by James’ mother who said James would want her to meet with McKenna.

It was, of course, important for Val meet with the journo so quotes regarding her supposed referral of James to Mal could be woven into the narrative. Presumably to make sure she attended, Mal put her in his own car and drove her back to his place for the meeting.

‘The following week, Mr Brough said he had had another meeting with Mr Ashby in which he advised him to seek his own legal counsel…’

True. Mal and Ashby met on 30 March 2012, a week after their 23 March meeting — but they were not alone; our evidence shows Karen Doane and the mysterious Jackie were also at the meeting.

We’ll call that lying by omission.

‘Yeah all good. I'm hopeful this all comes out within 2 weeks. I'm over the suspens (sic) and not having a lawyer to back me right now. My new lawyer is back in a week. O.’

According to McKenna, Mal

“… said a lawyer friend was at the next meeting with Mr Ashby early last month.”

This is untrue. Russell QC, by his own admission, does not count Mal among his friends. Unfortunate happenstance is more like it.

Mal told McKenna that in this meeting Ashby

‘… revealed he had engaged his own lawyers in Brisbane and was meeting them on April 10.’

That was the next working day after Easter. The lawyers were Harmers.

The story continues in this obfuscatory vein, including the (apparently) totally unnecessary comment by Brough that ‘I did not speak to Pyne, or Pyne’s office, or to Abbott or to anybody like that’. We’ll be coming back to Mr Pyne in the near future.

The Australian article does not once mention Karen Doane.

It certainly does not mention that at 8.36 pm on the evening of 10 April, after James and Karen had met with Harmers in Brisbane, Doane emailed Brough:

Brough has consistently derided any allegation he knew of James Ashby’s affidavit before it was lodged as ‘nonsense’.

Unless he can argue a “deposition” is not an affidavit, this single email shows Brough is a liar. It shows he misled to the electors of Fisher. The only possible conclusion is that his election was fraudulent.

The question remains: how to get the nasty stuff to the surface, up into real life, now that big fluffy pillow Palmer has pulled out? Without the risk of costs?

Ironically, we hope Mal will help.

If Mal has a legal go at the Trust for calling him a liar, we can get everyone into court and have it out. That would be fun and we will win, because our allegations are truth supported by evidence; ergo, Mal’s denials can only be lies. Our lawyers are hard and they’ll get costs, so that’s good.

So whatd’ya reckon mate? We on? Or are you going to let this fester into your obituary?

Wikipedia (2080): Brough, Malcolm Thomas, lent his name to the now-common tactic of deliberately lying to electors while wearing a naff polo shirt ~ (citation) ‘I was Broughed bro. He looked like he was just from Lowes, right?’

Catch up on the full Ashbygate saga here.