By Andrew Kos | 23 August 2012, 12:17am | comments |
Mal Brough has entered the political fray again amidst political controversy over his alleged involvement in Ashbygate. In 2006, he was allegedly involved in another brazen political set-up — then with the full assistance of the ABC. Andrew Kos reports. 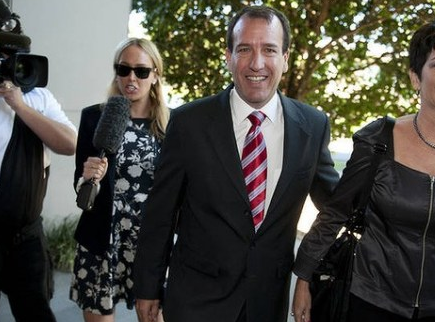 Former Howard Minister Mal Brough has re-entered the political fray, after winning Liberal National Party pre-selection for the seat of Fisher on Queensland’s Sunshine Coast. This renaissance however has been sullied by his unnecessary entanglement in the James Ashby - Peter Slipper affair. Unnecessary, because he was all but guaranteed to take the seat off former LNP party member and newly Independent Peter Slipper at the next election; no machinations on his part were needed to ensure Slipper’s departure.

Brough first dismissed as “nonsense” accusations he had contact with James Ashby prior to Ashby formally lodging his sexual harassment suit against Peter Slipper.

Brough has since admitted he had a three hour meeting with Mr Ashby, and subsequently two more meetings. The nature of these meetings he said were to give Mr Ashby the advice that he should get a lawyer and be absolutely sure that he wants to go through with it. Astonishingly, such simple advice takes three hours to give and a further two meetings to make concrete.

The case is currently being heard before the court and evidence submitted indicates Mr Brough’s involvement was more extensive than the three meetings he was very reluctant to disclose. There are emails that allegedly confirm he also received correspondence from Mr Ashby in the form of a work resumé (to pass around) and asked Ashby for copies of Mr Slipper’s private diary — all before the sexual harassment case was filed.

This whole affair does not look good for Mal Brough and may affect his political prospects — or maybe not. If we cast our minds back to 2006, Mr Brough was caught up in a similar caper but miraculously made it through; but not on his own — he had help from the ABC.

In 2006, when Mal Brough was Minister for Indigenous Affairs in the Howard Government, he went on Lateline on May 16th and made the brazen claim that paedophilia was rife in Aboriginal communities and that

“Everybody in those communities knows who runs the paedophile rings.”


Consequently, the accusation caused a stir and Brough was challenged to provide evidence to back up the statement — which he never did. Five weeks later after Lateline apparently receiving many calls and tip offs that supported Brough’s claim, they pursued the story further and landed an exclusive interview with a former “youth worker” who witnessed such crimes in an Aboriginal community. Later it was found out the so-called “youth worker”, who’s name and identity was concealed in the interview, was actually Gregory Andrews, a senior bureaucrat in then Minister Brough’s own Department.

The shocking revelation was uncovered through leaked documentation from the Department that found its way to the National Indigenous Times. The editor, Chris Graham, ran hard on the story and hounded Lateline over its sloppy journalism and stubbornness in admitting its story was a fraud.

Below are excerpts of the email exchange between Chris Graham, and Lateline’s executive producer, Peter Charley that appeared in Alan Ramsey’s devastating critique back in 2006.

After Times editor Chris Graham persisted with emails to Lateline as to why it had misled viewers by presenting, as an “anonymous youth worker’, a senior Government bureaucrat who was supporting the unsubstantiated word of his minister, the program’s executive producer, Peter Charley, responded three times: on July 15, July 19 and July 20.

The ABC’s Suzanne Smith, who put together the June 21 “special report” featuring the Gregory interview, told Graham by email on July 11: “It is the ABC’s policy not to reveal the names of anonymous sources. Lateline stands by the integrity of [its story] as both fair and accurate.”

Four days later, on July 15, Charley emailed Graham, in part: “In all your political posturing, you appear to have overlooked the fact that the crux of the issue here is the abuse of underage children by a predatory pedophile and a call for help from concerned and frustrated individuals. Are you, too, choosing to skim over this unpleasant reality because it is simply too politically sensitive to handle?”
On July 19 Charley emailed: “To date we have genuinely endeavoured to assist you with your inquiries … I stand by Lateline’s stories and the integrity of our journalists. To the extent your most recent email implies any irregularity or impropriety in our approach, your implications are rejected.”

Finally, next day, Charley ended the exchange. He emailed Graham, in part: “I remain mystified by your apparent determination to discredit a story that cannot seriously be doubted … I cannot, therefore, continue to correspond with you over this matter.”

Which is much more than Brough, his office, Greg Andrews or Wayne Gibbons, all of whom Graham pestered with numerous emails, would say. All sought to kill the story by ignoring it. All refused to answer the central question: why did the ABC agree to hide the identity of a bureaucrat whose bogus interview got his minister off the hook?

(This story was originally published on ABC Gone to Hell and has been republished with permission.)