A split Federal Court has sent the Ashby versus Slipper case back to square one, to be reheard by a new justice. The Ashbygate Trust reviews the decision.

HERE AT THE TRUST’S HQ, we have a picture of Peter Slipper thumbtacked to the wall next to our new Tony Putin 5000 espresso machine.

Taken not long ago, it depicts the former Speaker in rags, on all fours, tongue out, crawling across another endless sand dune of a searing, unforgiving desert.

In a 2 to 1 decision, on Thursday 27 February 2014, the Federal Court granted Ashby’s leave to appeal, with his costs to be borne by Slipper.

‘We are satisfied that the evidence before the primary judge did not warrant the adverse finding said to constitute and abuse of the Court’s processes on the two bases found and did not warrant the rejection by his Honour of the sworn and unchallenged evidence of each of Ashby and Harmer.

The two concurring judges used phrases about Rares’ judgement such as:

‘no more than conjecture and ought not have been drawn’

‘not all evidence touching an issue may have been adduced’. 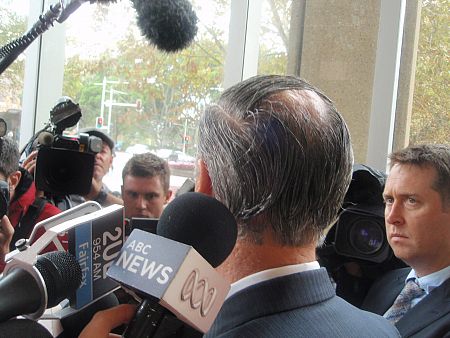 The dissenting judge, Siopsis J, on the other hand, (para 456), concluded:

And what costs they are.

As the dust settled, the man who won his case convincingly in the first instance, with it being thrown out by Justice Rares as an abuse of process, found he needed to pay the costs of his dogged well-funded attacker, with the trial now beginning all over again from the very beginning.

The fact Siopsis disagreed with Mansfield and Gilmour has no effect in the substantive case of alleged sexual harassment — the appeal stuff was all about legalities. $13.50 of Officeworks printout costs indicates these guys covered the ground.

The fact that Siopsis disagreed is also irrelevant to costs, as far as the law is concerned. Even after Rares’ scathing initial decision and even though the Full Court's non-unanimous decision took nine months to deliver.

Sometimes, it is very hard to find the justice hidden within the law. 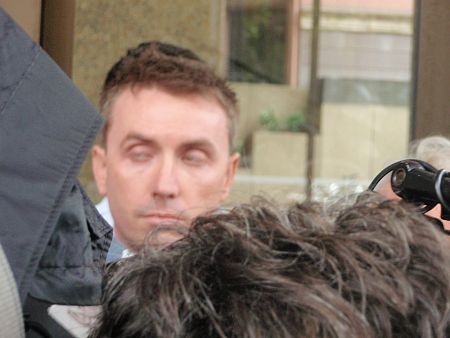 He emerged from the Federal Court on Queens Square ‒ flanked by a beaming Harmer and his well-heeled PR flack Anthony McClellan ‒ with bloodshot eyes.

Those can be the result of many things.

The media gathered, cameras thrust, as Harmer told Australia that basically he was rapt at the chance to continuing to funding Ashby’s ongoing legal endeavours.

These could be seriously interesting, except the man in the desert is skint. So his problem is going to be finding the resources to mount a defence against the specific allegations levelled by Ashby.

We’d love to see Ashby enabler Karen Doane and serial equivocator Mal Brough MP in the box under oath. We wouldn’t mind seeing Russell QC ‒ among others ‒ in there as well.

Slipper has two things on his side, some legal training and plenty of spare time. Should he deign to contact us, he could also have access to the witness evidence and research the Trust has garnered in the course of its investigations over the past year. We are itching to tell someone what we know.

The Trust is not a natural supporter of right-wing religionists and we are far from being Slipper groupies. But the guy is in more trouble than Tim Tyler and it is just the Australian way to help a bloke in need.

Also, we know what a real case will reveal.

We now know a lot more.

Read the full Ashbygate saga on IA here. Find out more about the Ashbygate Trust, or become a member, here.