The Morrison Government's announcement that it would be 'increasing the rate of working-age payments by $50 a fortnight from 1 April' wasn't celebrated by the public.

The Australian reported about the lead-up to this said:

'The base rate of JobSeeker is currently $570.80 a fortnight. But pressure has been mounting on the government to raise the rate with the $150 coronavirus supplement for welfare recipients ending in late March.'

The Australian Council of Social Service asserted that they would have preferred $25 extra a day rather than a week. An extra $3.57 a day is hardly enough. It has, although, lifted the unemployment allowance from 37.5% to 41.2% of the national minimum wage.

That means we will no longer have the lowest level of unemployment benefits as a percentage of the average salary in the OECD. Fifty dollars lifts us above Greece to second-last place. Though, the original COVID-19 JobSeeker supplement incrementally lifted the unemployed for the first time, above the Henderson poverty line.

Paying such low levels “under the false pretence of encouraging more unemployed Australians to look for jobs” has no evidentiary basis. The international market demonstrates it has the opposite effect. Higher unemployment payments internationally are more often correlated with lower unemployment rates. More money flowing into JobSeeker generates spending in the economy and drives demand.

Despite the Coalition undercutting higher education, Minister Michaelia Cash supported the idea that after six months on JobSeeker, recipients should undergo training to help them get a job. Department of Employment figures show the smallest job market in January were for unskilled labourers (8.1%), sales workers (7.7%), machinery operators and drivers (5.9%).

This collection of low skilled jobs (37,975) are in rare supply in the Australian economy. Therefore, any JobSeeker training to elevate them to the skill level needed to widen their prospects would require extensive TAFE and university level education; well beyond approved, intensive short courses.

These were not the only changes Morrison implemented to the welfare system. The Australian article also reported:

'Under a raft of welfare reforms, Employment Minister Michaelia Cash said employers would be able to dob in unemployed Aussies who don’t take up jobs they are offered.'

Even business groups denounced this move, let alone the welfare groups and unions. Social media references to “Dob in a bludger!” accompanied curiosity as to the probability of the Government establishing a hotline for "dobbing in a wage thief" for businesses that were 'accidentally underpaying workers'.

Get off the couch, the Coalition says

The prevalent attitude towards the unemployed by politicians suggests that the unemployed are lazy and distracted by Netflix as Nationals Leader Michael McCormack claimed, or on drugs as Attorney-General Christian Porter claimed when Social Services Minister.

Several Federal ministers like David Littleproud and Michaelia Cash attacked the unemployed, demanding they “get off the couch" and get farmhand jobs that Australians discovered were not available. Others would suggest this patronising attack on people who, because of a recession and the pandemic are without work, is unfair. These Federal ministers all would have us believe jobs are plentiful.

They are not alone in spouting propaganda that jobs are readily available. Minister for Families and Social Services, Anne Ruston, in a Triple J Hack interview with Avani Dias on 23 February, repeated the fallacious claim. That there are “plenty of jobs” in her region.

This was demonstrably wrong. Based in Renmark, her territory in the Murray had 8,364 people searching for work in January 2021 but only 626 job vacancies. This is 13 times less than the people looking for work. 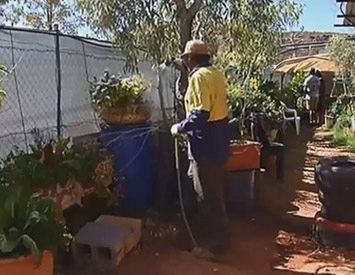 Work for the dole — a punishing reality for jobseekers

While the Work for the Dole program has good intentions, it is laden with problems rendering it ineffective, writes Tarric Brooker.

Where are all the jobs?

It isn’t easy to be finding a job in this economy, as reflected by any measure or methodology:

There are 245,400 jobs vacant according to the Australian Bureau of Statistics (ABS), while Seek says there are 182,793 available jobs.

Yet there are many unemployed registered by JobSeeker, approximately 1,236,000 people, the ABS, which states there are 877,600 people out of work and Roy Morgan, which suggests there are 1,680,000 people who are unemployed (these stats are current as of January 2021).

This demonstrates that there are far more unemployed than available jobs.

The difference between ABS and Roy Morgan’s stats are considerable, and while the Government and mainstream media lean heavily on the ABS measure, we should appreciate what it represents. The ABS’s shortcomings arise from its:

Roy Morgan shows in January 2021 that unemployment is 1.68 million people. Adding underemployment to that, it reaches 3,118,000 million souls looking for a decent job.

Meanwhile, the Department of Employment’s job vacancy report for January reveals that over three million people in Australia are competing for 175,100 jobs. Nearly 18 people for every job advertised and we are not even beginning to deal with the logistic issues of job searching. 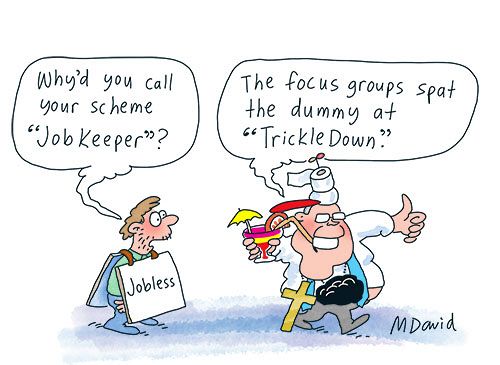 As Jobkeeper, JobSeeker and other stimulus measures are wound back, it is doubtful the Morrison Government will rise to the economic challenges ahead.

Beyond Australia’s 19 cities there are 1,700 towns with populations between that and a thousand people. Spreading 175,100 jobs across a continent representing 5% of the Earth’s landmass, when the towns are dominantly coastal, represents the first challenge to job seekers. An average for any given town would tell you that more than 100 jobs in a given population centre mean you are probably living in a city.

This might mean less than ten jobs advertised in that region will be for unskilled labour. That’s not a nuanced presumption, as industry and commercial activity vary considerably from place to place. Still, one might understand that the absence of jobs in their area has to be one of the most considerable obstacles for the unemployed.

The Government announced on 23 of February that:

'... job seekers will be required to search for a minimum of 15 jobs a month from early April, increasing to 20 jobs per month from the 1st of July.'

Considering the number of unemployed people on JobSeeker generating 15 applications per month will create 18 million applications and has the potential to cover every advertised job in Australia 105 times until July, when it will be 141 times that.

Limitations to employment are locality and factors such as job requirements for education, competition for work, financial burdens, physical or mental impediments, security clearances, pay awards not commensurate with needs and employment discrimination.

Nobody in the Coalition Government is prepared to concede they are failing the unemployed. The party of “jobs and growth” has in reality been expanding unemployment and recession for years. No policy the Government has implemented seems capable of changing that path.