John Maycock follows up on his investigation into the plight of the jobless with Christian Porter taking the 'loophole baton' from Michaelia Cash to continue the attack on the unemployed.

IT IS only a few weeks since this author discussed Michaelia Cash’s vexatious attacks on the unemployed — based on an article in the Daily Telegraph (DT) and the Courier Mail (CM). Both these papers were at it again (26/4), but with a different minister wielding the stick at a slightly different target.

Although it is the CM print edition that takes the cake with this front page “screamer”:

‘Revealed: The welfare rort that’s sweeping the nation. SHIRK FOR THE DOLE.’

Saying all people on welfare are lazy is irresponsible, @acoss says of daily tele story on dole bludgers #auspol pic.twitter.com/du3NigOQKc

Readers of that previous article will be aware of what was said about headlines, vexatious labelling, emotive language and such, so here is how their latest article kicks off:

MORE than 70,000 dole bludgers are exploiting a medical loophole to avoid having to get a job by claiming they are too sick to work.

An investigation by the Department of Human Services has uncovered what the Turnbull government believes is widespread rorting of the medical loophole by some dole bludgers, as well as unscrupulous GPs.

(widespread… by some… Would that be an oxymoron or such?)

If ever there was a loaded sentence that is it: investigation, uncovered, widespread rorting, medical loophole, dole bludgers, unscrupulous GPs.

It needs to be said from the outset that they are not avoiding getting a job — there are no jobs. They are being made exempt from job search requirements. Two very different things. While the exemptions are due to medical issues not to a medical loophole — though this is how the DT puts it:

Even when reporting the types of medical conditions they can’t help themselves:

‘…conditions that are used to avoid working include depression, anxiety, muscular-skeletal problems….’

And of course there is the obligatory allusion to doctor shopping:

‘…authorities now suspect that scammers are shopping around for medical certificates.’

Consider in that previous article I showed how Michaelia Cash appeared to be misrepresenting genuine Centrelink exemptions as loopholes while “selling” it with labelling language, I had this to say:

‘…these waivers, that Cash calls "loopholes" that allow people to turn down jobs, would surely be things like travelling times, lack of transport/isolated areas, unsuitable hours due to carer responsibilities and such.’

It appears that we now have Christian Porter carrying the “loophole baton”, and this time it is the unemployed with medical issues who are being “bashed”. But not only that, it was also shown that Cash was pushing to have “tougher new penalties” passed and calling for a “crackdown” on those exploiting her so called loopholes —and now there is this:

‘Human Services Minister Christian Porter has ordered an immediate crackdown on the dole scammers — and has also threatened legislation to deal with the rorting.’

There is a pattern developing here. Any rules or regulations they want changed are described as loopholes, while those who come under the guide lines of those rules are labelled as rorters, bludgers, or such. In this case, even doctors can’t be trusted, medical certificates are meaningless, and the legislation that gives exemption on medical grounds is a loophole.

‘They are all welfare recipients who are deemed not to be sick enough to receive the Disability Support Pension.’

These must be either people who have been downgraded from the Disability Support Pension (DSP) or have had a DSP application declined — both instances of people who have barriers to employment but fall below the eligibility criteria now set for the DSP.  But never fear, Porter has a possible solution:

‘One option being considered is using government doctors to assess people’s fitness to find work, as was done with the Disability Support Pension.’

Funding #NDIS by taking $ from DSP and other pensioners is devious and cowardly @cporterwa #Budget2016 https://t.co/RJnf0EYPmo

But hang on — if these people are “refugees” from the DSP, haven’t they already seen the so-called doctor? I doubt this, as it seems that it is not doctors who are re-assessing DSP recipients, or assessing new claimants. Mostly, people are being knocked back or off the DSP through new criteria introduced last year after the release of the McClure report. One such change is that the impairment has to be expected to last five years or more, up from two years and, in any case, it doesn’t appear to be the doctor who makes the final decision, it is the Centrelink assessors using “impairment tables” and other guidelines.

Indeed, it seems to me that government claims that people are being assessed by a government doctor are more than likely not quite true — or at the least it is certainly nowhere near to the degree implied. Consider also the probability that the assessors have been “given incentive” to be “less-charitable” in their interpretations of guidelines and tables, and that those guidelines and tables have been “tightened up” — and there is your answer: the government has shifted the goal posts.

Now there is much that could be said on this matter. The fine line between notions of disabled and the plight of the unemployable, the jobseekers versus vacancies figures and the detrimental affects that being thrown into the “unemployed hunger games” can have on people who are “less than firm”. Consider for example what disability rights activist and comedian, Stella Young, had to say:

‘Concepts such as "permanent disability" and "fitness for work" are complicated and nuanced.’

However there is something more relevant to the government’s ongoing vexatious discourse on welfare recipients going on here. The other purpose of the CM/DT article is to point out that some areas have a higher ratio of people on doctor’s certificates than others. They declare that on average:

‘…almost 8 per cent of all… payment recipients use GP medical certificates to get around mandatory jobseeking requirements.’ 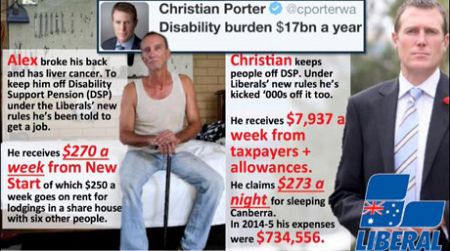 These areas, along with others, are the:

‘…“hotspot” suburbs and regions where authorities now suspect that scammers are shopping around for medical certificates.’

On this matter, Porter has this to say:

‘I will not accept one urban suburb has eight times more illness than another….

…it is not reasonable to accept that some regions have eight times more people that have… severe anxiety or depression….’

And here Porter is being less than honest. For starters, he is playing the common sense card. “Will not accept” it because common sense says “it is not reasonable”. Well, that is how he wants the reader to “hear” it. Not forgetting he provided an answer — they are all bludging rorting scammers, and of course common sense would also suggest such.

Christian Porter: Stop use of cages and coffin-like boxes for people with disability in Australia ... https://t.co/14ijr6VuWS via @ChangeAUS

But that is just his “dog whistle”. His dishonesty is in claiming to not understand how such disparity could exist. To put that another way, if he doesn’t understand, he has no right to be where he is.

In fact according to research on socioeconomic status (SES) it is absolutely reasonable to expect that some areas will have higher numbers of people with issues than other areas. It is the health inequity inherent in wealth inequity and it is well known that people on the lowest SES are often forced into crowded cheaper areas — public housing, outer/less desirable suburbs and such. And the readers that Porter was appealing to should know this instinctively — if they don’t live in one of those poorer areas they certainly know about them.

Now here is the rub, Porter has to know this. According to his web site:

There is no way he can have studied across those fields and not met up with the issues inherent in SES. But this is more than just a lie by omission. He suggested that there was another reason for it by putting vulnerable people in the firing line.

So now Porter can stand proud with the rest of his peers with this one, not just for blatantly spreading dis-information and discord in the public domain in their ongoing “war on welfare” but also with his “denial” of his own understanding when singing from the LNP song book.

Indeed, it is bad enough when people who know no better are spreading un-informed notions, but when a highly educated member of parliament deliberately drives such notions, it is time to question that member’s intentions and principles!

Christian Porter taking tips from his UK Tory brothers on how to reduce the "disability burden"? #auspol #ausvotes pic.twitter.com/ecBTIXOcpw

Is ostracising the unemployed part of your #ideasboom, Senator Cash? https://t.co/zG32UqsKZ7 @IndependentAus