A 2014 BUDGET proposal to remove six months of unemployment benefits, amongst other cuts, was the carefully considered resolution to our “economic debt crisis”.

But this scheme was widely rejected by the public, alternative media, professional agencies and the Senate.

These were the unemployed "dole bludgers", the welfare cheats and later on, the "double dippers", who were the malignant sore on the face of civil society that needed to be lanced. So it was a mystery to conservatives that anyone wished to preserve or subsidise this lowly contingent of “un-people”, especially when there were mining companies clamouring for continued subsidies.

Unemployment under the Coalition, accelerated and coasted at around six per cent of the Australian workforce, according to the ABS and mainstream media. The Liberal Party claimed to be creating jobs while these "bludgers" were just not taking them up. These recalcitrants, apparently, wouldn’t attend appointments with the private enterprise employment agencies who do everything in their power to find them jobs.

So Malcolm Turnbull devised an appropriate punishment. On the spot fines for failure to comply with the directions of these agencies, in relation to appointments, behaviour or training. Of course, should appeals lodged against these fines find them unjustly applied, then the job seeker would eventually be reimbursed after four months.

The truth about jobs in Australia — that you won't read in the newspapers. By Alan Austin. @alantheamazing https://t.co/Qp3nzgrUV6

This new disciplinary power rewards employment agencies for their “exemplary services” in spite of these "malingerers”. These are the same agencies depicted by the Four Corners expose “The Job Game” in February last year. The federal government decided, after recovering $41M worth of false claims by these agencies following that report, that these were the most trustworthy organisations to enforce penalties on the unemployed. Perhaps you are beginning to suspect that there is something that is not quite kosher with the attitudes indicated above.

First off, let’s examine the veracity of the claim that six per cent is our unemployment rate. Not only have these statistics been rubbished by a former head of ABS as “not worth the paper they are written on“ but they have also been criticised by Steve Keen in the The Australian.

'The ABS uses the internationally sanctioned definition of unemployment, which is similar to Tom Waits’ definition of being drunk: you have to be really, really out of it to qualify. Not only must you not be in employment but you can’t have done even one hour of paid or unpaid work in the four weeks prior to the survey. Nor can you be discouraged by the absence of available jobs either – you must have applied for something in the previous four weeks – and you must be available to start immediately.' 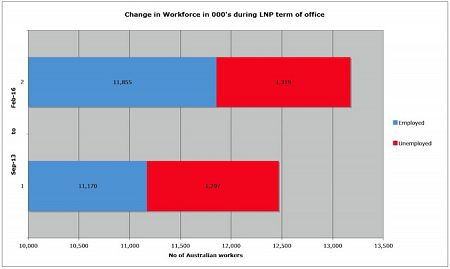 A reflection of numerous factors including a population growth of 1.75%, and a net migration growth of over one per cent. (These add approximately 400K and 200K per year to the population respectively). Other factors include the growing propensity for later retirement. Each time the share market drops, diminished returns for superannuation funds which directly impacts the capacity for those returns to fund people’s retirement capacity, results in an increasing tendency to remain in the workforce beyond retirement age.

Add the rising numbers of women entering the workforce. Add the single parents and the disabled, people reassigned to Newstart and expected to look for work despite their obvious disenfranchisement. Let’s not forget, each year Australia has about 300K school leavers, many of whom become new entrants into the workforce. These school and university graduates eventually enter the workforce via traineeships, apprenticeships, a job or the unemployment line. 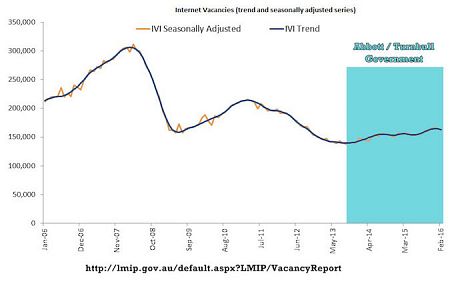 Thwarting all their efforts to be employed is the pitifully small numbers of job vacancies within Australia. ANZ's survey of newspaper and Internet ads for February noted a 1.2% decrease to 154,748. The Department of Employment’s Internet Vacancy Index (IVI) noted a decrease of 4000 jobs to 163,000 in February. The Index does not include the declining number of newspaper ads or limited copy ads employers may put on shop windows or their own websites.

The ABC reported in January that

' ... newspaper ads rose 0.4 per cent last month, but now make up less than five per cent of employment advertising.”

Let’s be as generous as possible to our government in assessing the number of jobs the Australian market has – therefore ignoring ANZ Bank’s smaller estimate – and add around five per cent to their vacancy index. That makes a generous estimate of 171,000 vacancies available to 1.3 million unemployed (or nearly 2.48 million if you add the underemployed).

Yet, the opinion of the Minister for Employment Michaelia Cash is that there are jobs for Australians to find.

Numbers, of course, never tell the whole story as they also require consideration for issues about locality and accessibility limitations, skill & education levels, competition, financial limits, literacy, and the arbitrary selection processes and criteria of employers. NSW and Victoria supply 64% of all Australian job vacancies.

You certainly don’t want to be looking for jobs in Tasmania, the Northern Territory, ACT or South Australia, in which the combined percentage of vacancies do not reach double figure percentages for the Australian Market, which is only 9% in total. Skills and Education levels in Australia are been eroded by the fall off of trade apprenticeships, and the growing expenses inherent in TAFE qualifications and University costs.

Other factors for which I have not made adjustments, are the issues around foreign workers with rights to work in Australia. In May 2015, the Sydney Morning Herald reported that there were 167,000 457 visa workers and, that the 1.2 million foreigners who have work rights include 160,000 with working holiday visas, or more than 623,000 New Zealand special visa holders.

To be fair to the government, the number of 457 visa holders has dropped to just over 100,000, although that is officially only the number of direct visa holders and does not include accompanying families. It is not that all these people are competing for the jobs available to Australians but that they can — and of course, many do. Companies claim to bring in foreigners on 457 visas because of the absence of appropriate skills in this country. What does that therefore say about the level of education we provide or our commitment to education?

Even for the ABS statistics of the absolutely undeniably unemployed, there are five people for every vacancy. For the more realistic Roy Morgan numbers of merely unemployed, there is an 8:1 ratio. Add in the underemployed and the ration becomes 14:1. Add in the 1.2 million foreigners with work rights and your competition for work becomes a ratio of 21:1.

Now, given some 1.3 million under current government requirements have to write 20 letters a month to retain “below poverty line unemployment” benefits. That's at least 154 letter on average, per month. Any number of applications will be dependent on a given vacancy's attractiveness to foreign workers including 457 visa workers or underemployed and employed “drifters” (fully employed people who would like to change jobs).

In reality,this will vary due to local accessibility, skills and education required, so some employers would receive less applications and some more.

Me hosting a panel of unemployed workers sharing their stories - the human cost of Turnbull's TOTAL failure on jobs.https://t.co/9KvKhKUotJ

Finding work is limited by finance, access to transport, time constraints from having to “work” for the dole or do irrelevant training and paperwork. Live in the wrong State, have the wrong or limited financial access to education, be unable to afford sufficient levels of social connectivity, digital literacy, access to health services, transport, housing, clothing and kiss any job prospects goodbye. Especially limiting is the unemployment “wages” that are $391 below the international poverty line.

On top of that, the mainstream media goes out of their way to find someone who looks as though they are not actively searching for work and labeling them as “dole bludgers” on the front page of a newspaper or on a current affairs program. This effectively extends that label with no justification to nearly a fifth of Australia’s workforce. That 18.8% of the workforce constitutes a workforce that probably lives below or close to the poverty line which has some correlation to a Australian Council of Social Services (ACOSS) report that over 2.5M Australians live in poverty.

Following an attack by the media, or being treated disparagingly and/or having been fined by the people who are supposed to be helping them find jobs (that don’t statistically exist) and having to “work for the dole” to be paid at a level far below the poverty line, what can their level of psychological resilience be?

Telling someone to “get a job” as though it was simple, expresses an opinion. It reflects ignorance of the facts in the numbers of jobs available and the vastly larger numbers of people competing for them and the sociological issues associated in becoming employed.

So are the Liberal Party policies facilitating jobs creation in Australia? In an Independent Australia report, Alan Austin questioned the Coalition’s take on unemployment in February, referencing Scott Morrison’s claim that Australia had generated more than 300,000 jobs since the coalition was elected. Alan focused on ABS figures pointing out numerous flaws in the Coalition's numbers. What, though, are the numbers from the Roy Morgan perspective? It would appear 300,000 jobs generated grows to 685,000 jobs since September 2013.

Looking so much better that you would have to wonder why the government only uses ABS’s figures, until you look at the larger realistic unemployment numbers. 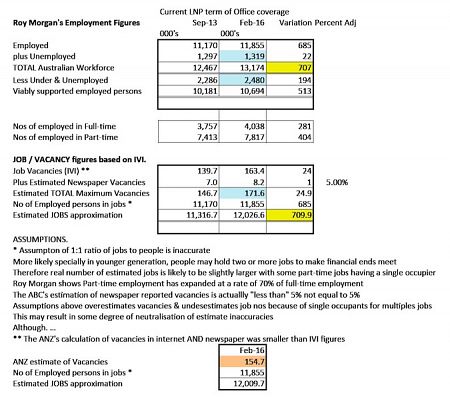 It is, however, the Department of Employment’s Vacancy Report that has shown relatively slow marginal growth in job vacancies of only 23,600 over the full LNP term of office. Keep in mind that net unemployment only (using Roy Morgan figures), has increased by 22,000 and net participation has grown by 707,000 during the Coalition's period in government.

With such a small rise in vacancies, it becomes concerning that no matter which statistics, either those of the ABS or Roy Morgan Research, it is evident that job growth is only just keeping ahead of growth in workforce participation. The net change of growth of jobs (vacancies plus occupied jobs) 709,900 with the total workforce change 707,000 (highlighted in yellow in the spreadsheet) suggest the market is only just keeping its head above the rising water of workforce population growth by 2,900 jobs in three years.

If we used ANZ’s vacancy numbers, then we would be drowning by 14,000 jobs. Either way you look at it, if Australia fails to maintain a better margin in job growth, then the workforce participation growth would overtake jobs and unemployment will skyrocket.

As a country, we had better hope there are no futher major job losses on the horizon. At best, this country is just treading water in a desperate dog paddle to stay afloat and at worst, we are peering over a chasm into a very deep valley and an economy about to collapse into recession.

Is ostracising the unemployed part of your #ideasboom, Senator Cash? https://t.co/DMKMvObmyz

The ATO offshoring jobs is the same as business offshoring profits https://t.co/L2qj4Eno7B @IndependentAus

@Michtull @unionsaustralia @GetUp more with less seems to be catchphrase of lib governments.