The Coalition's catch phrases are all about creating more and better jobs for Australians — but how good is its record really? John Haly looks at the numbers.

The Turnbull Goverment, which has cut penalty rates, public services and taxes for corporations, have come up with a slogan to replace “Jobs and growth”. The new mantra is: “Let’s keep Australia working”.

The implication being a vote for Labor is a vote against your job. The question we need to ask is: “Has the liberal agenda succeeded in keeping Australia working or are job numbers declining and wages diminishing?”

That may sound convincing and consistent. Of course, as other authors, such as Alan Austin, note: it is all a matter of strategically timing your announcement so the figures fit your case. Such as choosing a month where historically low employment featured the previous year to be compared with a better statistic this year. A slightly different choice of month or period may produce a different result. Statistical variations depend on the accuracy of the collection methods, such as the underlying definitions of employment and what dates are being compared. The ABS statistical methods for employment issues have come under considerable criticism, even from within its ranks. The ABS, however, does not engage in any statistical tampering or deception on behalf of the government. ABS methodology follows the ILO international protocols for measuring unemployment, although its methodology does have some faults. 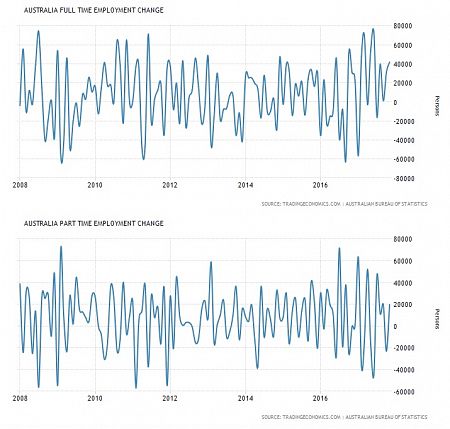 Highly changeable variations in part and full-time employment in Australia

Monthly deviations in full-time employment and part-time employment are significant and cherry picking dates can be misleading. Depending on what is your starting and ending point, you can show either rising or falling employment. What is notable is the increasing volatility in employment markets over the years.

So, are there alternative measures which use alternative criteria for measuring employment? Roy Morgan’s measurements are considerably more modest than the ABS stats Michaelia Cash and Malcolm Turnbull referenced. Their numbers for the November 2017 report show long-term job expansion is in part-time jobs, with declining full-time jobs. The figures provided show that full-time employment decreased 31,000 in the last year until November, whereas part-time employment rose by 70,000. 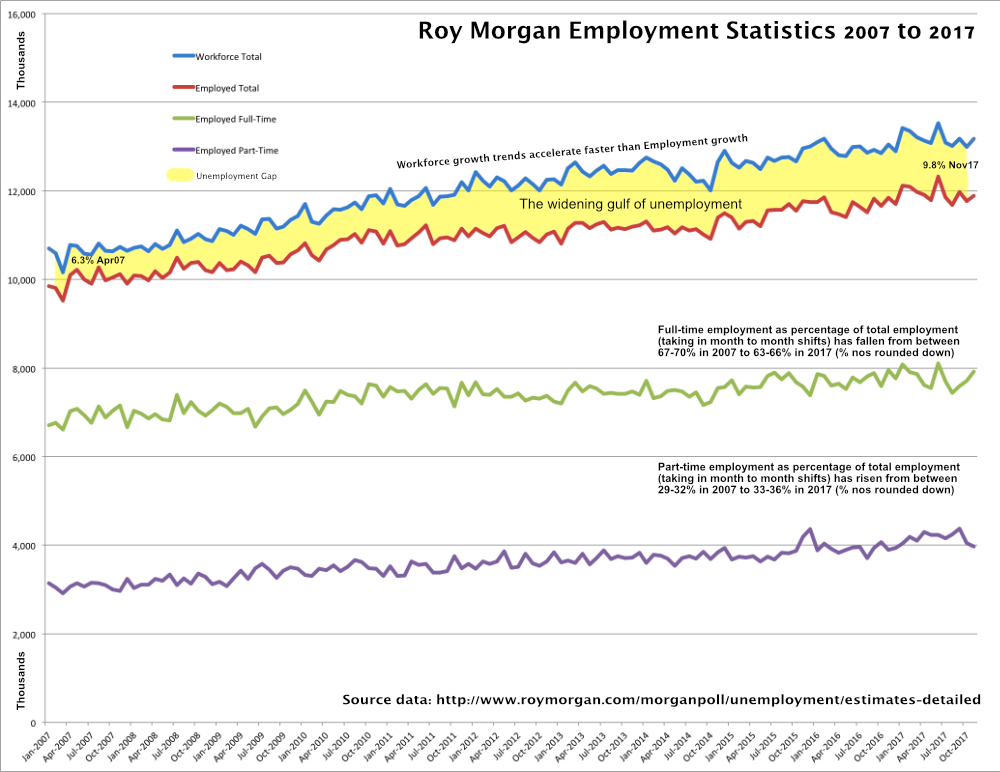 Roy Morgan’s measurements for employment and unemployment differs considerably to the ABS’s methodology, although its agrees that part-time and full-time employment is volatile. Morgan shows that part-time employment is growing faster than full-time as the job market is becoming increasingly casualised — a point even the RBA agrees with. Graphing these statistics over the last ten year shows a clear trend, which the ABS methodology obscures, while Roy Morgan’s method makes it easier to track. This methodology is also notable for tracking under-employment, or what the ABS calls “hidden unemployment”. 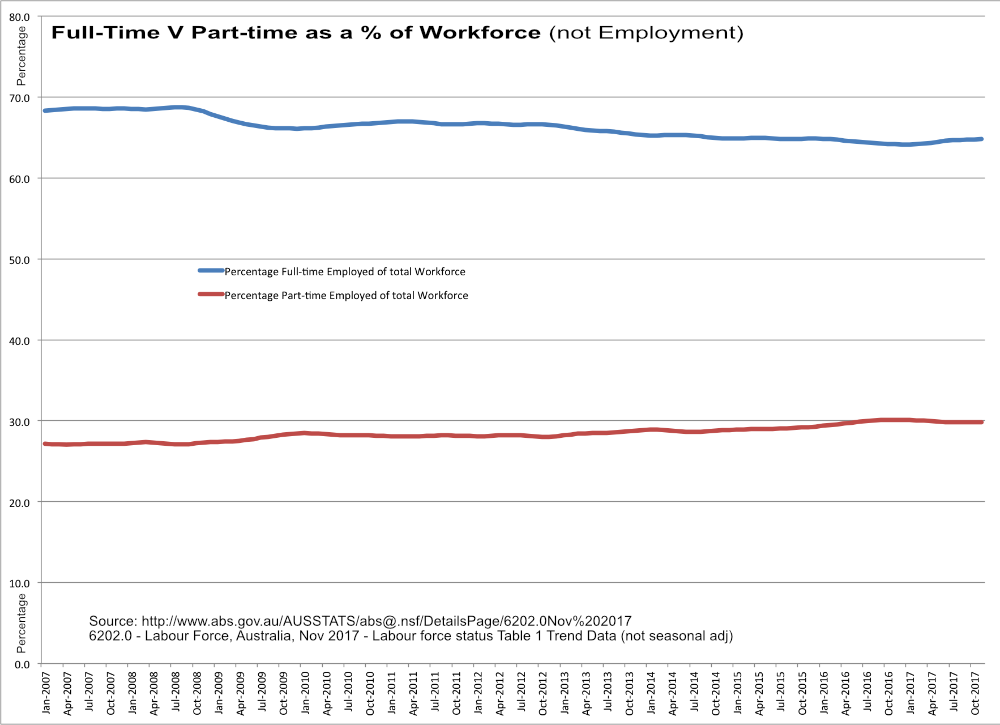 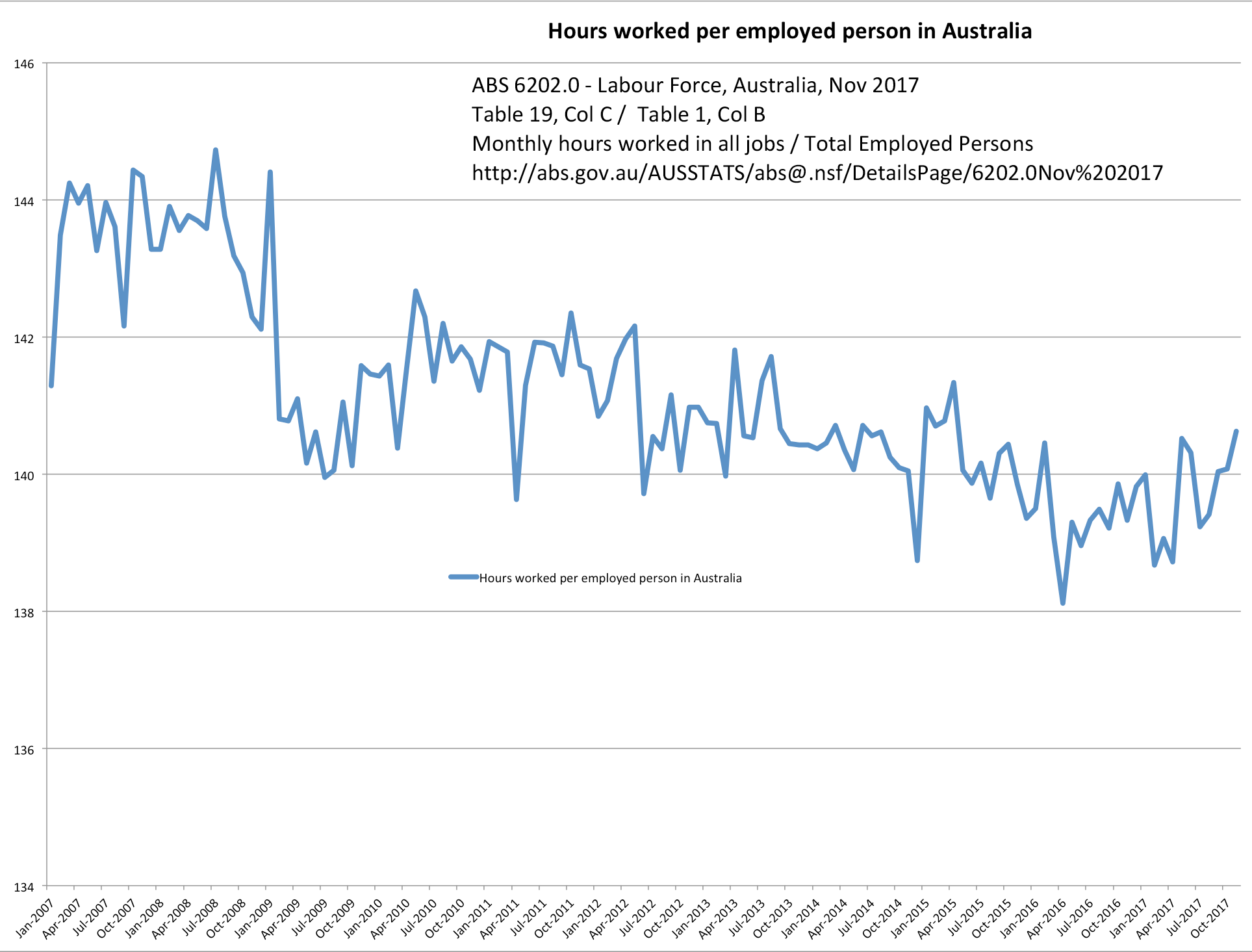 Hours of work available for the employed is declining

But what about the hours worked by those who are employed? It would seem self-evident that if part-time work was rising faster than full-time, that hours worked would be reducing, which has long been the thesis of writers such as Alan Austin.

I took a slightly different track with ABS data and charted hours worked as a function of just those employed, rather than demonstrating, as Austin does, that working hours available for the adult population is decreasing. No matter which way you look at it, it is evident that adequate working hours are less accessible both to employed and unemployed.

Job vacancies in comparison to unemployed job seekers have also been rising. While there has been a soft rise in vacancies available over time – since the Coalition came into power – it has been far below any measure of unemployed numbers (no matter the method). The job vacancy rate for the nation from the Government’s IVI (internet vacancy index) for November 2017 was 177,900. In the four years of the Abbott-Turnbull Governments, it has never risen above 180,000 and has been as low as 150,000.

Of course, not all vacancies (although most) are advertised online.

The ANZ Bank, however, regularly tracks job advertisements, saying of the most recent figures:

'Job ads growth was 3.7 per cent year-on-year in December, a steep fall from 6 per cent in November. In trend terms, the numbers looked a bit better at 4.7 percent year-on-year, but this was down sharply from 9.4 percent annual growth in early 2016.'

Fortunately, Trading Economics has already factored in these adjustments, reporting: 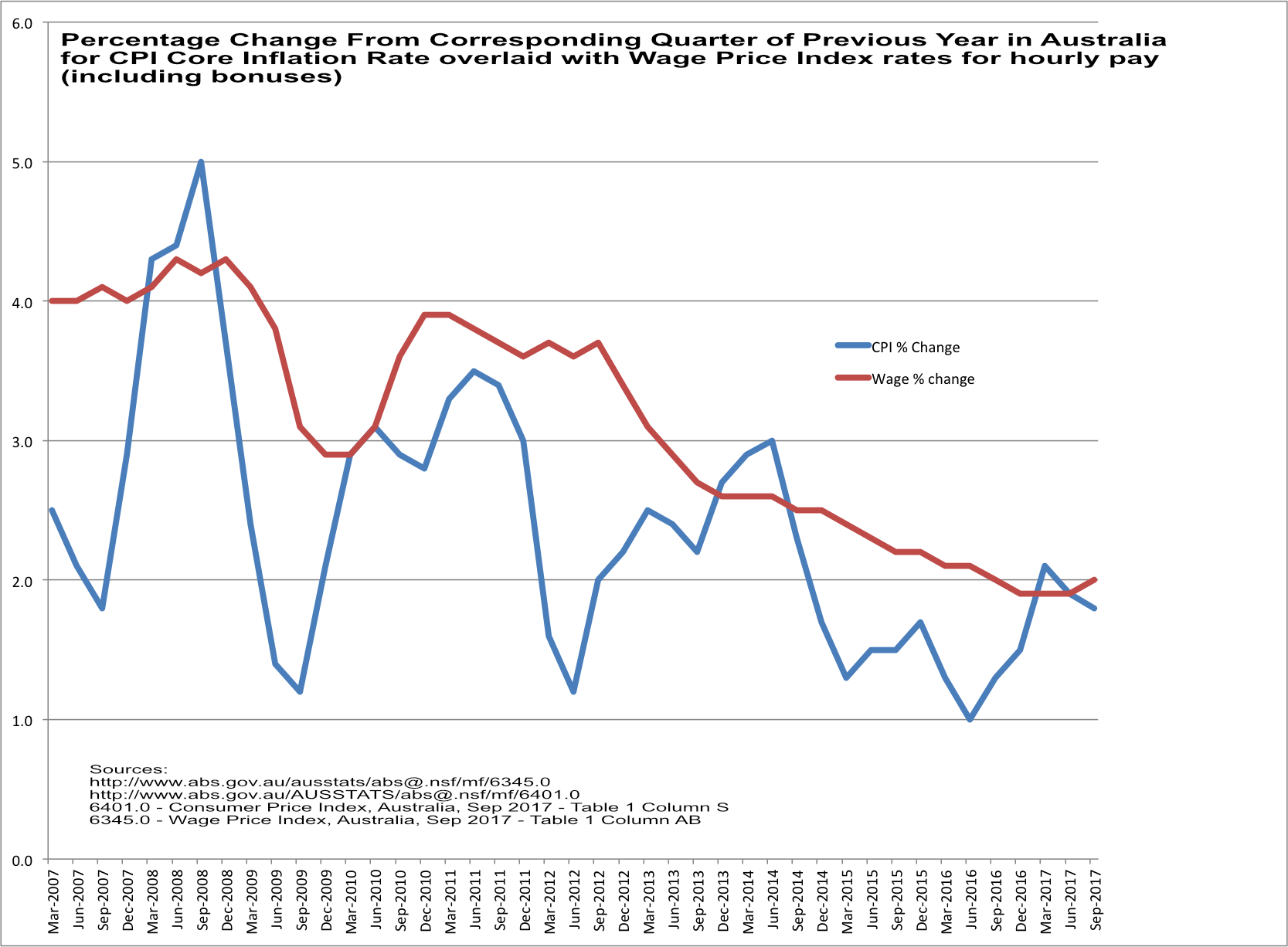 Well, at least the employed get paid, you may say. Unfortunately, there the news gets worse.

Wage rate growth continues to stagnate to levels unseen in this century — down as far as 1.9% in the previous quarter. While there is still growth, the question needs to be: Is the growth rate keeping up with that of the CPI (consumer price index? The answer on the surface is “barely”. ABS statistics graphed here show that it is only just keeping its head above water. The CPI is widely criticised for “excluding home purchase costs“. In a country where private debt towers over GDP by 122% and housing affordability limits access to homes, this is a significant omission.

“The ABS does produce cost of living indices, which consider the cost of living according to your source of income – wage, pension, or government benefits“, states the Guardian’s Greg Jericho. Once you add the real cost of living factors,one quickly realises that wages are not keeping up with the actual costs of living.

Job losses for specific industries under the instigation of the coalition will have long-term consequences for our economy.

Some of these include:

Claims by the Turnbull Government that their success in managing an economy that has produced employment are highly questionable and lack substance. Whatever the Coalition is doing, it is most certainly not keeping Australia working.

And this is the Jobs and Growth government that wants to "Keep Australia working" according to Malcolm's new slogan?https://t.co/WjxInDsXLV
Why #auspol do we keep electing these idiots? https://t.co/vAv05hX8yf

5 October 2020, 11:00am Conservative LNP senators and journalists have been perpetuating the idea that ...
Join the conversation
comments powered by Disqus
News updates