Koala wipe out: Government apathy and the STD killing our national icon

Koalas are in big trouble with disease now rampant in wild populations.

Dr Michael Pyne, head veterinarian at Currumbin Wildlife Hospital, says that one-third of Australia’s koalas have been lost over the last two decades, largely due to the spread of chlamydia, which now affects between 50 and 100% of wild populations.

Let’s put animal suffering in perspective. Chlamydial infections can be extremely painful and koalas cry when they’re in pain. Tears don’t roll down their faces, but they cry out and hunch up. At Currumbin, the first thing vets do is give pain relief before any other treatment. In the last year, some 461 koalas were admitted to the hospital — three quarters had chlamydia.

“I’ve been at the hospital for 18 years. If we go back 10 years, we admitted 28 koalas. Now we’re seeing a massive increase.”

About 80% of koalas treated at the wildlife hospital have some form of the disease. Chlamydia causes painful urinary tract inflammation, infertility and blindness. As well, koalas are suffering from a retrovirus which leaves infected koalas more susceptible to infectious diseases and cancers. Chlamydia affects the reproductive tract. Koalas can recover but will be sterile, creating a massive problem for the population.

'Loss of suitable koala habitat remains the most significant threat to the ... survival of the species'

According to Dr Pyne:

“We’re seeing different strains and new research is showing some strains are more aggressive than others, suppressing the immune system. Chlamydia is a nasty bacterial infection, combined with the retrovirus we have a perfect storm of diseases."

The problem is compounded, says Dr Pyne, because:

It’s often very difficult to spot when a koala is sick. When they’re on the ground, the animals are usually very sick, often with renal failure. By then it’s usually too late.

We have a fairly urgent situation: big numbers of koalas are struggling; a lot of koalas are now unable to breed any more. We don’t know how many are fertile, how many have sub-clinical chlamydia. It’s quite a frightening situation when you’re dealing with this disease.

If we didn’t have this disease, koalas wouldn’t be so vulnerable. I’m sure we’re just seeing the tip of the iceberg.

It costs around $7,000 to treat a koala. If they recover from the infection, koalas need to be kept in hospital for approximately six-eight weeks. One of the major problems is keeping up a supply of suitable eucalypt leaves — a situation which can be exacerbated as koalas from different areas favour different eucalypt species as their primary diet. 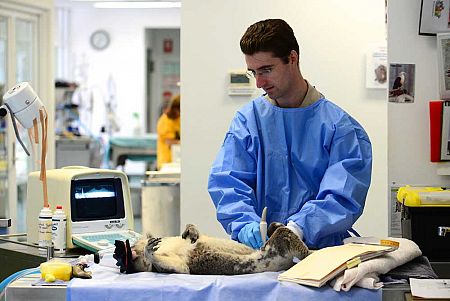 Results from the six-year study from 2009-2014 indicated that 10,139 koalas were admitted to the four wildlife hospitals. More than 80% were adult. The data indicated that more than half the koalas were admitted for a “medical condition” of which 12% had been diagnosed as “chlamydiosis”. However, 40% of the other medical condition admissions comprised undiagnosed conditions, and many of these may have involved chlamydia which cannot be confirmed because of a lack of detailed medical records.

Almost two thirds (65.5%) which came into care were either euthanised or died. Only 27% were able to be released. In total, 3,437 koalas were euthanised by the four wildlife hospitals.

In NSW, according to the study, 20% of admissions to the Port Macquarie Koala Hospital in NSW were due to clinical signs of chlamydiosis including conjunctivitis and cystitis. Michael Pyne believes that most Victorian and South Australian koalas have depressed immune systems.

Whilst Michael Pyne and other vets and some scientists suggest that a vaccine against chlamydia is part of the solution, a program would require massive amounts of funds and intensive management of koalas. Some areas have a high incidence of chlamydia and in some areas, koalas appear genetically stronger. “A lot more research needs to be undertaken,” says Dr Pyne. 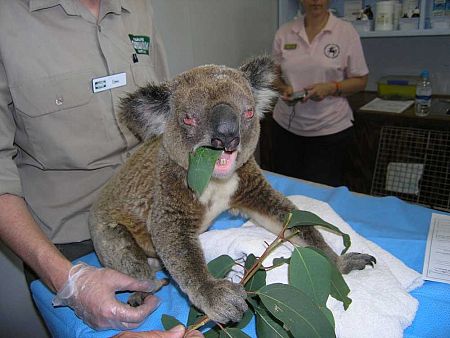 Koala with chlamydia, which has caused blindness and conjunctivitis (photo: supplied).

Researchers who undertook the six-year study acknowledged that

'loss of suitable koala habitat remains the most significant threat to the continued survival of the species across all parts of its original range leaving the animal particularly susceptible due to its specialist folivore diet of eucalyptus leaves.'

There are big changes happening for Queensland koalas. More people are living on the Gold Coast, with massive developments requiring more habitat destruction and the proposed light rail through critical koala habitat. Queensland Government data details an 80% loss of habitat in southeast Queensland with no let-up in the ongoing destruction.

Whilst Dr Pyne believes that habitat loss is only a part of the threats to koala survival.

“the underlying or ultimate cause of mortality is the continuing destruction and fragmentation of Koala habitat.”

He describes the hypothesis that disease and infection is the primary cause of the catastrophic loss of koalas as "medicalising an ecological issue".

Professor Carrick quotes from a recent paper published in the journal, Conservation Letters, on the significance of endemic disease:

There are multiple causes of koala decline including drought, habitat destruction and disease. Well-designed experiments, linked to appropriate models, are necessary to determine the true role of infectious disease in the current koala population declines and whether a focus on disease is likely to be a feasible, let alone the most cost-effective, means of preventing further declines.

This is shocking a mass killing of koalas. Pacific Highway Koala holocaust. https://t.co/IOGF0i7AtK

I have seen no reports of the only certain way of knowing whether a putative vaccine works — a proper double blind challenge trial would be required. It should be noted that despite the expenditure of many millions of dollars and a huge amount of international research effort over the best part of half a century, there is still no vaccine available to prevent human chlamydial infections.

Chlamydial disease is one of a number of factors potentially driving koala population declines. In coastal areas of New South Wales and Queensland, habitat destruction associated with urbanisation and concomitant increases in dog attacks and road-kill are substantial contributing factors to decline.

It could be argued that identifying chlamydial disease as the key factor in declines allows policymakers to avoid dealing with the more financially and politically costly problem of managing urban development. Nevertheless, conservation of koalas is likely to require addressing multiple drivers of decline, including disease.

Meantime, Currumbin Wildlife Hospital urgently needs volunteer carers. Not for koalas as they require specialised care but for birds, marsupials and the multiplicity of wildlife species that come into care. People willing to volunteer are urged to contact the hospital for further details.