Bring on the Republic of Queensland

This weekend saw the 90th birthday celebrations for Queen Elizabeth II in Britain. Out here in the antipodes we have a public holiday in all states except WA and for the first time, there will no longer be a holiday today for the Queen in the state named after her. History editor, Dr Glenn Davies delves into this change.

AS I wrote last year, Queensland was to become a little less "Queenie" with the proposed move by the State Government of the Queen’s Birthday holiday from the second Monday in June to the first Monday in October in 2016.

In Britain, the Queen’s Birthday is celebrated on the first Saturday in June. In New Zealand it’s the first Monday in June and in Canada it’s in the middle of May. The Canadian celebration is called Victoria Day because it was created to honour Queen Victoria. However, over the years the Canadian holiday has changed to include the reigning sovereign’s birthday as well.

The Royals were all there at the service on Friday, 10 June 2016 at St Paul’s Cathedral. It is a busy affair this year. First the service at St Paul's Cathedral, then on Saturday the Trooping the Colour ceremony, followed by a street party on The Mall on Sunday.

#QueenElizabeth holds a torch as part of the #QueensBirthday celebrations, in #Windsor #Britain #Queenat90 pic.twitter.com/QyYWKx9zIn

The idea of two birthday celebrations was introduced 250 years ago. Earl Charles Spencer, brother of the late Princess Diana, recently stated the Queen is getting a second multiday celebration now thanks to historical tradition. As Spencer said,

George II was ‘born in the depths of winter, and they decided they couldn't celebrate his birthday in the winter every year because there's all sorts of pageantry.’ So George decided he'd have a second birthday, and the idea stuck. ‘Anyone who's been King or Queen of England since has a summer birthday, so that we have a hope of some sunshine’.

Since 1748, the monarch's official birthday has been marked by the parade known as Trooping the Colour — usually held on the king or queen's actual birthday. But Edward VII, who reigned from 1901 to 1910, was born in November. He celebrated officially in May or June because there was less chance of it being cold and drizzly during the outdoor event.

Like the Queen, Paddington Bear also has two birthdays a year. The marmalade-loving bear from deepest, darkest Peru has birthdays on 25 June and 25 December.

Over the years, Queensland, as well as most other Australian states, has continued to observe the Queen’s birthday in June, even though the actual birthday of Queen Elizabeth II is 21 April. Although you can’t pick or change the date you were born, it does appear that when it’s celebrated can be changed. So why has Queensland stepped out of line with the other states and Commonwealth countries and joined the Western Australia camp?

After the election of the LNP Newman Government in 2012, until its shock electoral loss in January 2015, there was a steady output of ideological revisionism aimed at bolstering the concept of monarchy in Queensland.

While the Queensland government is responsible for setting the dates for all state-wide public holidays, there are only two – Labour Day and the Queen’s birthday – that have the potential to be changed.

At the time, Premier Anna Bligh said all public holidays marked significant dates and were punctuated with official ceremonies or significance, except for the Queen’s Birthday which, unlike other public holidays, is not celebrated on a date that is particularly meaningful. She was right. Other public holidays are on dates of significance. Australia Day (26 January). Tick. Anzac Day (25 April). Tick. Labour Day (1 May). Tick. Easter. Christmas. Tick, tick. Queen’s Birthday…errrr? It’s not celebrated on the correct date and there is no official ceremony or any community engagement around it whatsoever.

Labour Day has special significance for Queensland because of its links to events in the labour movement of the late nineteenth century. The first weekend in May has been of major cultural and historical significance for the union movement in Queensland ever since the state’s first Labour Day procession – and one of the first in the world – took place in Barcaldine on 1 May 1891. The Labour Day public holiday has been celebrated by workers in Queensland on the first Monday in May since 1901 and is deeply ingrained in Queensland’s history as a day to recognise workers’ rights.

In 2012 Australia completely ignored the Diamond Jubilee. The same happens every Queen’s Birthday, both actual and official. Although the Queen’s Birthday public holiday is observed as a mark of respect to the Sovereign, there are never any public celebrations or community engagement around it whatsoever. Nothing actually happens. Even James Ellis, spokesperson for Australian Monarchist League expressed his disappointment at the lack of activities to celebrate the Queen’s 90th birthday in Australia.

Perhaps of more relevance to Australia, is celebrating the birthday of our own home grown "Queen". In 2015, Australians could spend the June long weekend celebrating the 21st birthday of our own Queen, by either watching Priscilla. Queen of the Desert or attending a birthday party for the film. In 2016 the Priscilla musical is currently on tour and performing this weekend in Oxford, Great Britain. 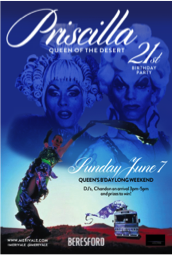 Australian Governor-General Peter Cosgrove joined a first-time gathering of Commonwealth governors-general in London to celebrate the Queen's 90th birthday over the weekend. He told reporters on Thursday he was bringing the congratulations of 24 million Australians to the longest-serving British monarch. Really? If this was true, wouldn’t we see some evidence of this congratulation in Australia?

The lack of any public activity in Australia around the Queen’s Birthday, apart from watching who’s wearing what to the Thanksgiving Service at St Paul’s Cathedral (and laughing again at the York princesses' poor fashion sense), is a clear example of how much the entire concept of monarchy is out-of-step with contemporary Australia.

In Queensland, the absurdity of monarchy is brought into sharp focus with moving it this year from June to October.

In 2014, I asked on the public holiday given for the Queen’s birthday in Queensland, if it isn’t “time to break free?” The Australian Monarchist League line is that celebrating the Queens’s Birthday, both actual and official, has nothing whatsoever to do with a republic and everything to do with honouring the Queen of Australia.

Moving the Queen’s Birthday in Queensland from a date that is traditionally relevant to Britain to an alternate date, is a harbinger of the growth of republican sentiment in Australia. Australia today, is one of the world’s great nations, with a bright future that must be 100 per cent in the hands of the Australian people. We are ready to move on from our colonial past and become a fully independent nation with fully Australian national institutions, including our own head of state.

It appears Australians will turn out and show respect to the Queen when she is here but when she is not, then the concept of monarchy becomes irrelevant. Australians may like the celebrity surrounding the monarch and the royal family when they visit Australia (which is pretty rare) but are totally uninterested in any form of royal celebration when the "party girl" is not here. You can’t have a party without the "party girl", which brings up the issue of an absent head of state.

Former Prime Minister Paul Keating has it right when he says our head of state should be an Australian citizen, who lives in Australia, who is chosen by Australians and who represents Australians.

Please put your social media weight behind this. Sign, and RT!
Thank you https://t.co/WFoIGcyHNv