If a poll was taken in any major city I’d wager the amount of people that knew of this anniversary would be almost nil. In May 2012, there will be a Diamond Jubilee Pageant in the grounds of Windsor Castle, and a flotilla of 1,000 boats will sail along the Thames on 3 June 2012 the day before a special Jubilee Bank Holiday. But what is happening in Australia? An extra public holiday in Queensland – a rebadged Queen’s Diamond Jubilee holiday to help reposition Queen’s Birthday holiday to early October – but very little else it seems. The Australian Monarchist League has been trying to raise interest in celebrating the Diamond Jubilee in Australia since 2009 but no one seems to be interested.

Professor John Warhurst, deputy chairman of the Australian Republican Movement, says that in 2012 we do not have the same ardour for a jubilee:


''I don't think Australians care. I think they care less and less as years go by. There's increasing republicanism, the world has changed so much, and the royal family and the Queen play such a lesser role in Australian life than they did when the Queen came on to the throne.''

Perhaps this can be seen in the lack of activity for the 60th anniversary of the Queen’s Ascension.

It seems the monarchists appear bemused and a little confused as to why there hasn’t been any action at a government level to celebrate in Australia the Queen’s Diamond Jubilee.  In her welcome speech to the Queen at the Parliament House reception on Friday, 21 October 2011, the prime minister mentioned Her Majesty’s fast approaching Diamond Jubilee. However, despite approaches to the Prime Minister's office by the Australian Monarchist League, ranging over two years, the Rudd/Gillard governments have not announced any plans whatsoever for national celebrations. Philip Benwell, Australian Monarchist League National Chairman, stated recently:


“Australia is the only country of which the Queen is the monarch not to have announced plans to celebrate what is our first Diamond Jubilee since Federation”.


“Honouring the Queen of Australia has nothing whatsoever to do with the debate on a republic but everything to do with paying tribute to our sovereign head of state who has sought only to serve at the people’s will.”

In September 2011 the Australian Monarchist League requested the Minister for Sustainability, Environment, Water, Population and Communities to engage with them and State governments and local councils to celebrate the Queen’s Diamond Jubilee in 2012 by planting sixty trees in each local government area. The response, which seemed to detail how to go about seeking funding and grants for projects, didn’t seem all that supportive.

But the question is still what, if anything is happening today to celebrate the first of the 2012 Diamond Jubilee events? At 11am Cardinal Pell will preach at a United Ecumenical Accession Day Service at St James’s Church, King Street in Sydney, and the Moreton Council in Queensland will host a morning tea for the Diamond Jubilee on 7 February 2012. But true believers are holding several private do's. Bryan Stertern-Gill, chairman of the Australian Monarchist League in Victoria, will attend a friend's private dinner in Melbourne for 40 people. At the Hotel Windsor ballroom on Monday, 150 people, mostly from 12 local ''loyal societies'', and former governors-general Michael Jeffery and Peter Hollingworth, will enjoy a $145-a-head, three course dinner. The societies include the Company of Armigers (coat of arms enthusiasts), the Australia-Britain Society and the English Speaking Union. Not that much activity, really, for the major event on their calendar. To make it worse, the City of Melbourne, the Victorian State Government and the Victorian Governor have no official plans to mark Monday’s Diamond Jubilee — and nor does the South Australian government. The silence from all other State governments suggests they have a similar position. 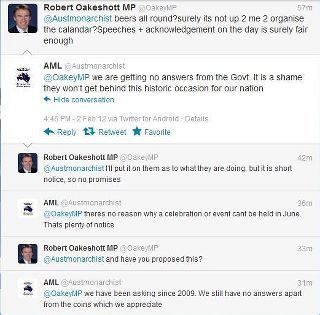 There has not been, to date, any announcement of national plans to celebrate Queen Elizabeth's Diamond Jubilee, apart from a commemorative silver 50c coin being produced by the Royal Australian Mint. Senator Lundy, Parliamentary Secretary to the Prime Minister, announced recently that there will be no Diamond Jubilee Medal minted in a similar manner to the United Kingdom and Canada as “medals were not part of the Australian honours system”. A recent twitter exchange between the Federal Member for Lyne, Rob Oakeshott, and the Australian Monarchist League confirms the Federal Government not “getting behind” the Diamond Jubilee. When Oakeshott was asked by Australian Monarchist League “apart from speeches, what do you support for Australia to recognize the Diamond Jubilee of the Queen of Australia”, he replied “maybe a special Coke can with the Queens name on it?”

The Australian Monarchist League line is that celebrating the Queens’s Diamond Jubilee has nothing whatsoever to do with a republic and everything to do with honouring the Queen of Australia. It appears Australians will turn out and show respect to the Queen when she is here but when she is not then the concept of monarchy becomes irrelevant. Australians may like the celebrity surrounding the monarch and the royal family when they visit Australia (which is pretty rare) but are totally uninterested in any form of royal celebration when the ‘party girl’ is not here. You can’t have a party without the ‘party girl’, which brings up the issue of an absent Head of State — bring on a resident for president!