Labour Day / May Day is a public holiday held on different dates in different Australian states. It has its origins in the eight hour day movement, which advocated eight hours for work, eight hours for recreation, and eight hours for rest. But, with declining union membership, why do we continue to celebrate it? As Queensland unionists today break out their hats and placards, it's a time to consider the history of Labour Day and its wider significance, with its connection to the Australian ideals of mateship and egalitarianism, writes Australian history editor, Dr Glenn Davies. 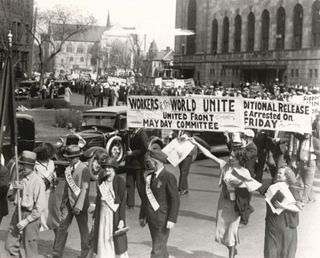 Labour Day, like Anzac Day, is a day when we remember the sacrifices our forebears made: the mateship, the loyalty and the determination to build and protect the freedom and rights we now enjoy. Both are also occasions when we recognise the ongoing struggles of today, and thank those standing beside us in the fray. Today we celebrate those workers and union delegates who stand alongside their mates and colleagues to preserve and better the working conditions of all Australians. We celebrate the toil of men and women everywhere, and in these economically dark times we also extend our hands and hearts to those who have lost jobs and pride.

For, like Anzac Day, Labour Day is – above and beyond its historical significance – a day all Australians can celebrate our egalitarian society, our innate sense of fairness and equity, and our willingness to campaign side by side for a better world. It is the day we celebrate the winding back of the exploitation and oppressive working hours that were the norm in the early nineteenth century during the Industrial Revolution. It is a day we remember the efforts of the labour movement which brought us the eight hour day and over the ensuing decades of struggle such basic advances as minimum wage levels, safety in the workplace and the right – bar a brief return to the industrial relations Dark Ages during the Howard era – to bargain as a collective.

For Labour Day is not a celebration of militant trade unionism. It is not a conga-line of left-wing ratbags winding their way through the streets chanting slogans calling for the downfall of capitalism. Labour Day, particularly in today’s world where ordinary hard-working people are increasingly left bleeding on the economic roadside from collateral damage inflicted by the global recession, is about family, freedom, and a fair go. It is about empowerment in a world where individuals still too often have little control over their own destiny when it comes to the workplace.

The history of Labour Day in Australia spans over 150 years. It is an important annual event that commemorates the granting of the eight-hour working day for Australians and remembers those who struggled and succeeded to ensure decent and fair working conditions in Australia. The day known as Labour Day in Queensland and the Northern Territory and May Day in other Australian states, is a celebration of workers’ achievements throughout history.

During the mid to late 1800s the working day was long and arduous, where some employees would work up to 12 hours a day, six days a week. Many Australians saw the need for better working conditions and in the 1850s there was a strong push for this. On 21 April 21 1856, stonemasons at the University of Melbourne marched to Parliament House to push for an eight-hour working day. An agreement with employers for a 48-hour week was eventually reached and Australian workers welcomed the new eight-hour day. A victory march was held on 12 May 1856 that year and each year after that. In 1856 the new work regulations were recognized in New South Wales, followed by Queensland in 1858 and South Australia in 1873. In 1874, Tasmania joined the other states in adopting the shorter eight-hour working day. In 1879 the Victorian Government made one further step towards better conditions for employees by proclaiming a paid public holiday that year. However, while a change was made to the hours worked each day, the five day work week we enjoy today took almost a century longer to be adopted finally in 1948.

In Queensland, the first Labour Day celebration took place in Brisbane on 16 March 1861 and was essentially a celebration by a small number of skilled building workers who had recently achieved an eight-hour working day. The date of the event was chosen to coincide with the anniversary of the first workers achieving the eight hour day in Queensland. For more than 20 years, the bulk of workers who did not enjoy an eight hour working day were excluded from the celebrations and the focus was on celebrating trade union achievements. The small number of elite Queensland trade unionists who participated in the eight hour day celebrations showed little sympathy for their fellow workers who laboured in excess of eight hours.

The first to follow the example of the Australian workers were the Americans. In 1886 they decided that May 1 should be the day of universal work stoppage. On this day 200,000 of them left their work and demanded the eight hour day. The historic strike of 1 May 1886 was a culmination of a concerted struggle. Chicago was the major industrial centre of the USA. Police attacked striking workers from the McCormack Harvester Co., killing six.

On 4 May 1886 at a demonstration in Haymarket Square to protest the police brutality a bomb exploded in the middle of a crowd of police killing eight of them. The police arrested eight anarchist trade unionists claiming they threw the bombs. To this day the subject is still one of controversy. The question remains whether the bomb was thrown by the workers at the police or whether one of the police's own agent provocateurs dropped it in their haste to retreat from charging workers.

In what was to become one of the most infamous show trials in America in the nineteenth century, but certainly not to be the last of such trials against radical workers, the State of Illinois tried the anarchist workingmen for fighting for their rights as much as being the actual bomb throwers. Whether the anarchist workers were guilty or innocent was irrelevant. They were agitators, fomenting revolution and stirring up the working class, and they had to be taught a lesson. Albert Parsons, August Spies, George Engle and Adolph Fischer were found guilty and executed by the State of Illinois.

In Paris in 1889 the International Working Men's Association (the First International) declared 1 May an international working-class holiday in commemoration of the 1886 Haymarket Martyrs. The red flag became the symbol of the blood of working-class martyrs in their battle for workers rights.

In light of the labour movement’s successful push for an eight-hour day, a large May Day meeting was held in Melbourne on 1 May 1890. Other Australian capital cities also held May Day meeting at the same time. On 1 May 1890, the Brisbane Workers editorial stated:

“May Day, this is our May Day, the by-gone jubilation of our forefathers for the reconquering of by the bright sunshine of the bitter northern winter, the new-born celebration of the passing of the workers' winter of discontent. In Germany, in Austria, in Belgium, in France, all through Europe, in the United Kingdom and in the great English speaking republic across the Pacific, millions of workers are gathering at this hour to voice the demands of Labor for fair conditions of laboring. Never in all history was there such a meeting”.


The spirit of the activists and early workers organisers is summed up in Bernard O'Dowd's poem, May Day where he calls for Australians to stand up united and maintain their rights to an eight-hour work day.

Come Jack, our place is with the ruck
On the open road today,
Not with the tepid "footpath sneak"
Or with the wise who stop away.

A straggling, tame procession, perhaps,
A butt for burgess scorn;
Its flags are ragged sentiments,
And its music's still unborn.

Though none respectable are here,
And trim officials ban,
Our duty, Jack, is not with them,
But here with hope and Man.


The Labour Day date was moved from May to the second Monday in March in some parts of Australia after World War II.  Since 1948, Labour Day in Western Australia has been observed on the first Monday in March and marks the granting of the eight hour working day to Western Australians. For a large section of the Brisbane labour movement it remained important that the Labour Day celebrations be changed to enable participation by all Queensland workers and that the date of the procession from the traditional one on 1 March to 1 May. The main arguments for changing the date of the celebrations was to make them part of the international campaign, begun by the International Labour Congress in 1889, to make 1 May an official workers holiday around the world. This campaign was given a major boost when, on 1 May 1891, hundreds of striking bush workers held Australia’s first May Day procession through the streets of Barcaldine.


On 1 May 1891 more than 1000 striking shearers participated in a May Day march in Barcaldine, Queensland where their leaders wore blue sashes and they carried banners and the Eureka flag. It was reported that cheers were given for “the eight-hour day”. Henry Lawson wrote “Freedom on the Wallaby” to mark the day:

So we must fly a rebel flag
As others did before us,
And we must sing a rebel song
And join in rebel chorus.
We'll make the tyrants feel the sting
O'those that they would throttle;
They needn't say the fault is ours
If blood should stain the wattle.


From May 1893 the holding of Labour Day and May Day in Queensland has proceeded hand-in-hand. Unfortunately, over time, the reasons for shifting Labour Day so that it corresponded to May Day have been forgotten. But, equally clearly, the now largely forgotten campaign to link the two had made Labour Day in Queensland a significant occasion, when not just the eight-hour working day is celebrated but also the international solidarity of labour. In fact, Queensland unionists are almost alone in celebrating Labour Day on or around May Day as most other states still time their celebrations to coincide with anniversaries of eight-hour day victories.

The annual Labour Day holiday and march are a celebration of the historical triumphs of workers, particularly the achievement of the eight hour working day. Indeed the number eight has often been spotted on many union buildings in Australia to symbolize an eight hour working day.  For example, the Eight-Hour monument featuring a golden globe bearing the 888 symbol was erected in Spring Street in Melbourne in 1903. The numbers are in support of British socialist Robert Owen who believed that people should have 8 hours to work, 8 hours for recreation and 8 hours to sleep. This philosophy helped foster The Eight Hours Movement.

Right across the world, members of trade unions and their supporters march at this time of year (usually on 1st May) in support of their fellow workers. The first Labour Day parade was held in Melbourne on 21 April 1856. Today parades across Australia remind us of the accomplishments made by the unions on behalf of the workers.

So celebrate Labour Day. Celebrate trade unions, freedom of association, vigorous debate and working families. For that is the sum of us.