Goodnight knights and dames: Taking the Queen out of Queensland

Queensland looks like becoming a little less 'Queenie' with the proposed move of the Queen’s Birthday holiday next year and no ‘Sirs and Dames’ announced in yesterday's honours list. History editor Dr Glenn Davies asks if this indicates an ebbing of monarchism in Australia.

Yesterday, the Queen’s Birthday was celebrated by a public holiday in all states and territories except WA, which celebrates it on 28 September. This will be the last year Queensland continues with this date.

After the election of the LNP Newman Government in 2012, until its shock electoral loss in January, there was a steady output of ideological revisionism aimed at bolstering the concept of monarchy in Queensland.

At the time, Premier Anna Bligh said all public holidays marked significant dates and were punctuated with official ceremonies or significance, except for the Queen’s Birthday which, unlike other public holidays, is not celebrated on a date that is particularly meaningful. She was right. Other public holidays are on dates of significance. Australia Day (26 January). Tick. Anzac Day (25 April). Tick. Labour Day (1 May). Tick. Easter. Christmas. Tick. Tick. Queen’s Birthday…errrr? It’s not celebrated on the correct date and there is no official ceremony or any community engagement around it whatsoever. 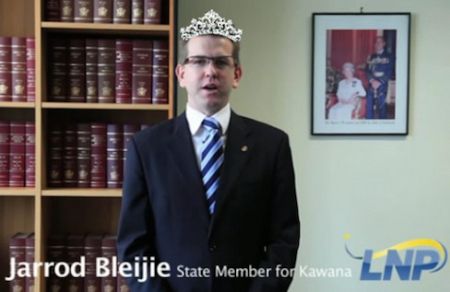 Newman Government Attorney-General and ardent royalist Jarrod Bleijie did all he could to bring the monarchy back into the centre of Queensland public life. Thankfully, he is now sitting on the Opposition benches.

Labour Day has special significance for Queensland because of its links to events in the labour movement of the late nineteenth century. The first weekend in May has been of major cultural and historical significance for the union movement in Queensland ever since the state’s first Labour Day procession and one of the first in the world took place in Barcaldine on 1 May 1891.

The Labour Day public holiday has been celebrated by workers in Queensland on the first Monday in May since 1901 and is deeply ingrained in Queensland’s history as a day to recognise workers’ rights. With the recent Palaszczuk Government decision, now events being planned for 2016 to mark the 125th anniversary of the 1891 Shearer’s Strike and first Labour Day held in May in Queensland will be able to go ahead.

On 27 March 2014, Prime Minister Tony Abbott restored imperial honours for Australians. The re-establishment of the Imperial honours was done quickly and without consultation by Tony Abbott with his Federal front bench, let alone the first two recipients. At the time, the PM said he believed the awarding of "Sirs and Dames" was:

"... an important grace note in our national life."

For the first time since 1986, “pre-eminent” Australians were to be honoured as Knights and Dames in the Order of Australia. However, when Prime Minister Abbott named outgoing Governor-General Quentin Bryce a dame and her successor General Peter Cosgrove a knight the satirists had a field day.

"Knight," "dame," restored to the Order of @Australia, irking foes of the country's monarchy: http://t.co/FMAUzntBwl http://t.co/HaVHSOVoMO

'In the symbolic landscape of Australian civic culture, Tony Abbott’s restoration last week of Australian knights and dames perhaps stands as one of the most pompous, pretentious, nostalgic and self-indulgent prime ministerial decisions in a generation.'

David Morris, then national director of the Australian Republican Movement, stated at the time:

'Since Mr Abbott’s announcement about 'knights and dames', our annualised membership growth rate has spiked to about 5000%. Many are re-joining, having previously been members. Many are people who say they voted for Mr Abbott’s Government but are dismayed by his personal decision, apparently made only in consultation with the Queen.'

Imperial honours are divisive and are out of touch with modern, multicultural, egalitarian Australia. Perhaps another own goal by the Prime Minister may be good for the movement towards an Australian republic.

But just when you thought Prime Minister Tony Abbott's decision in 2014 to restore Imperial knights and dames couldn't become any more bizarre, he used the 2015 Australia Day's honour list to award a knighthood to the Queen’s consort, His Royal Highness The Prince Philip, Duke of Edinburgh, and Air Chief Marshal Angus Houston (retd). One is currently the Chair of the Council for the Order of Australia, and the other is … well, the husband of the monarch.

As a Palace spokeswoman said at the time:

"Knights and dames in the Order of Australia are approved by the Queen on recommendation of the prime minister. We wouldn't comment further on the process."

Tony Abbott defended his selection of Prince Philip as a "Captain’s pick". Grandfather Royal, Prince Philip, apparently was "picked" by Tony Abbott to be honoured by Australia with an AK for his contribution to Australia throughout the Queen's 62-year reign and his long life of service and dedication. Special mention was also made of the Duke of Edinburgh Awards in Australia, which he said had positively influenced the lives of hundreds of thousands of young Australians. The overwhelming chorus of outrage and stunned disbelief coming from throughout Australia not only had federal LNP politicians distancing themselves from Prime Minister Abbott at the speed of light, but almost brought about his dismissal from office.

It was crystal clear that the message from the Australian people was if our identity today is Australian, then surely our national honours should be thoroughly Australian. It seems that even Tony Abbott heard this. Even the dyed-in-the-wool monarchist, former national director of Australians for Constitutional Monarchy, who is perhaps even still a British citizen, Tony Abbott received the message and skipped appointing any Knights or Dames in the 2015 Queen’s Birthday Honours List. Perhaps, though, this may have been because he was "pipped at the post" in appointing his current favourite royal as a Knight, Prince Harry.

At the time, I’d suggested that as one of the only two pre-1985 AK’s living was Prince Charles and, with the provision that a knight can be a non-citizen, that good money could be laid on Princes William or Harry receiving a knighthood in 2015 for having turned up in Australia a few times. It appears Prince Harry’s grandmother, Queen Elizabeth II knighted Tony Abbott’s favourite spare-heir as a ‘Sir’ in a private ceremony. With the birth of Prince George, and now Princess Charlotte, Prince Harry moves from spare-heir to sir-plus.

Australia today is one of the world’s great nations, with a bright future that must be 100 per cent in the hands of the Australian people. We are ready to move on from our colonial past and become a fully independent nation with fully Australian national institutions, including our own Head of State.

What has been confirmed with the non-appointment of any "Sirs and Dames" is that Prime Minister Tony Abbott has clearly received the message there is no place in contemporary Australia for British aristocratic titles. To have done differently today may have resulted in the loss of his own position. This is a reflection of the strength of republican values in contemporary Australia.

It is time to set a new agenda for Australia focussed on everyday Australian families not royal families. There is an ideological war happening in Australia skirmishing around the place of families in our society. In Queensland the changes around the dates for Labour Day and the Queen’s Birthday public holidays is a visible manifestation of this war.