The Morrison Government's stimulus may be too little too late

The Morrison Government has announced a $17.6 billion economic stimulus package to stave off a looming recession but will this work? Alan Austin recalls lessons from the GFC ten years ago.

WE ACTUALLY KNOW a lot about economic stimulus. Governments, economists and others watched with fascination how every administration in the developed world grappled with the 2008 global financial crisis (GFC). Most implemented a stimulus program of some sort.

Exhibit A, of course, was Australia, which led the world with the greatest, fastest and best-targeted stimulus regime of all. This is what we now know.

Virtually all players and observers in free enterprise economies today accept the merit of government intervention. Those in the Liberal Party, the Murdoch media and the Institute for Public Affairs (IPA) who claimed Australia’s stimulus packages from 2008 to 2010 were damaging have since been discredited.

The only developed countries in 2008 and 2009 which averted deep and destructive recession were Australia, Israel, Poland and South Korea. All undertook massive stimulus spending.

Australia’s then Prime Minister Kevin Rudd stunned the world in October 2008, when he announced the first stimulus tranche of $10.4 billion, followed by a massive $42 billion. The eventual grand total came to $67 billion.

Dutch academics Stephen Bell and Paul ‘t Hart from Utrecht University were among those gobsmacked by this quantum:

By any standard, the GFC was a remarkable episode in Australian public policy. The sheer scale of the crisis response moves that were made continues to impress ... These were audacious moves, outright ‘policy gambles’ under conditions of radical uncertainty.

Australia did not spend the most. South Korea and the USA spent more, relative to their gross domestic product (GDP). But because their responses were slower, they were less effective.

The first strategic merit of both the home insulation scheme and the schools' infrastructure program was that they did not require land acquisitions or time-costly legislation.

“The OECD concluded that Australia's fiscal stimulus package 'was among the most effective'. It attributed this to both the size of the stimulus measures and the speed with which it was introduced.”

The second genius of the insulation and school buildings schemes was that they generated economic activity literally in every community across the land. Few other governments had the wit to do this.

... while Australia's stimulus package was one of the world's largest as a percentage of GDP, a number of nations with large packages did not perform very well ... The targeting of households and schools (on which work can be undertaken rapidly) also contributed to the speed of its effect.

Strategies across the world varied, with different mixes of tax cuts and direct spending. A graph published by the Organisation for Economic Cooperation and Development (OECD), reproduced here, shows these mixes neatly. We then match strategies with outcomes. 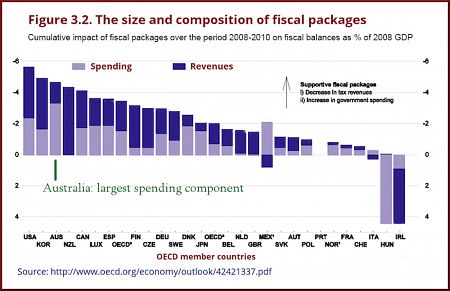 The results are emphatic. Tax cuts did not succeed. New Zealand relied entirely on tax cuts, then copped the worst recession of all OECD countries, except Greece, with eight negative quarters of GDP growth and two negative years. Tax cuts in Finland, the Netherlands, Sweden and the Czech Republic comprised three-quarters of their stimulus. All went into deep recession lasting two or three years.

At the other end of the continuum, Australia and Poland relied predominantly on spending and gained the greatest benefit.

Wastage is not necessarily bad

One of many malicious lies about Rudd’s 2008 stimulus was that much of it was wasted. It wasn’t.

If you hadn't spent the money, there would have been waste ... You would have had high unemployment, you would have had capital assets not fully utilised — that's waste. So your choice was one form of waste verses another. And so it's a judgment of what is the way to minimise the waste. No perfection here. And what your government did was exactly right.

Debt is not a problem in itself

Another malicious lie was that Labor destroyed the economy by going into debt to fund the spending. This is false on several levels, including the claim that the Howard Government left plenty of money in the bank. It didn’t. It is also false to assert that Labor increased debt enormously. At the end of Labor’s term, net debt was only 10.4% of GDP, close to the lowest in the OECD.

There is an argument that the debt stacked on by the Coalition since 2013 – now near 20% of GDP – is excessive and costly. But there is no valid argument that funding stimulus through debt is intrinsically bad.

The rich will gain the most

Governments which support the wealthy above the majority and big foreign corporations above smaller local enterprises will use any crisis to shift wealth and income to the top end. This is a reality of contemporary economic management.

Forbes Magazine reported that in the USA, the rich benefited far more from the 2008 Great Recession than the poor and the middle:

After the economic collapse, there were some who ended up doing pretty well, according to Federal Reserve figures. Those in the top 10% saw median wealth jump by 26.6% since 2007. Everyone else was at best almost back to where they were (80th to 89.9th percentiles) or significantly worse off (all others).

Yes, it will funnel cash to the Coalition’s business mates. That is obvious. But whether it will stave off recession is not clear. The stimulus is not large. Total stimulus implemented in 2008-09 came to $67 billion. That was 4.62% of Australia’s GDP. The Coalition's $17.6 billion stimulus – just announced – is only 0.92% of current GDP — less than 1%.

Coronavirus stimulus package must head off recession and history has lessons for the Government - Politics - ABC News (Australian Broadcasting Corporation) https://t.co/6NSPf1ytG9 via @skinnergj

This is not the same scenario, however, so we must wait and see.

The Coalition and the media will falsify the outcomes

The final lesson is that Australia’s conservative parties and their enablers in the mainstream media will continue to infect voters with the zombie beliefs, which have prevented them since 2013 returning to office the economic managers with the world’s best economy to their credit.

Aust AAA credit rating from all 3 rating agencies was achieved for the first time ever under Labor following the implementation of our 2 stimulus packages.This didn’t stop Morrison whipping up deficit & debt hysteria for the next decade kicked along by Murdoch & AFR.#auspol