Who gave a "ratings agency" the power to endanger world financial stability, especially one so incompetent it based its disastrous downgrade of the US economy on a US$ 2 trillion mistake? John Bellows reports. 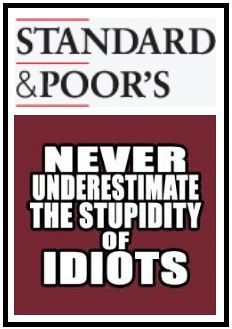 In a document provided to Treasury on Friday afternoon, Standard and Poor’s (S&P) presented a judgment about the credit rating of the U.S. that was based on a $2 trillion mistake. After Treasury pointed out this error – a basic math error of significant consequence – S&P still chose to proceed with their flawed judgment by simply changing their principal rationale for their credit rating decision from an economic one to a political one.

S&P has said their decision to downgrade the U.S. was based in part on the fact that the Budget Control Act, which will reduce projected deficits by more than $2 trillion over the next 10 years, fell short of their $4 trillion expectation for deficit reduction. Clearly, in that context, S&P considers a $2 trillion change to projected deficits to be very significant. Yet, although S&P's math error understated the deficit reduction in the Budget Control Act by $2 trillion, they found this same sum insignificant in this instance.

In fact, S&P’s $2 trillion mistake led to a very misleading picture of debt sustainability – the foundation for their initial judgment. This mistake undermined the economic justification for S&P’s credit rating decision. Yet after acknowledging their mistake, S&P simply removed a prominent discussion of the economic justification from their document.

In their initial, incorrect estimates, S&P projected that the debt as a share of GDP would rise rapidly through the middle of the decade, and they cited this as a primary reason for a downgrade.

In S&P’s corrected estimates – which lowered S&P's projection of future deficits by $2 trillion over 10 years and lowered S&P's estimate of debt as a share of GDP in 2021 by 8 percentage points - public debt is much more stable.

The error came about because S&P took the amount of deficit reduction CBO calculated from the Budget Control Act and applied it to the wrong starting point, or “baseline.”

Specifically, CBO calculated that the Budget Control Act, including its discretionary caps, would save $2.1 trillion relative to a “baseline” in which current discretionary funding levels grow with inflation.


S&P incorrectly added that same $2.1 trillion in deficit reduction to an entirely different “baseline” where discretionary funding levels grow with nominal GDP over the next 10 years. Relative to this alternative “baseline,” the Budget Control Act will save more than $4 trillion over ten years – or over $2 trillion more than S&P calculated. (The baseline in which discretionary spending grows with nominal GDP is substantially higher because CBO assumes that nominal GDP grows by just under 5 percent a year on average, while inflation is around 2.5 percent a year on average.

S&P acknowledged this error – in private conversations with Treasury on Friday afternoon and then publicly early Saturday morning. In the interim, they chose to issue a downgrade of the US credit rating.

Independent of this error, there is no justifiable rationale for downgrading the debt of the United States. There are millions of investors around the globe that trade Treasury securities. They assess our creditworthiness every minute of every day, and their collective judgment is that the U.S. has the means and political will to make good on its obligations. The magnitude of this mistake – and the haste with which S&P changed its principal rationale for action when presented with this error – raise fundamental questions about the credibility and integrity of S&P’s ratings action.


(John Bellows is US Treasury Acting Assistant Secretary for Economic Policy. This article was originally published on the US Treasury website on 6/8/11 under the title 'Just the Facts: S&P's $2 Trillion Mistake')