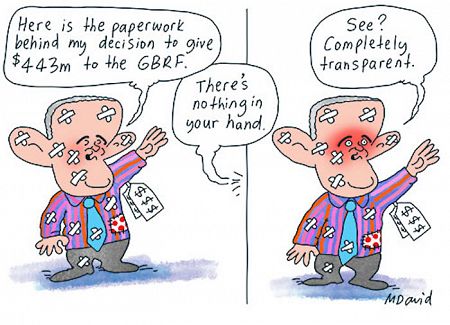 The current #ReefGate fiasco is only the latest in a long list of Malcolm Turnbull's scandals and non-achievements, writes senior editor Michelle Pini.

PRIME MINISTER MALCOLM TURNBULL has a sustained and unremarkable record of achievement in office, not least of all in the top job.

But let’s start with the Great Barrier Reef.

First, the Turnbull Government wanted to give away a billion dollars to the Indian-owned mining company, Adani, whose Carmichael coal mine would pretty much finish off the Reef — which is already suffering from the worst coral bleaching on record, brought on by climate change. The mine, if it goes ahead, will also destroy the billions the World Heritage-listed Reef brings to Australia in tourism (an estimated value of $56 billion and an annual economic contribution of $6.5 billion).

Then it established a $60 million fund to help “save” the Reef — an interesting after-thought, which does not even amount to ten per cent of the gift it was willing to give Adani to complete the destruction.

Finally, in this sorry tale of environmental irresponsibility, the taxpayer funds saved from the proposed handout to Adani were clearly burning a hole in the PM's pocket such that, now, he has actually given away almost half a billion (a lazy $444 million) to not-for-profit organisation the Great Barrier Reef Foundation, which is funded by the fossil fuel industry and chaired by former Esso CEO John Schubert.

Even to the least critical onlooker, isn’t this a bit like putting Member for New England Barnaby Joyce in charge of the entire parliamentary publicity department?

The grant was awarded to the Great Barrier Reef Foundation – supposedly to save the reef again – without due diligence, a tender process (or any process, it seems) and with no visible plan in sight as to how this might be achieved.

This latest frittering of public money happened after Prime Minister Turnbull, aided and abetted by Minister for the Environment and Energy Frydenberg, had a private meeting with the said company and was evidently so impressed with its lack of an actual proposal (the Foundation hadn't even applied for the money) he decided to hand over the loot — literally.

So astounding was this move, even the Foundation’s managing director, Anna Marsden, described the decision as "like we had just won lotto".

According to Opposition Leader Bill Shorten:

“Most Australians would be shocked to learn this Prime Minister personally just walks into a meeting and hands over nearly half a billion dollars of taxpayers’ money without a moment’s thought."

Yes, most of us probably are.

This bizarre development, however, is just the latest in a series of actions, which can only be interpreted as designed to undermine all the environmental processes that we already have in place – dismally inadequate though they may be – and underscores Turnbull's complete lack of concern for the environment.

A brief look at his record as Environment Minister for the Howard Government is also undistinguished, to say the least. His only achievement – apart from voicing support (and then rescinding it) for the Rudd Government’s ill-fated emissions trading scheme – seems to be replacing incandescent light bulbs with toxic fluorescent bulbs, which appear to be of no help to the environment, since their disposal is also an environmental problem.

And then there are the following environmental "achievements" during his Prime Ministership:

RT to share this with your friends. They need to see this. #ausvoteshttps://t.co/V8PRRxJ55O

No doubt there are more, as it really is impossible to provide a conclusive list of Turnbull's non-actions on climate and the environment within the confines of this article.

Then there is the endless list of other backflips such as the NBN fiasco, the escalation of asylum seeker cruelty under his watch, the slow but sure destruction of the ABC, and the ridiculous and expensive process to arrive at same-sex marriage, to name but a few. When we consider the PM's inability to get his company tax cuts through, despite ad nauseam attempts, or to achieve consensus on the NEG, spiralling Government debt, as well as his Government's Super Saturday failure, it is a stretch to find any actual successes during Turnbull's leadership.

As IA's Dave Donovan has revealed, however, there are a host of backflips and at least one dubious charitable Foundation with which Malcolm Turnbull is involved.

However, #ReefGate, as it has been dubbed, risible and scandalous though it is, may also have a silver lining — it may finally show all those previously hoodwinked by Turnbull’s previous claims to any convictions (of which, I am ashamed to admit, I was one) that this particular PM has no convictions.

Malcolm Turnbull stands for nothing.

How will Turnbull squirm his way out of this one when MSM ask him - oh wait ... Just brilliant from @davrosz EDITORIAL: The FIGJAM philanthropist https://t.co/V7eMHfJ9Nd @IndependentAus

Malcolm Bligh hits a Reef: the Foundation has control of $443 million of taxpayer funds & no clear idea of how it is going to be spent, who will be spending it, or doing the work it is supposed to pay for, or how it is to be accounted for. https://t.co/UmS5u5d3Xi @IndependentAus

Jut checked my account to see if, despite me not asking but given I love the GBR, there had been a lazy $444m deposited by a generous government. Nope. #auspol @KKeneally