IT WAS ALWAYS going to be a hard gig — addressing the Melbourne Press Club on the issue of the future of the ABC.

For the current managing director, Michelle Guthrie, it may have been especially difficult. She is, after all, an unknown quantity. Since coming into the role two years ago, Guthrie has seldom made herself available to the media, which is an interesting position for the head of a publicly owned media organisation to take.

And it followed a week of extraordinary developments, which directly threaten the public broadcaster — with the Liberal Party voting to privatise it, the Government denying its sell-off and the Murdoch media, in the words of ABC Friends national spokesperson Ranald Macdonald, "relentlessly stalking" it.

At the sold-out event, the sense of public ownership is palpable. It is our ABC. We all pay for it and we all want access to it. And we are media, besides. It's our job to get answers.

Nick Leys, her media manager (until today) is fiercely overprotective. For IA, at least, there are to be no exclusives, no one-on-one five-minute spots, no interviews of any kind. And while questions may be (and were) submitted, they will not be answered, we are told. Questions may be posed – should an opportunity present itself – only at the Q&A session at the conclusion of the media event.

Yet the flow of criticism has been steady – at times even a raging torrent – from both sides of the political divide, about the ABC and about Guthrie's stewardship. Surely more communication would help to ebb that tide?

Regardless, Guthrie takes the podium and speaks about the fundamental need to keep the public broadcaster in public hands, about the ways in which the ABC punches above its weight and about meeting its many challenges. Her approach is businesslike, perhaps a more commercial style than we are used to seeing from an executive of a public broadcaster but delivered, it must be said, with sincerity. Of course, as one press club member opined, it is hard to gauge sincerity in an unknown quantity.

The figures at least, seem not to lie. Indeed, they support what many of us have long believed — that the ABC is a precious, irreplaceable public resource.

And Guthrie shares several, introducing them with this statement:

"How do you put a price on the value of the ABC? In pursuit of that answer, the ABC has commissioned Deloitte Access Economics to do some research."

'We are not your punching bag': ABC boss Michelle Guthrie hits back at the Liberal Party https://t.co/3Tw6HPAYW0

It is impossible to tell if commissioning Deloitte to put a commercial price on the public broadcaster will make it harder or easier to sell off, but here are a few early findings:

In a complex world it is too easy for the powerful to do their work in dark corners: to cynically use so-called narrowcasting messages that have a direct appeal to certain targeted audiences, while conveying an entirely different message to others; to rely on rhetoric that doesn’t match actions.

Yet Guthrie's legendary lack of accessibility, enabled by keeping the media firmly at arm's length, combined with her Murdoch media pedigree may also be construed as "hiding in a dark corner".

A silent ABC being 'done over' by Turnbull.
Guthrie remarkably quiet & reluctant to engage in what she herself previously has described as megaphone campaigning.
She says the best way to protect the ABC is to work quietly behind the scenes ... total BShttps://t.co/nWkJAj96Sb

Faine: Thank you for your talk today. I know I speak for many: we do not understand why you are so reluctant to do more of what you've just done today. We need a public champion, not a managing director who hides from the media or from public engagement [ ... ] Are you prepared to do more?

Guthrie: John, I wouldn't agree with you at all when you say I hide from the media.

Faine: I can't get you on my show, nor can any of my colleagues — or rivals, I might say.

I manage to get a question in about whether the unprecedented number of complaints from the Turnbull Government has led to an increasing need to "balance" the criticism, by creating a more conservative approach to current affairs programs; and whether the ABC can safeguard against inevitable future threats from governments of all persuasions.

Let me start with the premise of your question. My view is the Minister [Mitch Fifield] has the right, like every other Australian, to express a view about ABC content and we have processes to deal with complaints, and they are being followed.

Let me also put that complaint in some context. Since the start of the year we have received about seven complaints from the Minister and the Prime Minister's office, regarding a total of nine pieces of content.

Guthrie then goes into details regarding the great volume of output from the ABC over the same period.

As @latingle argues, the ABC is a political football for both sides.https://t.co/oM56tJZ3Tm

"It is an important step forward and will have gone a long way to shoring up her position with ABC staff. But although Guthrie says it is not her role to raise funds, it is her role. More money, not death by a thousand cuts, is what is absolutely needed."

As the media event draws to a close, a friend waves me over — she is close to Guthrie’s table. Nick Leys, with whom I had only been acquainted by phone and email, practically jumps in my path.

He is unsmiling as he warns:

"Okay," I mumble, wondering if I appear somehow menacing.

My friend doesn’t notice as she is focused on the guest of honour. “Excuse me, Michelle,” she says to Guthrie, "Would you mind if I take your photo with Michelle Pini, who asked a question earlier? Michelle, meet Michelle.” Guthrie and my friend laugh. I giggle nervously as I feel the burn of Leys’ piercing glare focused on the back of my head.

Guthrie is gracious and warm as she smiles for the camera:

I smile for the camera too, but I am wondering if her minder is calling security to have me evicted. I don’t ask for an interview. I am hardly the paparazzi. I don’t even dare ask Guthrie any more questions, but I do wrack my brain — what could I possibly ask that would be so damaging? Why is there a need to protect the head of a publicly owned entity from any questions? Will they let me leave through the front door with dignity? 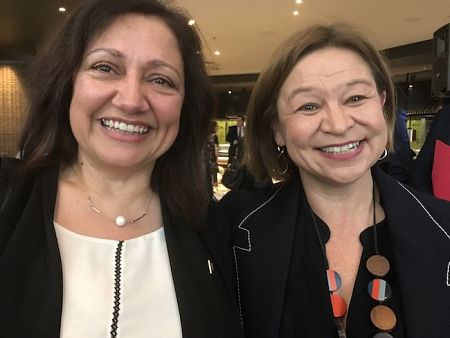 The Turnbull Government: Those that would destroy the ABC https://t.co/XbI62kq9SR @IndependentAus @JohnPassant