How Dutton and Molan justify the heinous

Senator Jim Molan's appearance on Q&A last night (28 May), during which he devised new and improved justifications for Australia's illegal and prolonged imprisonment of innocent refugees, suggests that he is deluded.

Delusion is defined in the Oxford Dictionary as:

‘An idiosyncratic belief or impression maintained despite being contradicted by reality or rational argument, typically as a symptom of mental disorder.’

This is not to say that he (like his idol, Minister for Home Affairs Peter Dutton) has delusions of grandeur – though there is also evidence of this – but that Molan, in attempting to justify the heinous, has created an alternate reality.

Morrison, Dutton or Turnbull: Who is the cruellest minister of them all?
Incisive article - again- from Michelle Pini on the amoral to the point of depravity Coalition's successful trashing of human rights, especially with refugees.https://t.co/C2LXxgd0qp @IndependentAus

Before we consider Senator Molan's comments, for those who may not be au fait with the status of Australia's current refugee policy under the Turnbull Government, let's first examine a few salient facts:

This reality is continually ignored by Turnbull Government Ministers such as Molan and Dutton, however, in a seemingly tireless campaign to hijack the political discourse about asylum seekers. 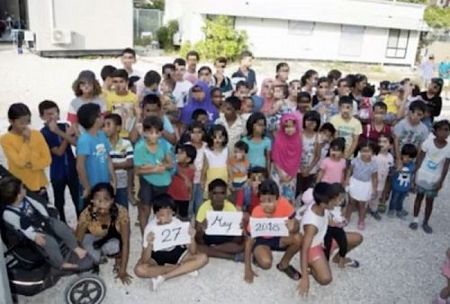 Exhibit A is Senator Molan's response to a question which identified Nauru as "an open-air prison", in which – despite repeated Government claims to the contrary – many children are being held and are unable to leave:

"Of course we acknowledge the children are there ... Of course they [the children] can't leave the island — unless their parents decide to go home."

Um, no ... it's a mystery, sure, but Minister Dutton – towards which Molan had just professed his unerring faith – claims:

"I've got every child out of detention."

Regarding the ability of these "non-existent" children to leave the island should their parents "decide to go home", there is the slight detail of how they came to be there. These children and their parents came to Australia in search of asylum from persecution and almost certain death — they are refugees. Sure, they could just book the next first class flight out to New Zealand, except the Turnbull Government won't let them leave!

Senator Molan later took great pride in proclaiming that 32 out of 1,600 people held for approximately five years "have gone home". This, in Molan's alternate reality, is apparently a great accomplishment.

Rounding off his ill-informed, if not outright false, representation of the asylum seeker policy of his Government, Molan asked and then proceeded to answer his own questions:

Who started this? Rudd/Gillard started it.

Who keeps them there? Naive activists.

In response to a question from the audience as to why Dutton removed a Tamil family, including two Australian-born children, from their Biloela community and placed them in detention, despite a 12,000-strong petition and no available details as to the reason for their removal, Molan – after admitting to having no actual information on this – replied:

"There must be some technical reason as to why these good people were taken away."

"How did we get to a place where we're raiding family homes at five o'clock in the morning?"

Here is an excerpt from the Holocaust Encyclopedia, detailing the deception and hijacking of the political discourse by the Hitler regime:

The Nazi leadership aimed to deceive the German population, the victims and the outside world regarding their genocidal policy toward Jews. What did ordinary Germans know about the persecution and mass murder of Jews? Despite the public broadcast and publication of general statements about the goal of eliminating “the Jews”, the regime practised a propaganda of deception by hiding specific details about the “Final Solution”, and press controls prevented Germans from reading statements by Allied and Soviet leaders condemning German crimes.

At the same time, positive stories were fabricated as part of the planned deception.

Despite Senator Molan's repeated gushes about how he "happen[s] to have great faith in Peter Dutton" and that Dutton "is a man that I believe in", Minister Dutton, aided by the delusion of fellow Coalition politicians, is attempting to create a public discourse which paints him as a benevolent overlord and the Turnbull Government's asylum seeker policies as logical and acceptable when they are, in fact, simply heinous.