Australia’s two major political parties are run by men. One of these men is prone to doing backflips on key issues and is under threat by a sniping, undermining challenger. The other one is Bill Shorten.

But that is not the impression one might receive by following most of the mainstream media. Their narrative, repeated and amplified by print and broadcast ‒ including on the ABC and SBS ‒ is that Prime Minister Malcolm Turnbull is ascendant, while Opposition Leader Shorten is in the doldrums. That Shorten’s leadership is tenuous and tarnished by a “backflip”, while Turnbull’s is safe and growing stronger.

As we have become accustomed, the facts simply don’t fit the mainstream media line. Let’s consider these twin tropes ‒ “leadership” and “backflips” ‒ to get to the truth.

WHOSE LEADERSHIP IS REALLY UNDER THREAT?

A couple of weeks ago Anthony Albanese made a formal speech in Sydney, in which he carefully laid out the policy direction he felt the Labor Party should be taking — the unquestionable prerogative of any frontbencher while in Opposition. One of Albanese’s points was that the ALP should “engage constructively” with business.

Then, through really nothing more than some mischievous comments by Christopher Pyne on Nine ‒ who cattily called the speech a rebuff of Shorten’s company tax policy and a declaration of all-out leadership war ‒ the media hares were off and running.

Rupert Murdoch’s Sydney picture book, the Daily Telegraph, took up the call to arms in its usual lurid style: 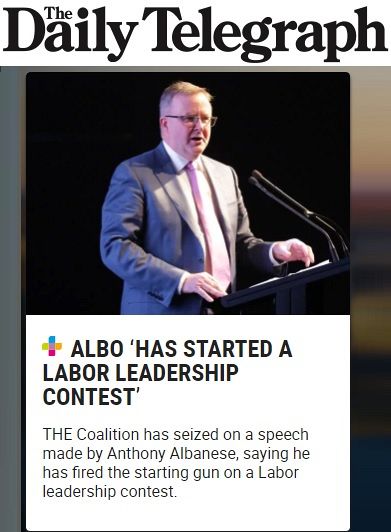 And the ABC and SBS; Channels Seven, Nine and Ten; Sky News and the rest of the Murdoch media monolith; and even the once astute Michelle Grattan in The Conversation spent the next week hunting Labor MPs to comment on the “tensions” and “division’ in the Party.

But it was all just a beat-up.

Shorten told the press he wasn’t offended by Albanese’s speech, Albanese denied the speech was a tilt at the leadership and no other Labor MPs even vaguely supported Pyne’s mythmaking.

Finally, yesterday, even News Corp was forced to admit that

‘Bill Shorten's leadership in Labor Party is stable, despite rumours.’

Rumours spread by a Liberal Party frontbencher, that is.

What makes this coverage even more risible is that changes to Labor Party rules after the largely media fomented instability of the Rudd and Gillard Government years mean that Shorten’s leadership is virtually unassailable — yet almost nowhere in all the frenzied reporting was this key detail mentioned.

What he actually said was:

“Labor doesn’t have to agree with business on issues such as company tax rates, but we do have to engage constructively with business large and small.”

He didn’t say that Shorten doesn’t engage with business that way. 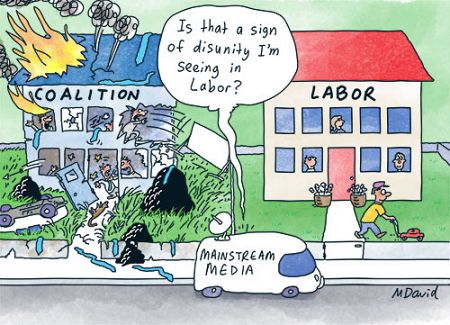 Turnbull vs the Extreme Right

While Shorten’s leadership is secure, the Prime Minister’s is under constant threat from his predecessor — the one he deposed just three years ago. Former Prime Minister Tony Abbott seems determined to bring Turnbull down — even if it means putting the Party into opposition so he can inherit the ruins.

Even beyond Abbott’s ambitions, the Coalition has long been deeply divided between its Centre Right faction and Extreme Right “Monkey Pod” grouping. And because he has sacrificed whatever few principles he once to held to appease the Hard Right to retain his title, Turnbull’s leadership has become a lamb-like thing.

Yet, regrettably unsurprisingly, nowhere in the mainstream media is is there talk of “tensions” or “division” in the Liberal Party.

Not even after Tony Abbott openly admitting on 2GB on Monday (2/7/18) that he still had ambitions for the top job:

“Sure, I guess it’s unusual for a Former Prime Minister to come back, you could really only come back if you were drafted by your party. But let’s just see how things work out.”

Not satisfied with throwing only that grenade, Abbott then came out the very next day at the annual dinner of the IPA’s “environmental” astroturf front, the AEF, to continue his long war against the war against climate change.

There, Abbott said Australia should pull out of the Paris Accord he signed Australia up to in 2015 and abandon Turnbull’s signature environmental policy, the NEG.

Abbott said the Paris Treaty, which

“… is driving the national energy guarantee [NEG], would be the best way to keep prices down and employment up; and to save our party from a political legacy that could haunt us for the next decade at least.”

Of course, Abbott leading a revolt against Turnbull’s environmental policies was what ended the now-PM’s opposition leadership in 2009. And now, just like then, the Extreme Right of the Coalition, have been sniping at Turnbull’s environmental policies, especially the much-derided NEG. Yet no-one in the mainstream seems to see Turnbull’s leadership as under siege. The brilliant mind of Phil Coorey has even reported Abbott as being “isolated” after his latest declaration, which quite obviously he isn’t.

And this is not even to mention the stark detail that Turnbull has now lost 35 consecutive Newspolls, whereas Abbott was rolled by him because he had lost just 30. Don’t Newspolls matter to the media anymore? Even though no party has ever won Government after losing more than 30 in a row. 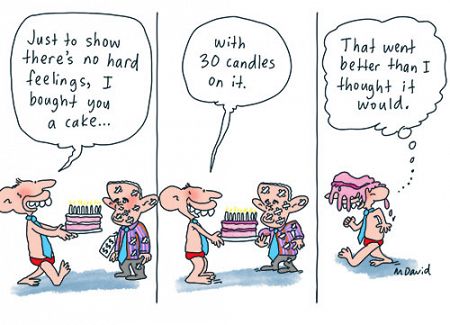 It is a very perplexing state of affairs.

It might be that the mainstream commentariat have become so fearful of losing the urbane Turnbull for the uncouth Abbott, as they did once before, they are doing all they can to prop him up. Or it might be that they simply just don’t want Labor to win. Or maybe a bit of both? Whatever the case may be, there is an obvious and discernible disconnect in the way they treat the two sides of politics with respect to “leadership”.

WHO IS THE BIGGEST FLIP-FLOPPER?

Find out by subscribing to Independent Australia, because this is only half the story. The rest of this editorial, originally published in our weekly subscriber newsletter, may be read in the IA members only area HERE.

2 Malcolm Turnbulls. EXPOSED.
Before the election: "we will not make any changes to penalty rates" After the election: tax cut and pay increase for me, penalty rate cuts for low income workers. "Get a better job." #auspol pic.twitter.com/bgtCfbFGBM