IN CONTRAST to the last severe worldwide economic recession, Australia is poorly placed to deal with the looming downturn caused by the COVID-19 pandemic. That is the conclusion of two reviews which assess the Coalition’s economic credentials negatively.

The International Monetary Fund (IMF) has issued its 'World Economic Outlook Report' with revised forecasts for outcomes over the next two years. It suggests Australia’s progress will be the worst in the Asian region and will lag badly worldwide.

The IMF expects Australia’s jobless rate at the end of this year to be 7.6% — the second-highest amongst the seven advanced Asian economies, behind only New Zealand. The average of the other six in this group – Japan, South Korea, Taiwan, Singapore, Hong Kong and New Zealand – is estimated to be 4.7%.

Australia’s jobless rate next year will be even worse, at 8.9%, higher even than News Zealand’s 6.8%. The projected 2021 average jobless rate for all six other advanced economies is 3.98%. Thus Australia’s rate is anticipated to more than double that of comparable Asian countries.

Worldwide, the report predicts jobless rates will increase substantially. Among the 36 rich, developed OECD members, the IMF estimates Australia will end up ranking a lowly 15th. This contrasts dramatically with the employment outcomes Australia achieved ten years ago during the global financial crisis (GFC) which Australia weathered far better than any other developed nation.

The #IMF said they expect Australia’s economic downturn to be worse than in the US, UK & for unemployment to keep rising...

Frydenberg should NOT exclude millions of workers from JobKeeper, which would prevent them joining the jobless queues!pic.twitter.com/KFoLH2DCun

The report observes that the pandemic 'is inflicting high and rising human costs worldwide and the necessary protection measures are severely impacting economic activity'.

It emphasises that risks are greater where governments do not take appropriate actions:

This is why the IMF has such a gloomy outlook for Australia. The whole world has watched the economy deteriorate over the last six years, as budget after budget has made the wrong decisions and as more and more wealth has bled from Australia through tax evasion and other rorts.

Australia a loser on growth

On growth of gross domestic product (GDP), the IMF believes Australia’s outcomes will be among the world’s also-rans. All seven major Asian economies are forecast to go into negative GDP growth this year but to differing extents. Australia’s is estimated at negative 6.7%, considerably worse than Japan, South Korea, Taiwan, Singapore and Hong Kong but slightly better than New Zealand’s negative 7.2%.

Further afield, Australia negative growth this year looks like ranking a dismal 19th among all 36 wealthy members of the OECD: 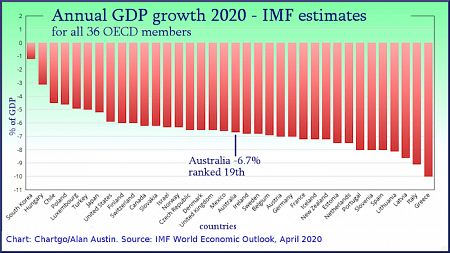 Why this is such an indictment is that during the last global crisis, Australia’s economic growth topped the developed world.

All independent observers have noted that Australia weathered the last recession far better than any developed country in the world. See here, here and here.

In a 2013 report for the German Institute for the Study of Labor, Professor Raja Junankar wrote:

'Most of the countries of the OECD are still suffering from the Global Financial Crisis (or as the Americans call it the Great Recession), but the Australian economy appears to be powering ahead. It is a miracle economy! Unlike most of the OECD countries, Australia did not even have a recession.'

In the second quarter of 2009, most OECD members were in negative annual GDP growth. But not all.

Australia led the world with a positive 1.9% as can be seen in the blue graph below: 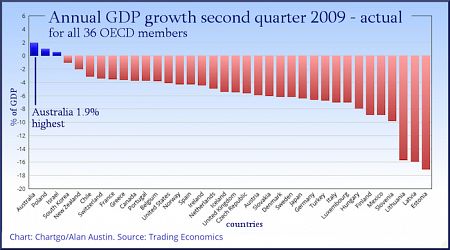 This signals that the current policy settings are heading the economy in the wrong direction and unless changed will result in losing the prized AAA status altogether.

Coalition and media denials of reality

There are several reasons few Australians realise their economy has been trashed by the Coalition over the last six years.

The first is that until the pandemic arrived, these have been global boom times. Jobs have been created worldwide at a remarkable rate, including in poorly-managed economies such as Venezuela, Australia and the USA. Even though Australia’s GDP growth has slipped badly relative to the rest of the world, it remains positive. The principal reason, however, is that the Coalition, its backers in big business and virtually all the mainstream media have fed the electorate a constant diet of false information. Malcolm Turnbull’s memoir just published contains a typical example:

'The Government that I have led has been a very effective one. We have achieved an enormous amount in economic and social reform in this Parliament ...'

That is the opposite of the truth.

Australia had the best-performed economy in the world when the Coalition took office in 2013. This has been quantified painstakingly by Independent Australia’s ranking on economic management (IAREM) and confirmed by many independent authorities. But Australia’s ranking tumbled through the Abbott years, then further under Turnbull — and it is still tumbling.

The mainstream media continue to wave through Coalition incompetence with “Nothing to see here, move along, please” in exchange for cash handouts and having to pay no taxes. In the case of the Australian Broadcasting Corporation, it appears to be in exchange for not getting funding slashed further than has happened already.

"We have approached this crisis from a position of economic strength. In the December national account numbers, we saw growth was rising ... It was ticking up. Unemployment was ticking down. Growth was ticking up and we had balanced the book for the first time in 11 years."

Frydenberg later threw in for good measure, “We are the party of lower taxes.”

All four propositions are just plain wrong, as readers of this journal will well understand and as the Insiders presenter should have known. The evidence against them is overwhelming.

If Australian voters actually knew this, they would not have returned this Coalition Government in 2016 and 2019. Then where would Australia be? Still number one in the world.

Australia under the Coalition: Economic management at an all-time low https://t.co/NgL8vuKFph @IndependentAus

Alan Austin’s defamation matter is nearly over. You can read the latest update here and help out by contributing to the crowd-funding campaign HERE. You can follow Alan Austin on Twitter @AlanAustin001.