Australia under the Coalition: Economic management at an all-time low

WE NOW HAVE nearly all the information on the economy’s performance in 2019 we are going to get. So we can complete the picture we began to assemble here in January when we examined 14 important outcomes – almost all of which deteriorated over the year.

One neat measure economists and others use to assess progress for average families is household consumption expenditure. This is the money families or individuals get to spend on necessities and luxuries after paying all direct taxes. Obviously, the higher the better.

Families in 2019 suffered the lowest increase in household spending in 28 years, at a miserable 1.43%. With inflation at 1.8% and population growth at 1.6%, this means most Australians spent less last year than the year before.

Government construction activity fell disastrously in 2019. Public sector engineering construction as measured by the Bureau of Statistics totalled $34 billion for the year.

That is the second-lowest percentage collapse in government infrastructure spending since records began in the mid-1980s. The lowest was in 2014 when Tony Abbott was trying to be Prime Minister.

The chart, below, shows investment on infrastructure per adult per year by each administration since accounts have been kept. The Abbott years were the worst, Morrison second worst. So far. 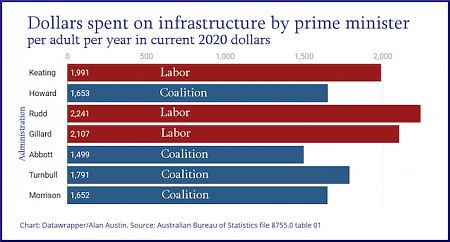 All construction activity, government and private, including houses and commercial properties plus large infrastructure projects, came to $204.9 billion for the year 2019. That was down 7% on the year before and down a staggering 15.2% from the $241.8 billion invested in Labor’s final year: 2012.

Growth in gross domestic product (GDP) for the last three months of 2019 was reported last Wednesday at 0.53% for the quarter and 2.19% for the year. This was a slight rise from 1.82% in the September quarter. It was marginally better than the December result a year earlier of 2.17%. It remains, however, well below the average of 2.89% over the last 20 years — a period which includes the global financial crisis (GFC).

Australia’s current global ranking on annual GDP growth is a lowly 108th, with an outcome well below the world average of 2.95%.

Through 2019, interest rates were cut three times in efforts to boost the Coalition’s tanking economy. To no avail. The Reserve Bank cut them again last week to an all-time desperation low of 0.50%.

Interest rates are now 1/4 of what they were during the worst of the GFC and yet the Morrison Government still doesn’t have a plan to get the economy moving. #auspol @ausecon #RBA pic.twitter.com/FuEivl0aoN

Governments, corporations and others follow keenly Transparency International’s annual corruption report. So they should.  Corruption is highly destructive of economic and social progress.

Australia score is just 77 and the ranking a lowly equal 12th. That’s down from eighth position through most of the Labor years and seventh in Julia Gillard’s last.

This assessment was made before the tawdry sports rorts affair and other recent thefts of public funds were exposed.

A few other gloomy outcomes complete the picture for 2019:

Overall, the outcomes confirm Australia’s economy is now more poorly managed than in any period since records have been kept, and possibly – yes, this is a big call – since Federation.

There is no excuse for this. External conditions are as benign as they have ever been. Demand for Australia’s resources continues to be strong. Trump’s trade wars continue to benefit Australia, Brazil, Chile, Russia and some others at the expense of the USA. Corporate profits are at all-time highs.

Readers with good memories may have noticed an intriguing pattern. It seems the greater the vehemence and outrage with which the Coalition and its spruikers in the media denounced Labor’s economic outcomes, the worse has been the deterioration under the Coalition.

The debt and deficits were “a disaster”. Debt has now more than doubled. Tony Abbott wanted above all “to be an infrastructure prime minister”. He took construction to an all-time low. Interest rates clipped to 2.50% in 2013 were depicted as proving “the economy is struggling”. Now they are at 0.50%.

The Coalition promised “jobs and growth”. Both have tumbled disastrously down the global rankings from near the top to among the losers.

Role of the dominant media

This wretched regime could not continue without its enablers. According to the mainstream media, all is well.

Wednesday’s bleak growth figures were greeted with these headlines:

The media have no interest in reporting what is really happening. They serve their rich, often foreign, masters who love the current plan — to shift as much income and wealth as possible straight offshore.

Why increase family incomes or spend money on roads, rail and facilities in Australia when it could be spent on yachts, private jets and Richebourg Grand Cru in the Cayman Islands?

#auspol #ScottyfromSportsMarketing and his treasonous #COALition of corruption are bringing our country to its knees. They need to go!
Morrison Government breaks debt records in December — along with promises https://t.co/Xiyv04sblc @IndependentAus