Bronwyn Bishop is a person of many parts, none of which qualify her to be Australia’s Speaker, writes senior correspondent Barry Everingham.

ONE OF THE GREAT TRADITIONS inherited by the Australian House of Representatives from Britain’s House of Commons has been the rule of the impartiality of the Speaker. Indeed, in the Commons the Speaker remains in situ even after elections, where he or she may not remain a member of the ruling party.

In the main, our Speakers have been good, a few bad, but none, with only two who broke the rule: both ALP Members – Leo McLeay in the Whitlam years and way back to a character called Sol Rosvear, who began as Speaker under Curtin.

The current Speaker is Bronwyn Bishop — an absolute disgrace whose behaviour in the Chair has brought the Parliament into disrepute.

In preparing this story, I interviewed diplomats from three Commonwealth countries whose  Parliaments work on the Westminster system — Canada, New Zealand and, of course, the UK.

I asked if the behaviour of Bishop would be tolerated in their Parliaments and the answer was a resounding “No!”

One of them told me of his experience accompanying a visiting MP from his country to Question Time in Canberra .

The MP was just incredulous and said had he been told of her behaviour he wouldn’t have believed it — but seeing her in full flight really shocked him.

Bishop, of course, is a disciple of Tony Abbott’s — she admires his thuggery and take no prisoners attitude.

Bronwyn Bishop today told Parliament that, outside the chamber, she can do anything she likes, as long as it is legal pic.twitter.com/2tRuTOvyIE

And, as though that isn’t bad enough, she is the thrall of Manager of Government Business Christopher Pyne — who actually gives her a wink, a nod or a motion when he wants her to misbehave.

She has removed Opposition MP’s from the House for the flimsiest of reasons — laughing, calling out “Madam Speaker”, or disagreeing with a minister when answering a question.

When the Government want to disrupt the House they arrange for questions to be asked to Christopher Pyne, Scott Morrison and a few other miscreants whose answers outrage the Opposition and usually mayhem ensures.

That gets Bishop going — fairness and impartiality go by the board.

She acts like a school ma’am and usually when she does a remove a Member she give a sly smile to Pyne or Abbott.

The Manager of Opposition Business in the House of Representatives is Tony Burke, a mild mannered former minister whose understanding of the Standing Orders is second to none. When he does object, he is told to sit down in her most imperious and arrogant manner.

Burke has been critical of Bishop her role from day one, when she determined it was acceptable to call Opposition Leader Bill Shorten “Electricity Bill”.

The fact is, Bishop doesn’t want to be the umpire, she wants to be a participant.

She even dismisses points of order without hearing them.

A measure of her misunderstanding of her role is that she continues to attend party meetings, making her an active participant in Government business.

Before she entered the House of Representatives, Bishop was a Senator, where she outraged Gareth Evans, who said she should be strangled with her own scarf.

He is also reported to have said it is easier to hate her at first meeting — it saves time later!

When she was Opposition health spokesperson under the ridiculous Alexander Downer, she amazed people in her own party by announcing her support for the tobacco industry.

She was dropped from health and moved to ‘privatization and Commonwealth and State relations’.

But all that paled into insignificance when she became Minister for Aged in the Howard Government care and was embroiled in her greatest scandal.

The revelation that some residents at Melbourne’s riverside nursing home had suffered  blistering after being bathed in a weak kerosene solution as a cure for scabies. This led to a national outcry over the standard of care in Bishop’s department.

John Howard was again shocked when, in 2005 ‒ backed up by the delightful Sophie Mirabella ‒ she called for Muslim headscarves to be banned from public schools.

Howard said this was impractical.

Bishop’s latest slap down was perhaps her most embarrassing.

She was in the running to lead the Inter-Parliamentary Union — an organisation of parliaments that promotes democracy. She came second to Bangladesh’s Saber Chowdhury in the final round at the assembly in Geneva and there were candidates from Indonesia and the Maldives — a trio of Muslim states.

But it fell apart when she unilaterally declared that Muslim face coverings would be banned from the visitor’s gallery in the House. She claimed she made the decision on the advice of the Security agencies. That was untrue and Abbott made her recant.

Before she made that blunder I wrote to the IPU and enclosed pictures of her and Mirabella standing in front of those disgusting Ditch the Bitch, Brown’s Bitch placard against Julia Gillard, pointing out how inappropriate it would be for her to lead the IPU. 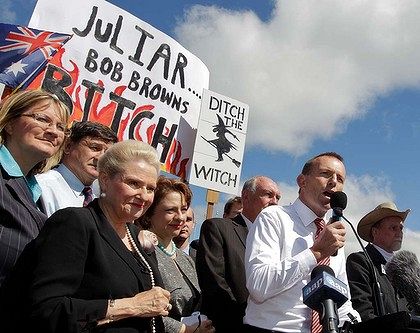 Mr Chowdhury is now the leader.

Bronwyn Bishop is a woman of many parts.

Few of them qualify her for the high office she now holds.

Abbott tells Xi he's visited Australia and Tasmania. Bronwyn Bishop gets his name wrong. What hillbillies they are.