I’ve got Australia’s Prime Minister on the line for you.

Put him through. It is a man I hope. So many of them are going with women these days.

OK. Hi there. How are you? How shitful is it having that trollop Merkel as your next door neighbour!

Angela doesn’t have a home in Potts Point as far as I know.

By far the most dignified response to #Trump #USElection2016 - #AngelaMerkel congratulates #DonaldTrump (kind of) https://t.co/H7q1C8uN9P pic.twitter.com/EPjQf9oJqP

Of course I’d call. What an exciting time to be the president of America. We’re here for you, Donald. America can count on Australia’s full support. You start a war, we’ll be in right behind you, to help you win it.

With Turnbull doing Sycophant PM. That was kinda sickening. https://t.co/OlVXITsyVE

God no! We don’t want to win them too soon. No money in it. We make the big bucks when they drag on and on. No, I couldn’t give a fuck if you’re in our next war. I’ve already got my team working on the next nation we can invade. I hope to announce it on Jan 20; Jan 21 at the latest.

On another matter, I need your advice.

I’m flattered you’re interested in any of my opinions. How exciting. Can’t wait to tell Lucy.

I’ve fucked up. Even worse than you. I wasn’t meant to win. Fuck'n joke. I can’t believe how many dickheads voted for me.

I believe you’re worth a dollar or two. Well, I’m so fucking rich, money is coming out of every orifice of every member of my family.

I’ve got the best home in the world and soon I’ll be forced to live in that shitbox White House. I’ll fucking rename it The Outhouse.

I don’t see how I can help you, Donald. Maybe you could get Alec Baldwin to double for you? He could live in The White House and you could stay in your Tower.

Wouldn’t work. That lowlife is a Democrat. He’d never agree to it.

I want to know how you got out of having to live in the dog’s box you Aussie PM’s have to call home?

Some very bad, really, really bad people wrote our fucking Constitution and it says the President has to live in The White House. I can’t get out of it. Err, don’t take what I just said about the Constitution as gospel. Never read it. Why the fuck would I? Boring. Boring. Boring. Bunch of stiffs wrote it; well those motherfuckers can get fucked.

Donald, I just said I wasn’t going to live there, no matter what.

When I think of what I could do with that land. If only they’d let me knock it down. Great spot for a casino, or a par 3 golf course. Or maybe, an inner city beach resort. 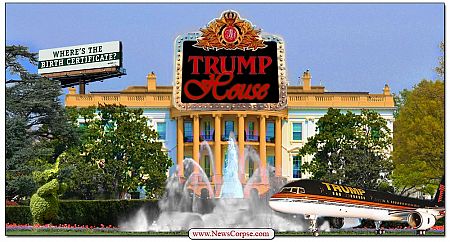 Your winters are a bit grim in Washington for a beach resort.

Good point. Better go. My little Russian buddy has just called. By the way, If you ever need help filling in your tax return, just give me a call. See you buddy.

How exciting was that! Donald loves my balls and will help me with my tax return.

Lucy. Lucy. I’ve got some exciting news. Lucy. Where are you.  Lucy. I can never find you when I want to. We need to get a smaller house.

Rocky Dabscheck is a musician/songwriter and front person for ‘Rocky and The Two Bob Millionaires’. He is also author of Stoney Broke and The Hi-Spenders.

Turnbull having to get Trump's phone number from Greg Norman is possibly one of the most symbolic stories of this year.

It's no laughing matter. Subscribe to IA for just $5.