The Tour de France has been speeding through the English and French countryside and sports reporter Lachlan Barker is travelling with them (via SBS) on a voyage of discovery.

DO YOU KNOW which Brontë sibling is not buried with the others?

Do you know who Dodie Smith is and why she is famous?

Do you know where Thomas Cromwell’s sons were educated?

And I learned all that from the commentary on the Tour de France.

So, here’s a sampling of the things we learned along the cycling way.

This year’s Tour began in Yorkshire, in the north of England, with the first two stages held there. Stage three was in the south — Cambridge to London.

To say that it was popular barely hints at the scale of thing. England turned out in a cheerful throng.

Estimates have it that five million people thronged the roads and byways of England to see the Tour pass by. Sheep were died in colour of the contested jerseys, yellow, green and polka-dotted. Even a café in Holmfirth was spotted up in King-of-the-Mountains colours in celebration of the riders’ rapid passage.

At first, I was just watching the race with my usual avidity, but then I began to pay even more attention to the wonderful commentary of Matthew Keenan, Paul Sherwen and Phil Liggett.

On the second stage, York to Sheffield, the Tour passed through the village of Haworth, and commentator Paul told us the sort of fact that we tune in for.

The race went by the St Michael and All Angels' Church, and Paul told us that all the Brontë children were buried there, with the exception of Anne.

And of course, I had to look that up, but Paul had it at his fingertips.

So what else did we learn?

Dodie Smith was the author of 101 Dalmatians, she wrote it while living at Finchingfield, Essex, a village the Tour passed by on stage three. The idea for the book came about when Smith’s own pet Dalmatian gave birth to a litter of fifteen pups.

Soon we passed a truly venerable building, and Paul informs us that this is Felsted School, founded in 1564 by Richard Rich, the Lord Chancellor of England at the time. Not only that, but we learned that the school only became genuinely co-educational in 1993 and that Thomas Cromwell’s sons were educated there.

We raced on through the south-east toward London, on the way we learned that the Church of St Mary and St Laurent dates back to the 1100s.

With London looming and a finish in front of Buck house, Paul then told us that the Horse Guards were founded in the late 1660s.

He mentioned this because the roadway in front of the palace were the Horse Guards parade has been coated with a special non-slip surface to stop the horses falling over.

This, Paul and Phil then discussed, wondering if it would affect the travel of the bikes over the same surface.

We also learned that the Chelmsford Cathedral – celebrating St Marie, St Pierre and St Ced – was built 800 years ago.

Further Chelmsford facts include that Marconi started the first commercial wireless and telegraph company there.

Then on to Epping, which the Sydney suburb is named for, there we learned that Epping Forest, which the cyclists traversed mostly out of site due to the magnificent trees, is only there because it was saved by an act of parliament in 1878.

Stage four was the first in France on this year’s Tour.

There we learned that the Abbey of St Paul, in Wisques was built in 1889 and that Le Chateau of de Phillipe de Commynes was built in 1290 by the Count of Flanders — the famous Flanders fields being nearby.

Stage five then launched on Wednesday night Australian time, and the commentary team paid homage to the many war graves from the First World War that the bike race passed as it moved through the area. Then boat lifters on canals, gothic town halls, and anything of interest was described to us as we went.

Stage five was also most interesting on the bike front, as it traversed the dreaded cobblestones.

These cobblestones are better known from the one day classic race, The Paris-Roubaix (pronounced Pa-ree roo-bay).

As you can see from the graphic, you would think twice about doing this stretch on a squashy-wheeled mountain bike. To do it on a slick, thin-wheeled road tourer takes nerves, and buttocks I might add, of steel.

When this section was planned, it was thought the stage would be ridden in hot summer weather, with dust the main concern. But, when the riders took to the road for the stage, heavy rain was the order of the day and so the cobbles took on an extra-threatening slickly wet tone. 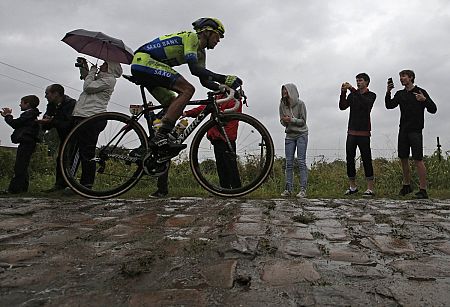 Alberto Contador of Saxo-Tinkoff rides across the dreaded cobbles of stage 5 (Image via businessinsider.com)

Thus, and even before hitting the cobbles, there were crashes aplenty (41 were officially recorded). The most noticeable of these was pre-race favourite Chris Froome, number one rider for Team Sky

He went down for his third crash in two days, and had to retire from the tour with a suspected broken wrist and other graze and cut injuries.

The detailed knowledge of the commentary team – or their research team – was best evidenced to me at the close of stage six.

In the last twenty kilometres of each stage, the pressure goes on and the teams pick up the pace as they jockey for best position for their main man at the finish line. The teams were racing down the road when the Spanish Champion, Jon Izagirre, popped into view on the edge of the pack.

Paul then told us he was the Spanish Champion, evidenced by wearing the Spanish flag on his jersey.

He added that he was a Basque, an indigenous group from the north of Spain and then, while the pedals flew, Paul mused:

“I wonder if he had time to notice the memorial to the Basque fighters of the world wars we passed a few kilometres back?”

We also learned that German Sprinter Andre Greipel is known affectionately as the “Gorilla”, due to his size and strength, and mighty sprint power.

The first Chinese rider in the tour, Ji Cheng, is known as “the breakaway killer”, due to his willingness to head the pelaton and stop riders getting away.

We learned Luis Ángel Maté Mardones is known as the “Andalusian Lynx” because he comes from Andalusia and strikes at the finish line like a predatory big cat.

He is two seconds ahead of his Danish team mate, Jakob Fuglsang.

Slovakian Peter Sagan of Canondale is third, 44 seconds behind Nibali.

Frenchman Bryan Cocquard of Team Europcar is second with 146, while German Marcel Kittel of team Giant-Shimano is third with 137.

Sprints in the middle of the stage are usually worth 15-20 points, with the first fifteen riders to cross the sprint point winning points in descending order.

Winning the bunched sprint at the end of a sprint stage scores 45.

King of the Mountains (Polka-dotted Jersey)

Frenchman Cyril Lemoine of Cofidis wears the Polka-dotted Jersey for King of the Mountains with six points.

His compatriot, Blel Kadri, of team Ag2R-La Mondiale is second with five, while German rider, Jens Voigt of Trek Factory Racing is third with four points.

Please note: so far we have been doing flat stages; this jersey competition kicks into high gear in the coming week in the Alps and the Pyrenees.

Peter Sagan leads here, but as he is already wearing the Green Jersey, thus the second placed rider in this classification, Poland’s Michal Kwiatkowski of team Omega Pharma-Quick Step actually wears it on the road.