With reporting season for LNG companies here, Lachlan Barker crunches the numbers and predicts that, by 1 January 2018, Santos will have lost half a billion U.S. dollars on their Gladstone liquefied natural gas plant, GLNG.

WITH REPORTING season for the LNG companies upon us, the usual gas industry mouthpieces have been quick off the mark, reporting their usual rubbish about how viable and important this toxic industry is.

This is probably best exemplified here by the Office of the Chief Economist forecasting LNG value to rise in 2018 to A$37 billion.

However – and as usual – value is one thing, profit is another thing entirely — and Santos for one is not gonna show that.

Okay, so since the Industry Economist is forecasting to 2018, I will as well. By 1 January 2018, Santos will have lost half a billion U.S. dollars on their liquefied natural gas plant, GLNG.

So with the usual acknowledgement of not putting too much eye-glazing over math in the article, here are the half year results for 2016 to give some background: 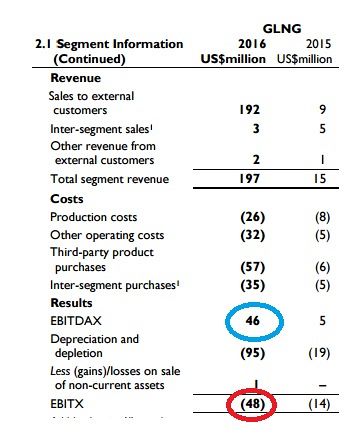 The LNG companies use EBITDAX to try to claim their underlying business model is sound, but nothing could be further from the truth, as we shall see more of below.

So for Santos GLNG, I plugged in the figures and got an answer for depreciation for the GLNG plant of US$125 million a year, US$62.5 million for the half year.

Depreciation means essentially that companies can pay off large capital purchases over time. Now the problem for Santos is that they list the life of the GLNG plant as 25 years, and so for every one of the next 25 years they are going to have to remove US$125 million – or more – from the profit margin.

Santos use the per unit or cost measure per mmbtu extracted, and the figures reflect the cost to extract each mmbtu. So for the full year 2016, Santos will report approx US$63 million lost to the balance sheet to depletion.

But then we come to well drilling, which I assert needs to be added to production costs in the case of onshore gas.

Offshore gas and oil doesn’t have ongoing well drilling to be paid for; you tow your rig into place on the ocean, send down eight or ten holes, then the gas or oil comes up the pipes to your drilling platform.

However, onshore gas has to continually drill more and more wells to find new pockets of gas in the pleats and folds of the geology.

Santos has been drilling approximately 20 wells a quarter at the Roma gas fields in Queensland, in a frantic attempt to keep the gas supply up to GLNG. They list the costs of well drilling at about US$1.5 million and so if well drilling costs are added to that EBITX line, Santos will report a US$211 million loss on GLNG for 2016.

Lachlan Barker's projections based on the half year results.

Here is the full chart for those who like looking at spreadsheets: 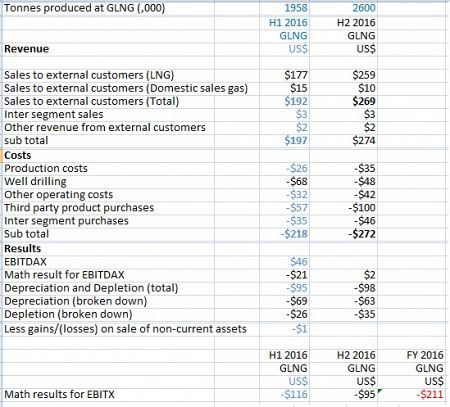 The blue numbers come from Santos’s reports, while the black numbers are my projections, or where I have broken down the Santos reported numbers into their component parts.

(As a general reference, I remind you LNG prices are pegged to those of oil for historical reasons.)

Here is the summary chart for 2017, given the predicted oil price of approximately US$55 a barrel:

As you can see for yourself, by the time 2018 rolls around, Santos will have lost a little over half a billion US dollars on GLNG.

And if you are skeptical about my projections, I would highlight this table from the Santos half year report:

In 2016, they wrote down the value of GLNG by US$1.05 billion post tax. Taking that out of the equation, you can see that for both years their all in costs to get US$1.2 billion revenue, were nearly 100 per cent.

While the price of oil and thus that of LNG may be going up, thus increasing their revenue, well drilling and third party gas purchases for the GLNG segment will be increasing as well, raising their all in production costs at the same time.

For the future, Santos claim to have approval to drill 6,100 wells in Queensland to feed GLNG, and given the ~25 year life of the plant, that is close to 250 wells a year at US$1.5 million a pop and so an annual cost of about US$350 million.

So that tells us that US$175 million has to be added to each half year’s production costs for Santos for the future beyond 2018, leading to projected loss at EBITX level for 2018 – at projected LNG prices – of US$357 million.

But then, adding to Santos’s woes is they seem to be running out of gas and are having to buy increased amounts of third party gas, which is expensive and dents their profit margin considerably.

As can be seen here, since they began exporting LNG from GLNG in Q4 2015, their amount of third party purchased gas has increased.

Also, the blue line shows gas delivered to the plant, which should be continually increasing in this ramp up phase. However, in the most recently reported quarter, the amount of gas decreased, highlighting the problems Santos are having with the flow rates of gas from their Roma fields.

However Q3 and Q4 2016 both reported GLNG producing 1.3 million tonnes, if they are going to export six million a year, clearly this recent quarter should have shown a production of 1.5 million tonnes.

So I’d suggest they have already plateaued and will be exporting only 5.2 million tonnes (or less) a year for the foreseeable future.

By the way, I contacted Santos and asked them if there would be any penalties for breaching those contracts for 7.2 million tonnes a year, but they didn’t reply (as usual).

So I’d suggest those much-crowed-about contracts are worthless, as there seems to be no penalties for breaching them.

I say Santos’s true break-even price – once they include depreciation, depletion and well drilling costs – is closer to US$75 a barrel, not the US$38 they claim — and some optimistic forecasts, like this from The Balance, see the price of oil getting to US$75 by 2020.

However this won’t do Santos any good, as their debt matures in 2019 and all the way up until then they will be reporting losses in the quarter billion plus range, adding to the already considerable debt they have now (US$4.3 billion reported in November 2016).

And, I might add, I have seen just as many stories predicting the price of oil could go the other way, like this from the Wall Street Journal (excerpt from IEEFA):

Which is headlined thus:

'The most understated risk to oil prices would be a toxic combination of faster-than-expected U.S. interest-rate hikes next year, a much stronger dollar, and a potential trade war with China,” the bank said in a report last week. “Oil prices could slip back below $40 a barrel under that scenario.'

Santos will limp onward to 2019 losing money all the way and, with the onshore gas model in Queensland shown to be irretrievably broken, their Queensland liquefied natural gas debacle will continue to drag them down.

Keep an eye on the COAL-ition! Subscribe to IA for just $5.