Lachlan Barker has been closely following the fortunes of Australia's largely uneconomic fossil fuel industry; this story was his most popular for 2016.

The oil price war is inflicting further damage on Queensland's collapsing LNG industry. Lachlan Barker does the math on the future of Santos, QGC and Origin.

IT'S REPORTING season for the resources companies with a range of fourth quarter reports being published.

It’s a sea of bad news for the coal and gas sectors, and sphere of the resources area that is in a world of trouble is Queensland’s CSG-to-LNG projects.

The price of LNG is linked to that of oil for various historical reasons, and as is generally well known, the oil price has crashed big time.

The oil price crash is largely due to OPEC maintaining high production levels in an attempt to drive U.S. Shale oil companies out of business.

However the U.S. oilers are proving remarkably resilient and this price war has been going for a lot longer than anyone – including OPEC I suspect – bargained for. 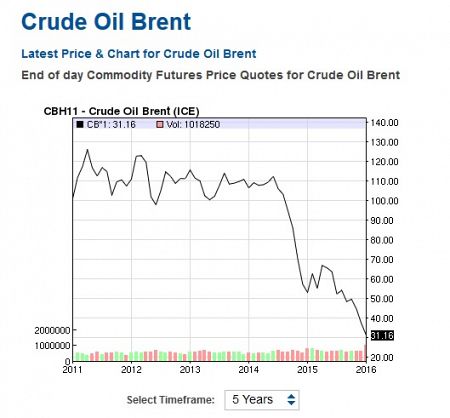 In all wars, there is collateral damage and, in this case, the damage from the oil price war has fallen on the LNG industry, particularly the Australian onshore gas industry in Queensland which has some of the highest production costs of gas on Earth.

Thus the big three companies operating in Queensland – Santos, Origin and QGC – are starting to discover just how bad a folly they have committed.

Gas in Queensland is all about exporting liquefied natural gas (LNG) to Asia, and to this end all three companies built mind-numbingly expensive LNG plants at Gladstone.

These three plants cost – figures vary, but at least - $60 billion to build and even now one can’t help wondering what on Earth they were thinking?

Of the big three in Queensland, QGC are best placed to survive. QGC is the onground manifestation of BG-Group, which is in turn contemplating a merger with Royal Dutch Shell. However I will refer to them as QGC for this Australian-based article.

QGC, through their parent, have staggering amounts of capital available to them, and so will not go bankrupt. However, their Queensland CSG-to-LNG business is the worst performing arm of their global business and so even they must be currently looking at the Queensland books and wondering how long they are prepared to run an underperforming asset.

Of the other two, we are already hearing that Origin – who feed their coal seam gas into the US$17.5 billion APLNG plant at Gladstone – are in all sorts of trouble. Moody’s Investor Service indicating that, already, they cannot service their monster debt on the plant.

I don’t have immediate tight figures on Origin, but will go forensic on their accounts sometime in the upcoming weeks, however what I do have is figures for Santos, and they show all too clearly what an enormous blunder CSG-to-LNG was/is in Queensland.

The Santos plant in Queensland is known as Gladstone Liquefied Natural gas (GLNG). It cost US$18.5 billion, and is the likely cause of Santos going bankrupt.

I tracked back over Santos’s quarterly reports to the beginning of 2013 and learned an average price that Santos received for their LNG.

It is shown here on this chart, and is correlated to the industry standard spot price marker, the Platts Japan Korea Marker (JKM).

The figures show here that Santos were getting on average US$1 above the spot price JKM for the period.

This is about right as the rough rule of thumb in the industry is that contract prices will be about a dollar higher than the more volatile spot price.

The chart also gives the first glimmerings of why Santos – and QGC and Origin for that matter - are in so much trouble.

Goldman Sachs has released their forecasts for the JKM spot price through to the end of 2019, and it’s a bloody and gangrenous thing for Santos to read.

As you can see the green line shows the costs of LNG production for Santos at the GLNG plant, and from early 2016, the price Santos will receive drops below that ominous green line.

Santos will be selling gas at a loss for the next four years.

How bad is the loss? Bad. 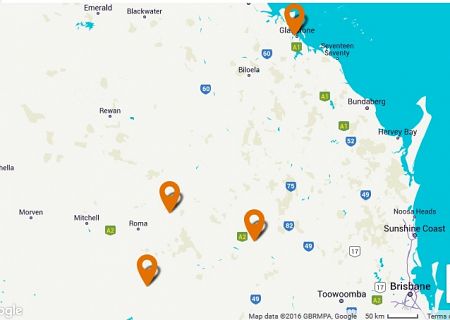 I’ll  clarify those costs here:  The production costs of the gas Santos feed from the CSG fields in the western Darling Downs, around Roma, run at US$3.50 at the current exchange rate of 0.7, liquefaction and shipping fees, another US$3.50.

Total production costs therefore stand at US$7 even.

Santos produced 544,000 tonnes from one train at the GLNG plant in ten weeks of quarter four of 2015.They claim they will have train two operational in quarter two of 2016, and if that optimistic forecast comes true, and train two produces at a similar rate, then Santos will produce approx 3.8 million tonnes in 2016.

With the Goldman Sachs forecast price of the JKM at US$5.80/Gj, and therefore Santos’s projected price for the year at US$6.80/Gj, then Santos will lose US$0.20 on every gigajoule they produce.

If, against all the history of engineering Santos miraculously double production for 2017 to 7.8 million tonnes, then that unfortunately for them coincides with the forecast price of Santos gas going down again, to US$5.91.

In 2018 the price descends again to US$5.49, what the Queensland LNG companies pray is the cellar, but there is no certainty on that I can assure you. This low price is also projected for 2019.

By the way, if you were idly wondering why production costs are so expensive, one reason is the phenomenally energy intensive nature of the liquefaction process.

The three LNG plants at Gladstone use approximately the same amount of power as the entire state of Tasmania. (~9000 Gwh).

Also, unlike offshore gas collection where you just drill your hole, then the pressure of the ocean keeps the gas coming up the pipe without interference, onshore gas involves the constant drilling of new wells to continually find little pockets of gas in the pleats and folds of the geology.

Wells run at around A$0.5 million per well (a 2012 estimate from Geoscience Australia), but I have heard anecdotally that some wells now cost as much as A$2 million per well.

It is reported that Queensland’s LNG companies are going to drill another ~30,000 wells up there, so that’s a conservative estimate of A$15 billion just to drill the wells.

So Santos is in a gigantic, staggering financial mess, it is difficult to see any way they can survive. 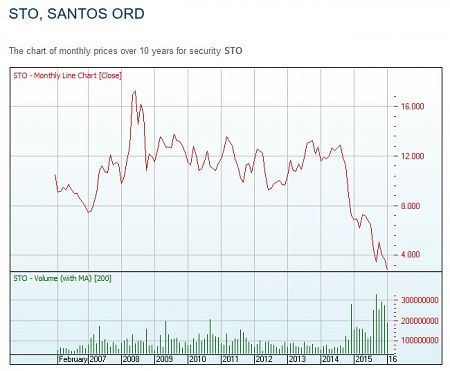 Whoever their debt is loaded with, will have to start examining just how long they are going to let Santos add to the amount of money owed.

Former federal resources minister and the spin dogs at the Queensland Resources Council have this bizarre dream that Australia will become an energy superpower, based on LNG and coal export.

Well we can hardly be that with the LNG companies exporting gas at loss for the next four years, and two of those companies tottering under mountains of debt, now can we?

The tattered remains of the mining industry’s dream of becoming an energy superpower are best described using the words of Leonard Cohen; so of that dream we can say simply:

Great story by @Jarrapin 'Australia’s CSG industry — no longer such a gas'. http://t.co/FkpyLN6C

Note: IA were predicting a bleak future for CSG three years ago.