Many people seem to think Morrison is a good leader. Others think he is a prick. Either way, he has lasted longer as PM than anyone – prick or otherwise – could have imagined. Founder and director David Donovan and managing editor Michelle Pini delve deep to uncover the truth.

IF AUSTRALIA'S wildly inaccurate and totally discredited opinion polls are any guide, many people think Scott Morrison is doing a good job as Australian PM. Then again, other polls say up to 87 per cent of people push-polled by ReachTEL and Newspoll are, in fact, complete idiots.

Quite a few other people, some as far afield as France, say Scott Morrison is a useless prick. As to which of these contentions is most accurate, we couldn’t possibly comment. 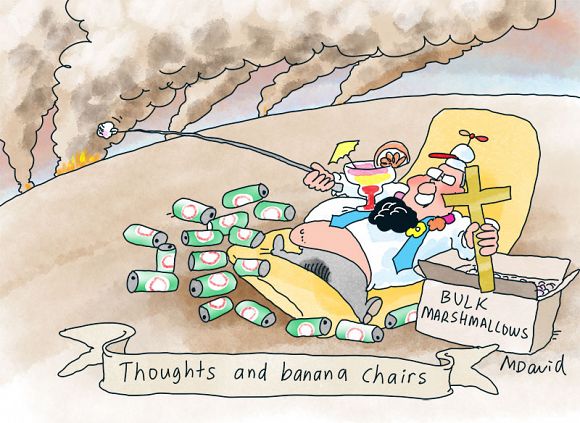 The best way to look at Scott Morrison is to consider his achievements.

The second item is a reference to Scott Morrison’s time as head of Tourism Australia, where he gained notoriety with his “Where the Bloody Hell are Ya?” campaign. It involved model Lara Bingle at the beach in a bikini, bouncing around for the camera, before uttering that bogan inanity.

Like Lara’s bikini, the ad made quite a splash. Except for Morrison, it was egg splashing all over his face. Though it did bounce Morrison into the public gaze — and then straight back out again, after he was precipitously terminated from his employment at Tourism Australia.

How good is that?!

In short, prior to entering politics, #ScottyFromMarketing was sacked from every marketing job he ever held.

But Morrison turned things around after entering politics. Before, he was the incompetent idiot who couldn’t keep his job. After entering politics, however, he’s become the bloke who keeps his job, despite being the gormless buffoon creating a shitstorm at every stumbling turn.

And that’s not as easy as you might think.

In his earlier political career, Morrison displayed all the necessary traits to lead. In fact, he excelled by managing to gain, in 2007, the Federal seat of Cook after losing Liberal Party preselection. Later, he became the “brains” behind Robodebt, which led to the Federal Government paying out a $1.2 billion settlement for demoralised welfare recipients. Along the way, Morrison made official abuse of refugees an artform of unaccountability.

His nickname on Independent Australia during these years was “Psychotic Scott” — which may or may not have been an accurate summation.

A smirking Morrison measured Malcolm Turnbull up well before he relieved the latter of his prime ministership — inadvertently and totally "accidentally", of course. Somehow, Morrison managed to retain power at the 2019 Election, which most pundits thought he must lose — an astonishing achievement, some may say.

Then there’s Morrison’s record as PM — one of failure, gross failure, abject failure and endemic corruption. You could say, his record of failure is second to none.

In 2019, he announced Australia was “Back in the Black”, even though the nation was still massively in deficit. He based this on a close reading of the entrails of a virgin goat sacrificed during a full moon on a bleak and windswept Canberra hilltop on a misty night in May.

When the figures came in, they showed, instead, he’d blown out the deficit and tripled the debt — but really, who’s counting?

When the bushfires came, Scotty fled — to Hawaii. And when he came back, he tried to shake hands with everyone, whether willing or not. If a singed koala had been close by, #ScottyFromPhotoOps would no doubt have tried to press its charred flesh too.

It led Eamon Sandwith of The Chats to write this song: ‘I Hope Scott’s House Burns Down.’

It takes a certain sort of leader to earn such a heartfelt tribute.

And after lobbing a lump of carbon around Federal Parliament, Scotty had a moment of inspiration. What Australia needed, he declared, to recover from its first recession in 30 years, was a fossil fuel-led recovery! Apart from the world’s scientific community and, these days, even most fossil fuel companies, who could argue with that?!

Then, when COVID struck, Scotty did nothing for months. And then when the states decided that they must act, he still held off until Monday of the following week. Until after his beloved Hillsong Church could congregate. Then he raged. He raged at states stopping kids going to school. He raged at Labor states suffering second waves. He raged at states who had avoided reinfection by not opening up their borders sooner. In short, Morrison did everything a leader could do to perpetuate the pandemic. And, according to certain polls, most Australians loved him for it.

If polling companies are to be believed, which they aren’t, many people seem to think Morrison is a good leader. Others think he is a prick. Either way, he has lasted longer as PM than anyone – prick or otherwise – could have imagined.

The Peter Principle states that a person will be promoted 'until they reach their level of incompetence'. Once again, Scott Morrison is the exception to the rule. Because #ScottyFromMarketing AKA #ScottyFromPhotoOps with his degree in “economic geography”, which is almost certainly not even a thing, should be working in a pie van at best. As Prime Minister, we shudder to think of him being promoted to an even higher level, so as to reach his apparent level of incompetence.

Where the bloody hell are they?

In summary, if Scott Morrison is a prick, how good a prick is he?