I have been active in reporting and commenting on politics in Australia and overseas for almost 60 years and I have seen and heard politicians of all political persuasions state their cases — some articulating them well, others in a style best suited to themselves or their constituencies.

I must admit, I have been taking notice of you with more than just a passing interest and never have I seen a man so ill-suited to handle a task as sensitive as immigration as you.

Do you realise that, as well as being a minister and member of Parliament, you are nothing more or nothing less than a public servant on the public payroll, which is funded by Australian taxpayers.

As such, your performance, I think last Thursday, at your media conference was an absolute disgrace.

Your rudeness hit a new low, even for you, and that’s saying something; your arrogance and your patronising manner was sickening.

A few weeks ago, when answering an Opposition question regarding the Asylum seekers (not illegal immigrants) imprisoned on a Customs vessel at sea, you sneered at the questioner and you attempted to smear him by implying he was blaming the vessels crew for keeping men women and children locked up in windowless cabins and allowed fresh air for only 3 hours a day.

You know full well the crew was under instructions from you to follow those inhumane orders and for them to refuse would amount to a mutiny.

I understand that, like Tony Abbott and Kevin Andrews, you claim to be a practising Christian. If what you three men do to helpless, hapless and desperate men women and children, well, it’s a different form of Christianity that most people accept.

You know Minister, if the Parliament was not under the control of a biased outrageous Speaker whose orders come from the likes of Christopher Pyne, most of your answers would be ruled out of order. You give the impression you are suffering from a psychotic condition, which under normal circumstances would require medical attention of a psychiatric nature.

Members of the public want to know who murdered that young Iranian man held by you in custody. Where is that inquiry going?

How many men women and children are self-harming while under your care?

What financial arrangements have you come to with the Government of India to provide a consular contingent to interview those now on land after their ordeal at your hands at sea?

And even you would know the Indian public service is known as one of the world’s most inefficient and corrupt groups of men and women found anywhere. How long will those interviews take?

Your mishandling of your portfolio is disgraceful and so are you.

I look forward to your reply.

In the meantime rest assured this will be distributed widely. 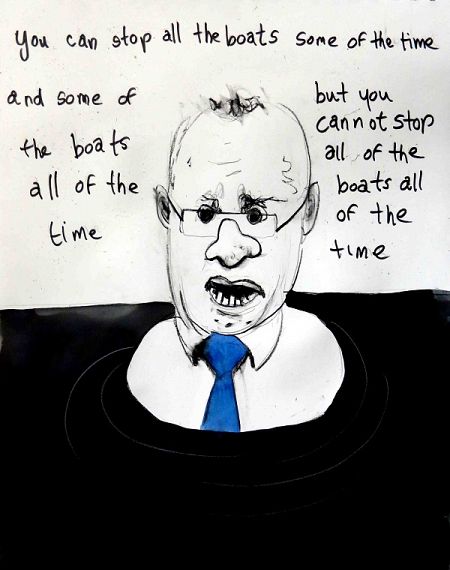