BUDGET 2019: Back in the black Budget just another cash splash

Treasurer Frydenberg has boasted about returning the budget to surplus and paying down the debt — but managing editor Dave Donovan, reporting from the Budget lock-up, sincerely doubts it.

AS TREASURER Josh Frydenberg and Finance Minister Mathias Cormann strode into the Budget Lockup, side-by-side this afternoon (2 April), both beamed radiantly. Of course, this might have been merely for the cameras waiting for them just inside the doors — although they did really look like they were about to break out the cigars in the courtyard.

And this might be because they really do think this is the Budget that turns the relentless tide of negative polls. The one that puts them back on track to win the only poll that matters — the Federal election, which may be called as early as this weekend.

“…the Budget is back in the black and Australia is back on track…. all without increasing taxes,” was the Frydenberg catch-cry in his 2019-20 Budget Speech tonight, Tuesday, 2 April 2019.

The Budget, of course, has been put forward from its usual May date to allow for the Federal election, expected to be held in May. Perhaps the budget speech should have been moved forward an extra day, to April 1?

The main takeaways from this Budget were “taxation relief” (formerly known as tax cuts) and “Budget returns to surplus” — not this year, of course, but next year.

This was confirmed in Josh and Matt’s joint pre-Budget speech press conference.

Although there was cursory mention of some other Budget initiatives ‒ such as $1 billion to the ATO to tackle multinational tax avoidance; $400 million to ASIC and $150 million to APRA to support and tighten its supervision and enforcement regime over the beleaguered financial services industry; $1.8 billion on power bills and emissions; about $3 billion of new infrastructure spending, mostly on new roads; and a tiny amount of “tax relief for small businesses” by accelerated depreciation measures and a small tax cut ‒ this is really nickel and dime stuff compared to Frydenberg’s $158 billion cash splash on personal income tax cuts.

Frydenberg and Cormann hammered the message that, because of their prudent spending and sound economic management, they have been able to return the Budget to surplus this financial year and will pay down the debt — by 2029-30. And moreover, that “irresponsible Labor” will be “increasing taxes by $200 billion” to pay for their election promises.

In fact, as the trendlines (in red) from the following table shows, increases in tax to GDP appear to remarkably coincide with Liberal ‒ and not Labor ‒ governments. 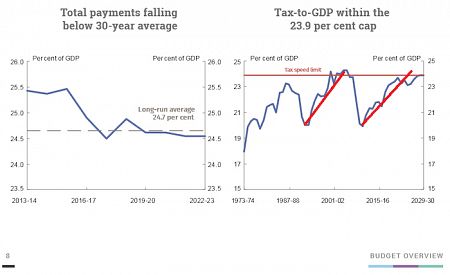 So, let’s bypass the nickel and dimers for now, and focus on the Government’s “back in the black” predictions.

BACK IN THE BLACK — REALLY?

Predicting the future is a fraught business, especially in the field of finance. And in the case of this Budget, there are several reasons to believe that getting the Budget “back in the black” by next year ‒ let alone paying down the debt by 2029-30 ‒ are based on some heroic, if not downright foolhardy assumptions.

‘The economy is expected to continue to benefit from solid global growth.’

Yet in the next sentence, it says:

Then on the following page:

‘As always, there are a number of risks and uncertainties around the forecasts. Internationally … downside risks remain around trade tensions, emerging marker debt vulnerabilities and geopolitical issues.’

The truth is, given the Brexit chaos, the marked downturn in the Chinese economy and the uncertainty surrounding the United States, GDP bullishness at this time seems irrationally exuberant. Especially given nominal GDP and the terms of trade have been boosted since MYEFO by higher than expected commodity prices, particularly in iron ore and metallurgical coal. There is no reason to suppose this growth will be sustained into the future.

Secondly, the surplus is predicated on unemployment remaining at its current rate of 5% – its lowest rate in more than seven years – and that these tight labour market conditions will cause increases in both wages and inflation. Treasury predicts the wage-price index to increase from its current 2.5% to 3.5% in 2021-22; and that CPI will grow from its currently subdued 1.5% to 2.5% to 2. However, given the depressed nature of the housing market and record high levels of household debt, it is difficult to see any reason to suggest Australia’s stagnant wages or household spending is suddenly set for a boost.

It's important to remember, also, that the Budget is still in deficit by $4.1 billion this financial year — next year's surplus is only a prediction.

In fact, there is every reason to suppose the budget will not return to surplus next year under a re-elected Coalition Government. This is a pre-election Budget and, as such, it is filled with promises it is never likely to keep.

Scott Morrison has delivered an election con, filled with the same Liberal cuts. After six years of the Liberals’ cuts and chaos, there's no plan for wages and the same cuts to hospitals, schools and pensions. #auspol #budget2019 pic.twitter.com/lP0W61xdX0

WHAT’S NOT IN THE BUDGET

This is a Budget aimed at swaying enough middle-income voters, who may have been tempted to swing to Labor, to get the Government over-the-line in May. As such, it also includes big boosts in spending for defence, ASIO and the Home Affairs Department — to keep the comfortable middle class still feeling safe and secure in their pleasant suburban homes.

What it does not include is very much at all for people who don’t often vote for the conservatives — such as the poor, the needy, the unemployed and the homeless.

The Government has, it must be said, provided $309 million to improve access to diagnostic imaging, $379 million for 53 new MRI licences, $331 million to list new medicines on the PBS and $328 million over four years to combat domestic violence against women and children. These should benefit some disadvantaged Australians but are dwarfed by other measures — such as tax cuts for people earning more than $45,000.

There is no increase, on the other hand, in unemployment benefits, nothing about increasing the minimum wage and no measures to provide housing for the homeless. The Government is providing a rebate of $125 for couples and $75 for singles to help pensioners and carers with their power bills, but not the jobless — it seems they can help themselves. The elderly are more likely to vote conservative, it seems, as shown by a package of measures announced to help those in aged care.

Josh Frydenberg and Mathias Cormann have labelled this the back-in-black Budget, and their smug grins tonight (2 April) suggest they are pretty pleased with themselves. But for the working poor and the unemployed, this is another Budget that bypasses them in favour of the better-off.

This is, in fact, a cash splash Budget, built on unexpected assumptions that are likely to leave the country even further in debt.

Me in the Budget lock-up. So much fun. pic.twitter.com/wh1eCwZt8Z

@JimboStanford from @CntrFutureWork tells it like it is on #Budget2019;

"The crisis in wages and hence, in household incomes, is the biggest challenge facing Australia's economy - but this Budget has nothing to say about it."@TheAusInstitute #auspol pic.twitter.com/enrlW7WTrO